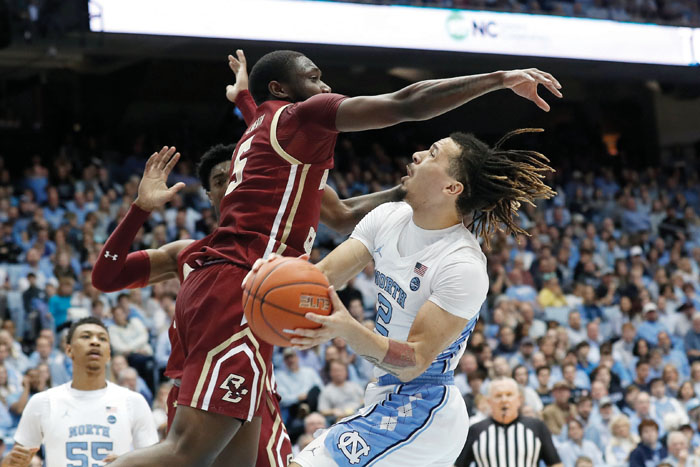 CHAPEL HILL (AP) — Jared Hamilton grew up in North Carolina rooting for the Tar Heels. In his first game at the Smith Center, the home team could have used him.
Hamilton scored 18 points and made 2 of 3 free throws with 17.2 seconds remaining to lift Boston College to a 71-70 victory over North Carolina on Saturday night.
Derryck Thornton added 15 points for the Eagles (11-11, 5-6 Atlantic Coast Conference), who spoiled the return of North Carolina point guard Cole Anthony after a seven-week absence.
“This means everything,” said Hamilton, who is from Charlotte and had more than 20 family members and friends in attendance. “This is a huge win for us. This is a huge win for our program. It’s really a turning point. I think this team, if we stay where we’re at right now, the sky is the limit.”
Jay Heath scored 12 points and Nik Popovic had 10 for the Eagles, who snapped a 12-game losing streak to North Carolina. Boston College picked up its first win over the Tar Heels since Feb. 20, 2010.
Anthony, North Carolina’s star freshman point guard and leading scorer, had 26 points in his first action since he had arthroscopic surgery Dec. 16 to repair a partially torn meniscus in his right knee. He came off the bench in each half, shooting 5 of 14 from the field and making all 14 of his free throws.
Anthony scored in the lane to give the Tar Heels a 70-69 lead with 29.7 seconds left, but his desperation 3-pointer just before the final buzzer came up short.
“With a great player like that and the ball leaves his hand with three seconds to go, your life stops for a minute right there,” Boston College coach Jim Christian said. “But fortunately for us, it didn’t go in.”
Brandon Robinson had 12 points on 5-of-16 shooting for North Carolina (10-11, 3-7) before leaving the court with a sprained right ankle after fouling Hamilton on the game-deciding 3-point try.
Armando Bacot added 11 points and 10 rebounds, and Garrison Brooks had 10 points and 10 rebounds for the Tar Heels. North Carolina shot 22 of 61 (36%), including 4 of 19 from 3-point range.
BIG PICTURE
Boston College: With five losses in their previous six games, the Eagles needed this one. They matched their ACC win total from last season and stayed within striking distance of a .500 record in conference play, something they haven’t achieved since the 2010-11 season.
North Carolina: The Tar Heels had some momentum after back-to-back wins against Miami and North Carolina State, and Anthony’s return figured give them a boost. But they came up short at home in a game they needed to win. “It’s a little deflating to lose a game like that at home,” Anthony said. “But at the end of the day, there’s a lot of basketball left to be played. Our season is not over.”
LATE-GAME CONFUSION
Boston College played zone defense on the final possession, and the Tar Heels looked confused as the clock dwindled while Anthony dribbled. North Carolina coach Roy Williams said he wanted his team to attack the basket. Anthony took the blame, saying that he should have called timeout or shot sooner to give his team a chance to get an offensive rebound.
“I let my team down with that play,” Anthony said. “That was my fault.”
RETURN OF A VILLAIN
Thornton was one of three Boston College players with four fouls midway through the second half. But instead of getting timid, he got aggressive. He scored 13 points in the final nine minutes, including eight in a row for the Eagles down the stretch.
Thornton improved to 2-0 at North Carolina. He started his career at Duke and had the clinching blocked shot in the Blue Devils’ 74-73 win at the Smith Center in 2016. He later spent two seasons at Southern California.
“It’s crazy where God takes you,” Thornton said. “Just being back here, it’s a great feeling to be able to win with this group of guys and these coaches.”
TIP-INS
X-rays on Robinson’s right ankle were negative. … The Tar Heels outscored Boston College by 11 points in Anthony’s 26 minutes. … Brooks was 0 for 7 on free throws in the second half, giving him nine consecutive misses dating to North Carolina’s previous game.
UP NEXT
Boston College: The Eagles host No. 9 Duke, whom they’ve beaten one time in the last 13 meetings, on Tuesday night.
North Carolina: The Tar Heels play at No. 5 Florida State, which is 10-0 at home this season, on Monday night.
___
For more AP college basketball coverage: https://apnews.com/Collegebasketball and http://twitter.com/AP_Top25