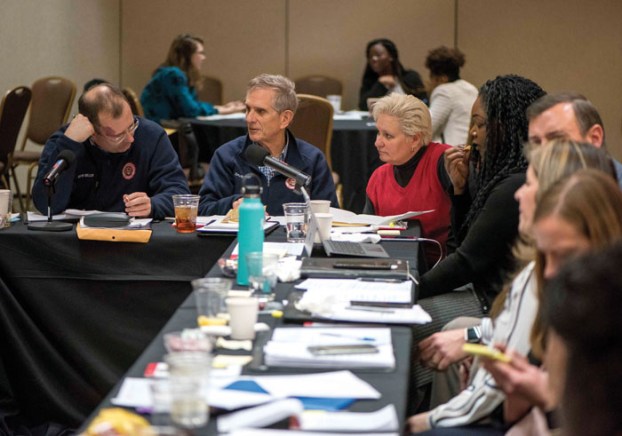 JON C. LAKEY/SALISBURY POST Salisbury council members Brian Miller, David Post and Tamara Sheffield work together to brainstorm ideas during council retreat. The annual City Council Retreatr is being held this week. City Council members and key city staffers gathered at the Livingstone College Event Center on Jake Alexander Blvd. Moderator Warren Miller, from Fountainworks Facilitation and Management Consulting, took time on Thursday afternoon to pose questions to the city council members about what they as the elected leaders want to see Salisbury in the next 10 years. Salisbury,North Carolina,1/30/20.

SALISBURY —The city’s recycling contract expires at the end of the current fiscal year, and as costs increase the city will need to evaluate its options, said Public Services Director Craig Powers during the first day of the Salisbury City Council’s annual planning retreat Thursday.

The city currently has contracted universal collection in which every resident gets a recycling bin. An estimated 93% of municipalities use this method, which increases collection amounts but causes a high amount of non-recyclables to get in the system.

With a soon-to-expire contract, stormwater technician Michael Hanna presented four options for city government — contracted opt-in collection, contracted opt-out collection with an amended ordinances, eliminating curbside collection and replacing it with a recycling center and universal in-house collection. The cost for recycling services is affected by the degree to which recycling is contaminated.

The city currently has a 25% contamination rate. The national average is 5-10%.

Hanna recommended the opt-out option with an amended ordinance, which will involve enforcement telling residents they are recycling wrong through “oops tabs.” The city can also remove the can if it is being misused. He said some use their recycling bins as a second trashcan.

But a central question, Powers said, was what the city could afford.

The council asked Thursday to see money amounts for recycling options presented. City Manager Lane Bailey said estimates should be ready in May.

Council Member Tamara Sheffield said the city need to decide if the community is one that recycles, doesn’t recycle or “kind of recycles.”

“We have to decide that first and then we have to find the cost,” she said. “I don’t feel comfortable letting the cost drive that moral decision.”

Council Member Brian Miller said citizens have continuously asked him to take some of the city fees off of their backs. He was concerned about an added costs to citizens. Miller said he believed a recycling center would be cheaper.

But Mayor Pro Tem Al Heggins said some would not be able to recycle due to lack of transportation to a recycling facility.

Mayor Karen Alexander asked if there was a possibility to survey the public to understand their preferences.

Retreat facilitator Warren Miller gave a task to staff for exploring options, finding out costs and equity issues that come with the different options.

In a related matter, Administrative Services Director Kelly Baker spoke about the start of the city’s initiative to reduce its carbon footprint.  She said the city is about average nationally for its carbon emissions, with housing as the largest emitter and transportation following.

The city has created a leadership team for the carbon footprint initiative and is working to create a plan, Baker said.

The city also is planning an energy audit, switching to LED lighting, weatherization efforts for older buildings and inspecting energy use.

For the city’s vehicles, the city is exploring options for fueling, whether it is natural gas or electric; technology to track uses and idle time; and exploring software to improve efficiencies.

Baker said the city is looking at ways to be innovative that does not come with a high cost.

Catawba College President Brian Miller, who was in attendance, recommended reaching out to the school’s Center for the Environment for partnership opportunities.

Bailey said there are talks of installing solar panels at the soon-to-be Salisbury Fire Department Station No. 3.