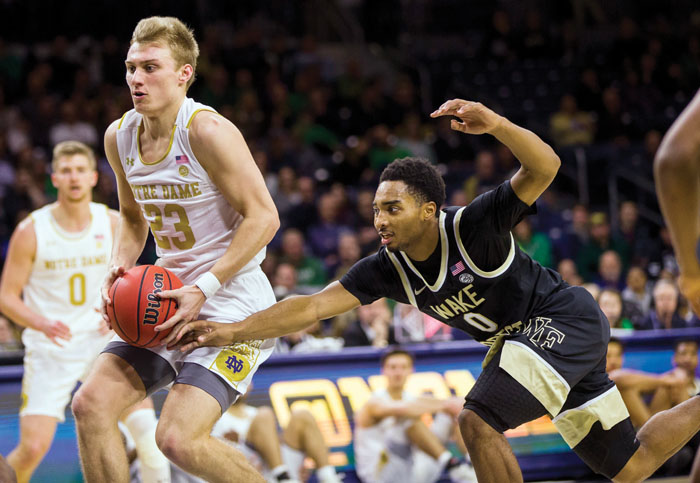 JOHN FINERAN Associated Press
SOUTH BEND, Ind. (AP) — Notre Dame coach Mike Brey got expected production from T.J. Gibbs and John Mooney but was particularly giddy over the performance of 6-foot-10 reserve Nate Laszewski in Wednesday’s 90-80 Atlantic Coast Conference victory over Wake Forest.
“We’ve seen (sophomores) Prentiss (Hubb) and Dane (Goodwin) kind of look like ‘here they come,'” Brey said after Notre Dame ended a two-game ACC losing streak and won its first league game at home. “I thought tonight was that night for Nate the way he hunted his shot and was so active defensively.”
Laszewski had a season-high 18 points on 6-of-8 shooting including 3-of-5 from behind the 3-point line to add to Gibbs’ team-high 23 points and Mooney’s 16th double-double of the season of 19 points and 13 rebounds for the Fighting Irish (12-8, 3-6 ACC).
Goodwin added 14 points as the Irish bench had a 32-23 edge over the Demon Deacons (9-11, 2-8), who got a game-high 24 points from Brandon Childress.
“Everyone on the team tells me when I have a look to step up and take it, to play with confidence and play with swagger,” Laszewski said.
“Shoot that thing, Nate, every single time you touch it,” Gibbs joked after hitting 3-of-7 3-pointers himself, Notre Dame made 10 of 26 from long range (39%) for the game, including 7 of 15 in the second half when the Irish shot 53% (17 of 32) while outscoring the Demon Deacons 54-39 after the break.
Childress, who missed Wake Forest’s overtime loss Sunday to Virginia with a leg injury, scored just eight points in the second half as the Irish clamped down defensively on the Demon Deacons, who lost their third straight game.
“The ballgame today was a tale of two halves,” Wake Forest coach Danny Manning said after 7-0 center Olivier Sarr scored 18 points and Isaiah Mucius added 13. “Offensively we were efficient and did some things (in the first half). Second half, not so much. We knew going in that Notre Dame shoots a lot of 3s and shoots them at a high clip.”
Childress scored 16 points on 6-of-8 shooting in the first half as the Demon Deacons took a 41-36 halftime lead. Wake Forest hit eight of its first 11 shots (73%) before finishing at 53% (16 of 30).
Mooney, who had 12 double-doubles in a row before Florida State held him to five rebounds in an 85-84 ACC loss Saturday, started slowly. He didn’t have a rebound until 9:58 remained in the first half and got his first basket 19 seconds later, but he finished with eight points and six rebounds to lead the Irish, who hit just one of their first seven shots (14%) before finishing at 35% (12 of 34).
Mooney’s three-point play tied the game at 43-43 with 17:17 to go. He had his double-double with his 10th rebound with 16:52 left before Rex Pflueger hit a 3-pointer to give the Irish the lead, 46-45, with 16:32 remaining. Gibbs hit three free throws to stretch the Irish lead to 49-45.
Then with Mooney and fellow big man Juwan Durham resting, the Irish stretched the lead to eight, 54-46, on a drive by Laszewski with 14:27 remaining. A Gibbs floater in the lane made it 60-51 with 11:31 when Manning called a timeout.
Notre Dame forged a 12-point lead, 68-56, with 8:45 remaining on a Mooney basket. But the Demon Deacons closed to within 77-74 with 3:35 forcing Brey to call a timeout. The Irish responded with a 3-pointer by Laszewski and a three-point play by Gibbs to hold off the Demon Deacons.
BIG PICTURE
Wake Forest: The Demon Deacons, who entered the game hitting just 42% from the floor, were hot in the first half but couldn’t maintain their accuracy, hitting just four of their first 10 shots in the second half while Notre Dame took control with a 24-10 run.
Notre Dame: The Fighting Irish entered the game just 2-6 in the ACC with five of the losses coming by five points or less – two by one point, including last Saturday’s 85-84 loss at No. 5 Florida State that had Brey questioning the officiating and earning the school a $20,000 fine from the league.
UP NEXT
Wake Forest: Saturday home vs. Clemson.
Notre Dame: Saturday home vs. Georgia Tech.
___
https://apnews.com/Collegebasketball and https://twitter.com/AP— Top25