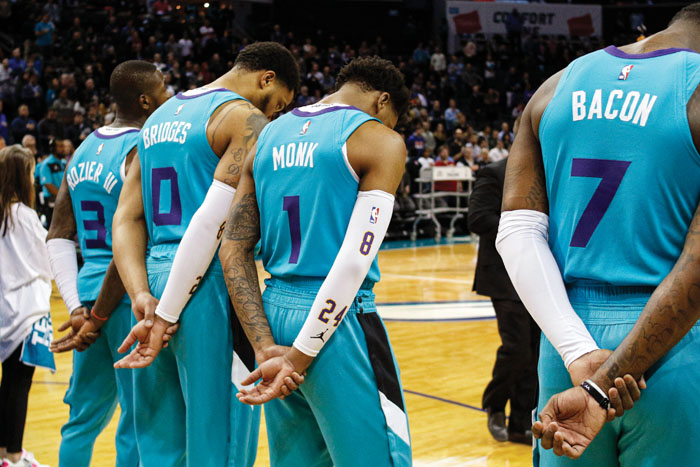 Charlotte Hornets players, left to right: Terry Rozier, Miles Bridges, Malik Monk and Dwayne Bacon wear sleeves with the numbers 8 and 24 during a moment of silence in honor of Kobe Bryant before an NBA basketball game against the New York Knicks in Charlotte, N.C., Tuesday, Jan. 28, 2020. (AP Photo/Nell Redmond)

RICHARD WALKER Associated Press
CHARLOTTE (AP) — Terry Rozier scored 30 points and the Charlotte Hornets rallied from a 13-point deficit to beat the New York Knicks 97-92 on Tuesday night and snap a season-high, eight-game losing streak.
Charlotte (16-31) trailed by 13 points three times in the second quarter before closing within 50-47 at halftime and taking the lead for good late in the third quarter against New York (13-35).
The Hornets hadn’t won since Jan. 4 and their losing streak was the longest for the franchise since the 2014-15 season.
The game started like many others around the NBA since Kobe Bryant’s death in a helicopter crash on Sunday. The Hornets won the opening tap and dribbled out a 24-second shot clock violation and the Knicks responded by dribbling out an 8-second backcourt violation. Bryant wore the Nos. 24 and 8 for the Los Angeles Lakers during his career.
Additionally, all Hornets players wore Jumpman Jordan Brand white sleeves with the numbers 8 and 24 on them.
Miles Bridges added 15 points, Malik Monk 13 and Cody Zeller 10 for Charlotte on a night in which reserve Willy Hernangomez had his first double-double (12 points and 10 rebounds) of the season. Hernangomez hasn’t played in 29 of the Hornets’ first 47 games but has now played in six of the last seven, scoring in double figures in three of them.
New York built its 13-points leads as Julius Randle scored 12 in the first quarter and 18 in the first half.
But Rozier scored nine points in the second quarter to spark a 26-16 over the final eight minutes of the half as Charlotte pulled within three.
In the second half, Charlotte used balanced scoring to take charge at 84-74 with 3:15 to play.
The Hornets still had to survive a late Knicks surge that closed the margin to four points three times in the final 1:10 and eventually got as close as 95-92 with 10.6 seconds left. Rozier hit eight free throws in the final 40 seconds to keep Charlotte comfortably ahead.
Randle had 24 points and Marcus Morris scored 23 for New York.
TIP-INS
Knicks: Interim coach Mike Miller had no further updates on injured rookie R.J. Barrett, who missed his sixth straight game with a sprained right ankle. “Three days ago he was evaluated and we said it was going to be a little bit longer,” Miller said. “We want to make sure he’s progressing well.” Barrett, the third overall pick in the 2019 draft out of Duke, is averaging 14.1 points, 5.2 rebounds and 2.5 assists in 41 games (all starts) this season. The Canadian told reporters before the game that he wanted to retire his nickname of “Maple Mamba” out of respect for Bryant.
Hornets: The Hornets have nine losing streaks in their history of 10 or more games. Charlotte’s longest losing streak is 23 games at the end of the 2011-12 season. The last 10-game losing streak came from Nov. 15 to Dec. 3, 2014.
UP NEXT
Knicks: Host Memphis on Wednesday.
Hornets: Visit Washington on Thursday.