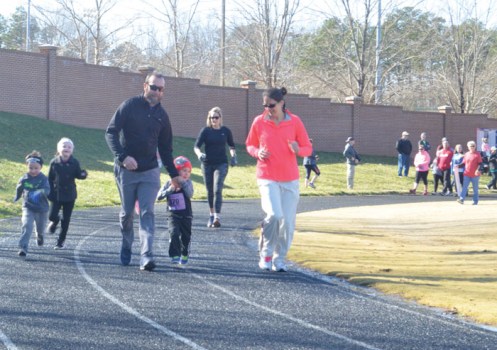 Griffin Rouse, 3, hides behind dad Eric, while mom Jennifer looks on during the Winter Flight Fun Run held Sunday at Catawba College. It was the first time Griffin raced, but Jennifer has competed in other races. The event's proceeds benefits Rowan Helping Ministries. Shavonne Walker/Salisbury Post 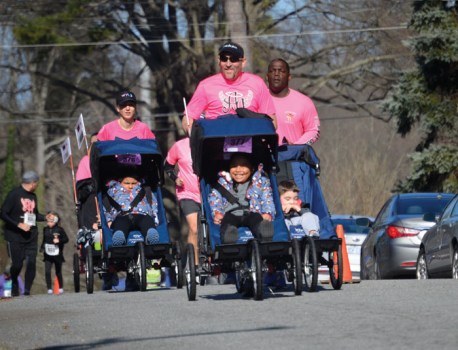 Participants and running buddies with Ainsley's Angels of the Triad compete in the Winter Flight 5K/8K held Sunday at Catawba College. The 8K event is one of the oldest in the state. About eight teams competed in the race. The organization is one that provides equipment and the opportunity for runners with special nees to take part in endurance events. Shavonne Walker/Salisbury Post 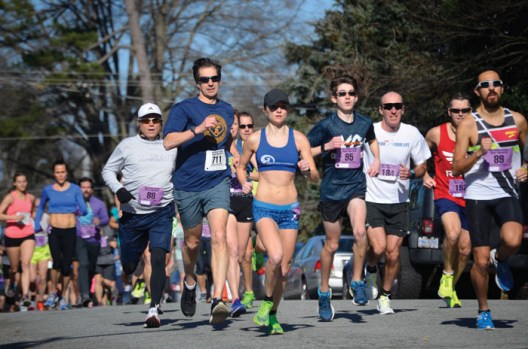 Runners take off in the Winter Flight 5K/8K race held at Catawba College on Sunday. The race proceeds benefit Rowan Helping MInistries. More than 400 people participated in the event. This is the 37th for the event making it the oldest 8K in the state of North Carolina. Shavonne Walker/Salisbury Post 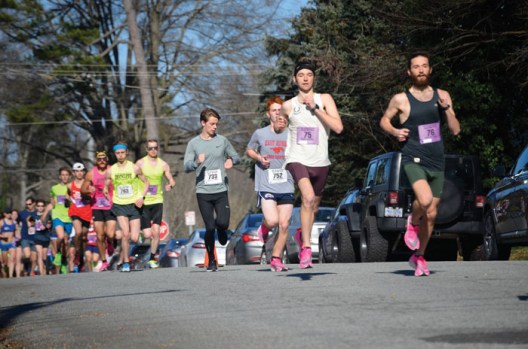 Jonathan Martin, wearing bib No. 75, and his twin borther, Matthew, right, compete in the Winter Flight 5K/8K event held Sunday at Catawba College. The UNC-Pembroke grads are training for a couple of half marathons this spring. The Winter Flight raises money for Rowan Helping Ministries. Shavonne Walker/Salisbury Post

The 71-year-old has competed in races in 49 of the 50 states with plans for a Delaware race in April. Short was one of over 400 participants in Sunday evening’s 37th annual New Sarum Brewing Winter Flight 2020 8K/5K race.

The race, which also included a half-mile fun run, took place at Catawba College’s Shuford Stadium and routes around the school. The 5K Health Run/Walk, the fun run as well as the 8K, which is the oldest in the state, were all open to any age or ability.

This year’s race included for the first time the use of live GPS phone tracking via the RaceJoy app that allowed both runners and spectators to track their progress throughout the course.

Short said she’d competed in this particular race before, but it had been a while. She’s been running seriously for three years and took up running 10 years ago. Her preparation for the races that she competes in starts at the gym, she said.

Rebecca Parker crossed the finish line a bit out of breath but with a strong first-place finish in the 5K. And while Parker has asthma, it doesn’t stop her. It’s two years since she’d ran competitively in college. Parker said overcoming asthma is as simple as listening to her doctor, making sure she has her inhaler and taking controlled breaths. Parker, a native of Mount Ulla, encourages any young person who battles asthma to not let it stop them.

Since her hiatus from running and because her schedule wasn’t conducive to road runs, Parker did all of her training for this race on the treadmill.

Tommy Tucker took 19th place in the Winter Flight 5K, but it wasn’t his first race of the weekend. The Warren County resident had competed in two races the previous day — a morning race at East Lincoln High in Denver and the other at McAlpine Creek in Charlotte for its Winter Classic 8K/4K race.

“I’ve been running for seven years now. I do a lot of running,” Tucker said just before the race. “I have a goal to race in every county in North Carolina.”

Tucker not only participates in races, but he also organizes the Ridgeway, N.C., Cantaloupe 5K/10K. The proceeds of that event benefit the Ridgeway Fire Department and the Ridgeway Historical Society, of which he is a member. He’s competed in 34 timed races so far.

Matthew Martin came in first place in the 8K race while his twin brother, Jonathan, came in right behind him. The two UNC-Pembroke grads train together and race together. They are currently training for a couple of half marathons this spring, the first of which will be in Myrtle Beach, S.C.

Jerry Austin competed in the race with an upright handcycle with a running partner from Ainsley’s Angels, a nationwide organization that works to make endurance events accessible to everyone and build awareness about America’s special needs community.

The Thomasville resident said he thought he did pretty good.

It was his first time competing using a handcycle, but he’s been practicing for over a year at an empty church parking lot. When asked about the toughest parts of the race, Austin immediately noted the hill.

But “I made it through,” he said with a smile.

Terry VanNatta, 75, set a state record on Sunday for his age group with fastest time for an 8K. He began running when he was 30 and to date, he’s run 125,000 miles or the distance it would take to lap five times around the equator.

“Today was a very special goal that was to break the record,” VanNatta said after the race.

VanNatta said he’s competed against some of the most well-known men in running including former Olympian and long-distance runner Joseph Nzau and marathoner Bill Rodgers who won both the Boston and New York City marathons four times.

VanNatta, who lives outside of Boone, said he prepared for the race by doing a lot of short speed walks. He’s grateful to be able to compete because he’s a cancer survivor. He was diagnosed with rare cancer, Burkitt’s Lymphoma, and was given three weeks to live. The 8K record for his age group that VanNatta beat was 39:40 and he came in at 37:50.

Executive Director Kyna Grubb, who was on hand as a volunteer, said the annual race has been a great partnership.

Money raised makes it possible for those who receive services from the organization to have shelter, a meal and other offerings.