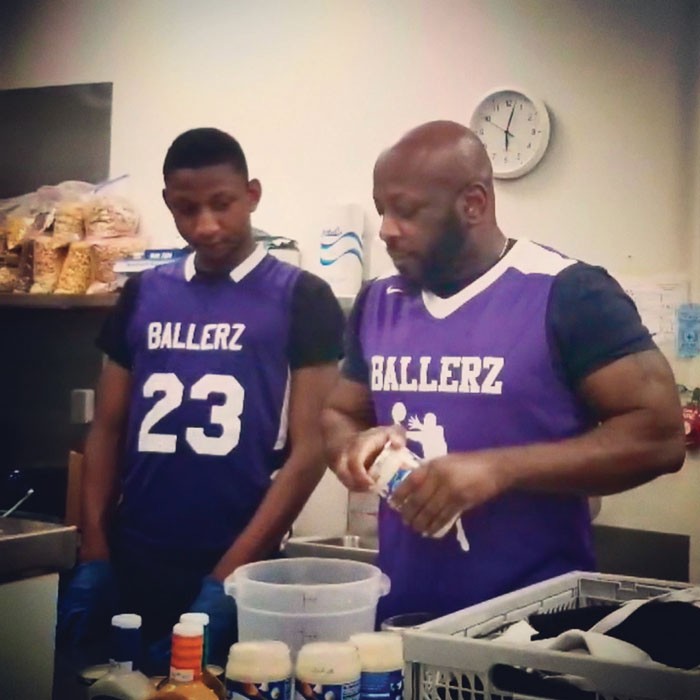 Roommates Syl Tshiona and Leah Henderson have a common mission: they coach an AAU basketball team — The Ballerz — for boys ages 12 to 15. AAU stands for the Amateur Athletic Union, a multi-sport organization dedicated exclusively to the promotion and development of amateur sports and physical fitness programs.

Tshiona says some AAU teams are pretty elite, recruiting and putting kids through trials. They don’t take just anybody, he says. “But mine is come one, come all. We do trials, developmental skills, and we put them in the game and see how they do. It’s good for building them up.”

He does have requirements, though, in other areas. Players must maintain a “B” average — or, if they don’t have it, they have to actively work to raise their grades. Syl and Leah help get their players tested for grade level, then help tutor them to improve their grades. Syl says, “I’m not going to tell these kids to bring their grades up; I’m going to set up a plan with the kid and the outcome will be predictable. If we don’t reach the goal, it’s easy to see where we missed it.”

Because he works with a number of kids from low-income homes, Tshiona says many of the parents don’t understand what it takes to graduate high school and get into college. His players often don’t understand what GPA is, or the ACT or SAT. He works with them, helping them — and the parents — come to understand. He keeps info on what grade point averages are required by various colleges, so the players can understand it’s harder to get into one college than another. 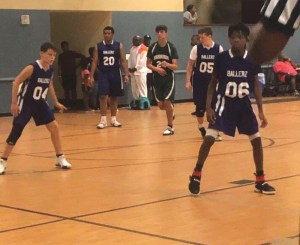 Coach Syl understands what the players need. They may get mad, they leave, then they realize they don’t have the support anymore, and come back.

He’s been tempted to quit many times. “I had a parent say, ‘I appreciate you,’ but he won’t show up to discuss a plan for his child. I’ve given you my schedule, let’s look at his grades and see what he’s doing. But they give me random excuses why they can’t meet.”

Leah encourages him, he says; tells him to go to the Y and get re-energized. That helps. “The kids are the easy part,” he says. “But the parents are the challenge. You see kids not trying in school, then you meet the parents and you get it. There’s no boundaries, no drive.”

To say Tshiona has had challenges in life is an understatement. Born in Zaire, his father was a military attaché when President Mobutu was in office. Accused of conspiring against Mobutu, the elder Tshiona sent all his family to the U.S. — except for Syl and his father, who emigrated to Paris where they lived for a while. His father thought the threat would pass. When he was arrested, he sent Syl to the U.S. to join his mother and siblings.

“We were under the impression he died in prison,” Tshiona says. “But my father had another family in Africa. The idea of my father having another family, being out of prison, not reaching out to me — I wasn’t a very happy man.”

Tshiona’s mother remarried and the new family continued living in the U.S. “My mom didn’t care,” he says. “I always wanted her to care. She’d say, ‘You better bring those grades up!’ — then it was over. Punish me for a short time. Despite what I said, I wanted that attention, wanted that structure. As I got older, the light bulb went off. Today I know what the players need, despite what comes out of their mouth, I’m there. They may get mad, they leave, then they realize they don’t have the support anymore, and come back.”

“I distinctly remember my mother’s husband sitting at breakfast, telling my mom I wouldn’t amount to anything. She didn’t say anything in my defense. That’s driven me ever since.”

Tshiona lost a son to Krabbe Disease when he was only four years old. Krabbe is a genetic illness, and most children who have it die by age two. Today, his daughter has it and his remaining son has the marker. “Briana, my daughter, is 24. She knows where her limitations are, but she doesn’t let them stop her. She hopes to attend Winston-Salem State in the fall. She will study with no break, and we have to tell her to stop.”

His son, Sylvain Claude Tshiona III, or Syl, like his dad, plays on the team as well.

Tshiona works today as an intensive-care nurse at Novant Forsyth in Winston-Salem. He works full-time and spends about 40 hours a week with the basketball team. He’s 53 years old. “At practice, they call me, ‘Coach,’ but outside the courts they call me, ‘Old Man.’” He laughs and rubs his head.

Tshiona credits some of his success to his eighth-grade social studies teacher. Syl had just been playing basketball before class, and the teacher asked him to go to the boys’ room and wash his face. Syl did. “Then the teacher said, ‘You have a lot of potential. I’ve seen you take tests and do really well after a week of keeping your head on the desk.’ It really hit me. I took my comic book out of the social studies book.

Henderson says even when the boys are at the house watching TV, they are leaning against Tshiona on the couch. On weekends when there’s no game, they want to come over. She serves as team administrator, or coach’s assistant. She played a little basketball in high school, but she was quite happy on the bench. Today, Tshiona is pushing her into coaching. When he runs late for practice, she has the boys on the court running drills.

“The parents call me, ‘Drill Sergeant,’” she laughs. “When the boys are at our house, they do chores.”

“She’s the key that drives the engine,” Tshiona says. “She keeps me on schedule. When I was frustrated, she was the voice on my shoulder. I defer to her. I delegate to her. The boys really look up to her.”

He laughs as he says he’s a driver on the court, but he’s laid back at home. Henderson, he says, keeps order at home.

The team served dinner at Rowan Helping Ministries for MLK Day. “The kids have to find out two things about the people who are staying there,” Tshiona says. “To do that, they have to engage with them. Maybe you’ll find out you learned something and they can embrace the idea that one bad choice can impact your life.”

Henderson adds, “One little event can catapult someone into homelessness.”

One kid was bullied in school and didn’t know much about basketball. He found out about the team, and now he plays for the Ballerz. Tshiona and Henderson taught the other boys, “This is your brother now. Your teammate. Here we are family. This is how we treat one another.”

“Now he’s one of the cool kids,” Henderson smiles.

“When the parents realize it’s AAU,” Henderson says, “They worry about the money. But we fund the team. We fund the tutoring. They stay at our house. They stay the weekend before the tournament.”

“I plan on doing it until my wheels come off,” Tshiona says. “It’s the only way we can help the community.”

Why do they spend so much time on other people’s children?

“I was in therapy for a while,” Tshiona says. “I diagnosed myself as having a hole. This is therapeutic. It fills that hole. My work in healthcare if fulfilling, too — but if I can spend 100 hours and get one kid into college — he’s there and putting in the work, you know, that would be so enough to say it was all worth it.”

Henderson agrees. “It’s one thing to care for adults, but to mold children to be good citizens, that’s rewarding.”