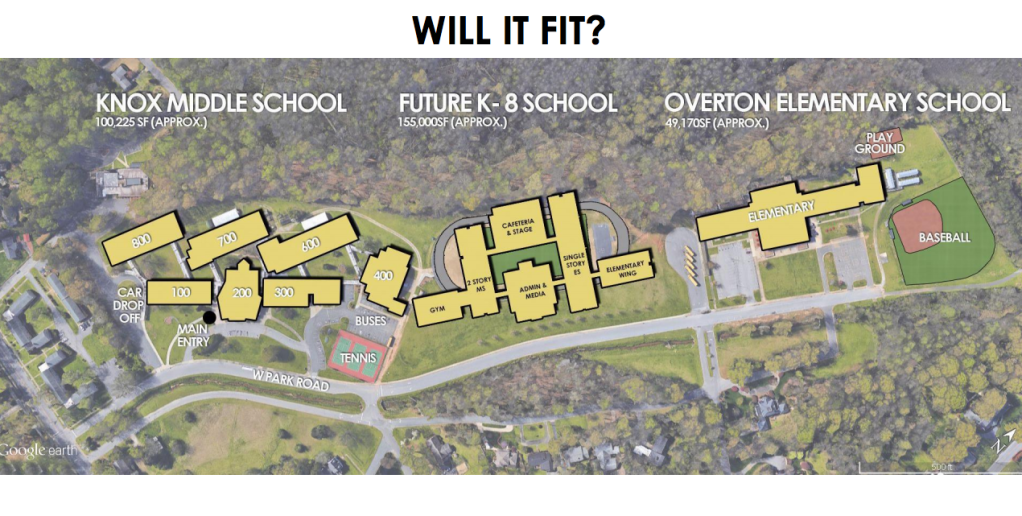 A 2020 overlay showing how a K-8 between Knox and Overton could sit between the two facilities, which would later be demolished.

SALISBURY — Rowan-Salisbury Schools Board of Education will consider the future of Knox Middle and Overton Elementary schools on Monday night.

The issue is only listed on the board’s meeting agenda as a discussion item, as opposed to an action item.

The administration has prepared reports on what a kindergarten through eighth-grade facility built between the two schools would look like if the two schools are consolidated. The plans show possible floor plans and how a combined facility would be feasible in the area between the schools. They were created by Charlotte architecture firm LS3P, which RSS worked with to plan extensive renovations to Knox.

Those possible renovations to Knox have fallen by the wayside with the K-8 option gaining support over a previous scenario that would have resulted in the closure of Overton.

In the K-8 scenario, the new facility would be built in the track and field area between the two schools. After it is complete, the old facilities would be demolished before new athletic fields could be developed and parking areas added.

The school would serve about 1,000 students, with the possibility to add a wing that would expand the capacity to 1,200. Communal parts of the school design include a hybrid cafeteria and performance area, media center and gym.

Any expansion is not likely in the near future. The district’s student population has been declining, and Assistant Superintendent of Operations Anthony Vann said the population of the district is anticipated to be either flat or down through 2029, with no predictions further out.

This is part of a larger issue for the district since state and federal funding has been dropping as the student population declines.

The situation is not unique across the state, as other districts find less funding to maintain the same facilities that are serving fewer students.

RSS now has a surplus of facilities for the students it serves, and part of Vann’s materials for Monday night look at other facilities that could be consolidated. The board asked for that additional information at its last meeting on Jan. 13. The presentation makes no recommendations for Henderson Independent High School and Enochville Elementary School.

The slide on Enochville recommends allowing “administration to move forward with the formal study and closure process.”

Vann cited small student populations at the reason for looking at schools for consolidation, such as Enochville that now serves fewer than 300 students.