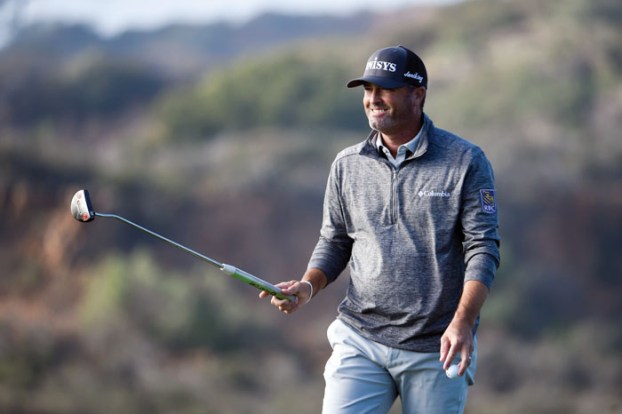 Ryan Palmer raises his putter after hitting a birdie putt on the 17th hole of the North Course at Torrey Pines Golf Course during the second round of the Farmers Insurance golf tournament Friday, Jan. 24, 2020, in San Diego. (AP Photo/Denis Poroy) 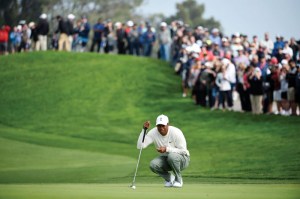 Tiger Woods lines up a putt on the second hole of the South Course at Torrey Pines Golf Course during the second round of the Farmers Insurance golf tournament Friday Jan. 24, 2020, in San Diego. (AP Photo/Denis Poroy)

By DOUG FERGUSON AP Golf Writer
SAN DIEGO (AP) — Ryan Palmer wasn’t aware of any score but his own Friday at Torrey Pines, and he knew it was good enough to at least get himself back into the mix at the Farmers Insurance Open.
He was on the North Course without much bustle — Tiger Woods was on the South — and without any scoreboards. As he kept piling up birdies, Palmer was tempted to get out his phone and see where he stood.
“I said, ‘Just don’t look. We’ll see when we get done.’ I knew it would be close,” he said.
It was much better than that. His 10-under 62 — with a bogey on the last hole — went a long way, taking him to a two-shot lead over Brandt Snedeker going into the weekend.
It was a magnificent round to match the weather along the Pacific bluffs.
But it wasn’t pretty for everyone.
Woods opened his round with four putts from 25 feet for a double bogey, and then a spurt of birdies around the turn to get some momentum, only to stall the rest of the way for a 71 that left him six shots behind.
At least he’s still playing.
Phil Mickelson was wild again off the tee and shot 73 on the North to miss the cut by two shots. He also missed the cut in the desert last week. The other other time Mickelson missed the cut in consecutive PGA Tour events to start the year was in 1988. He was 17, and those were the only two tour events he played.
Joining him with a weekend off were defending champion Justin Rose, Xander Schauffele, Rickie Fowler and U.S. Open champion Gary Woodland.
Palmer was worried about the cut when he was 3 over through eight holes on the South in the first round. He rallied to shoot 72 and carried that momentum into Friday.
“I knew today when I got out here, the low rounds were out here,” Palmer said. “A good 5-, 6- under par round was to be had. I just took what I had and it turned into a 62. So driving the ball great and I was able to finally get some putts to go in. And the golf course with the par 5s reachable and No. 11 as well, it’s a golf course you can take if you’re hitting it well. ”
Palmer, who lost in a playoff at Torrey Pines two years ago, was at 10-under 134.
Snedeker, who won the wind-blown edition of this event in 2016, renewed his love affair for poa annua greens and shot 67 on the South to get into the final group, along with J.B. Holmes, whose 69 left him three shots behind.
Woods has won eight times as a pro at Torrey (including the U.S. Open) and twice at Pebble Beach (including the U.S. Open) and twice at La Costa in the Match Play (no U.S. Opens there). He knows poa. And this time he says it wasn’t his friend, at least at the start.
His 25-foot birdie putt up the hill was wide left, leaving him 30 inches. Woods missed the hole on that one, and it ran down the slope about 5 1/2 feet away. And then he missed the next one.
“It’s just poa,” he said. “I tried to ram it in the hole and it bounced, and hit obviously a terrible third putt, pulled it. The second putt, it’s just what happens on poa. I tried to take the break out and it just bounced.”
The bounced it on four birdies in a five-hole stretch through the 10th hole, but he didn’t make another birdie until the 18th for his 71 that put him in the group at 4-under 140.
Jordan Spieth (70), Jason Day (67) and Rory McIlroy (73) also were at 140.
Snedeker fell in love with Torrey when he tied the North Course record with a 61 as a rookie in 2007, shared the 54-hole lead and finished third behind Woods.
“Puts a smile on my face. I love being here. I love the challenge that Torrey Pines brings. I love the greens,” Snedeker said. “When I come here, I’m always in a good mood, which when you get on poa annua is probably half the battle.”
He’s been around long enough to know the next two days, anything can happen. Sixteen players were separated by five shots for the final two rounds on the South.
Not to be overlooked was Woods, going for his record 83rd victory on the PGA Tour. Woods was nine shots behind after 36 holes when he shot 62-65 to win in 1999, before the South was beefed up for the U.S. Open.
“Somebody’s going to get hot over the weekend,” Snedeker said.
For one day on the North, that was Palmer.

From staff reports SALISBURY — The defense of the Salisbury girls was stifling again on Friday. Ranked No.1 in 2A... read more