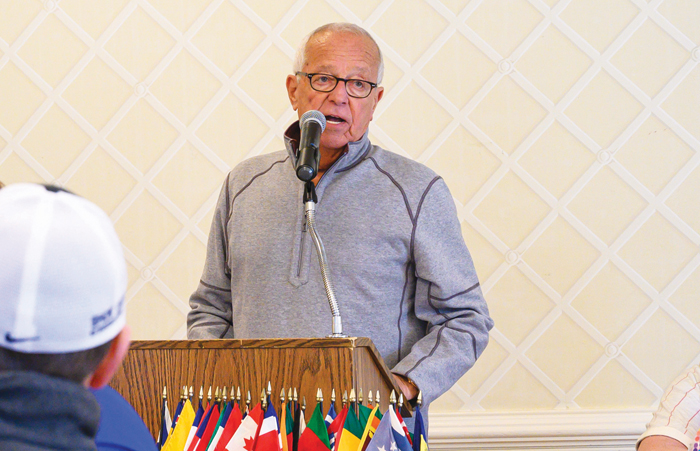 Josh Bergeron/Salisbury Post ... Marty Brennaman speaks to the Kiwanis Club at the Country Club of Salisbury on Friday afternoon. Brennaman, who once worked in Salisbury, retired last year after 46 years as play-by-play announcer for the Cincinnati Reds.

SALISBURY — For the past 46 years, play-by-play announcer Marty Brennaman broadcast over 7,500 games for the Cincinnati Reds. Obviously, Brennaman is passionate about baseball.

And despite living in Salisbury for only five years (1965-70), Brennaman is also passionate about his time here.

“I truly have a special place in my heart for this town and always will,” Brennaman told the Kiwanis Club on Friday at the Country Club of Salisbury. “Living here was special for me. The five years were as good a five-year period as I’ve ever lived and then, going to a place like Cincinnati, of all of the places I could have gone in major league baseball, a ‘little,’ big town where everybody knows everybody. It’s a great place to live and raise children.

“I’ve been fortunate to live in two great places and what I’ve said about Cincinnati, I can say about Salisbury,” continued Brennaman. “Often times, people who live somewhere else and then move into a community like this, have a better feel for how truly special it is — as opposed to people who were born in a town and never leave.”

Brennaman said that his wife, Amanda, who he married in 2012, has only visited Salisbury a few times. But she has fallen in love with the city.

“Amanda has been here four or five times and she would move here today,” added Brennaman. “She thinks this is such a cool town and again, this is someone who had never been exposed to Salisbury until I brought her here a few years ago. So, it’s always a pleasure for me to come back here. The number of faces that I recognize dwindles by each passing year, but that’s OK.”

A native Virginian, Brennaman arrived in Salisbury for the first time in 1965, after graduating from UNC-Chapel Hill, with a degree in communications. He worked at WSTP, broadcasting high school and Catawba College games, in addition to American Legion baseball.

It’s a Legion game that Brennaman called in the summer of 1969 that most older Salisbury residents remember. Randy Benson hit a walk-off home run at Newman Park, winning the state championship series over Wilmington and sending the locals to the regionals. Legend has it that Brennaman was nearly climbing the chicken-wire behind home plate as Benson’s blast cleared the left field fence.

“Whatever success I had, this town prepared me for that, allowing me to improve my skills at my own level,” recalled Brennaman. “I got to do high school and college football and American Legion baseball. I worked under some great coaches — Harvey Stratton in football and Sam Moir in basketball at Catawba, and, of course, Joe Ferebee in (Legion) baseball.”

Brennaman said that the experience under those men “really introduced me to the technical side of the game. I was smart enough to shut up and listen when they started talking about the technical aspects of the game, because they sure knew more about it than I did. I built a tremendous foundation by working with those people.”

Brennaman took that foundation to Virginia in 1971. He did play-by-play for the American Basketball Association’s Virginia Squires and the triple-A baseball games of the Tidewater Tides.

By 1973, Brennaman was recognized as the state’s top sportscaster and Virginia Tech hired him to do both football and basketball.

Meanwhile, Al Michaels, the Cincinnati Reds’ play-by-play man, left for an ABC network TV job. Brennaman was selected to replace Michaels as the voice of the Reds for the 1974 season. He was there for the next 46 years, retiring just last September.

Brennaman received the Ford Frick Award in 2000, presented by the Baseball Hall of Fame to a broadcaster for major contributions to the game of baseball.

The National Sportscasters and Sportswriters Association (NSSA, now NSMA), which used to be headquartered in Salisbury, named Brennaman the Ohio Sportscaster of the Year 12 times and in Virginia, four times.

On April 26 of this year, Brennaman will be inducted into the Cincinnati Reds Hall of Fame and Museum.

During the 2019 season, Brennaman was honored in each of the major league ballparks, during his last stop at those locations. He joked that he was even recognized by the Chicago Cubs and St. Louis Cardinals, two fan bases “that over the years, hated me.”

Brennaman expresses gratitude to have called Cincinnati games for 46 years. “I’m in a transient business where guys are constantly coming and going for more money or a bigger market,” he said.

Broadcasting was actually not Brennaman’s first choice of careers. He wanted to be an actor.

“I did a lot of theater work in high school and college and I wanted to go to New York and break into the business,” explained Brennaman. “But my mom and dad put me in touch with a couple of guys working off-broadway who were starving to death and I realized, no pun intended, that I didn’t have the stomach for it.

“This was the second choice, so to speak,” he continued. “And once I determined that I wanted to get into broadcasting, I made the determination that I wanted to be a sports play-by-play guy. I didn’t decide from the outset that it had to be baseball, but it was just something that happened.”

Brennaman seemed to get emotional when speaking about Nat Allbright, an early broadcaster in northern Virginia who re-created Brooklyn Dodgers games while sitting in a studio. He had “crowd noise” sound effects him and did play-by-play off of a ticker-tape, which fed him the information about the game.

“I wasn’t a Dodgers fan but I happened to pick him (Allbright) up on the radio one night in 1954 and I was so taken by his play-by-play ability, I think the seed was planted then,” remembers Brennaman, who would have been 12 years old at the time.

“When I was elected to the Hall of Fame in 2000, I found out that Nat Allbright was still alive,” continued Brennaman. “He was 87 at the time and I called him. He recognized my name because he was still a big baseball fan and I had been around for a while. I told him, ‘if I had gone to my grave without letting you know how important you were to me as a kid … I give you credit for that.’ Nat broke down and cried. About five months later, he passed away. I felt like I was fulfilled, because I let him know how important he was to me.”

Brennaman has returned frequently to Salisbury, for NSSA and Catawba events, and to visit with local friends, including Bob Setzer, Bill Hall and Tommy Eaton.

For the Kiwanis on Friday, Brennaman also touched on a current topic — the recently uncovered cheating scandal involving the Houston Astros and Boston Red Sox.

“What the Astros did was unconscionable,” said Brennaman, who also has a “real problem” with recently-fired Boston manager Alex Cora. “Cora, who was the architect of the situation as bench coach in Houston, then left to manage Boston and did the same thing there.”

Former Reds player and manager Pete Rose, who was banned from baseball for betting on his team in the 1980s, is not in the baseball Hall of Fame, even though he has more hits than anyone else in the history of the game. Obviously, Brennaman has a special place in his heart for Rose.

Brennaman said that if Cora and the Houston manager and general manager are allowed back in baseball after their one-year suspensions, then MLB “should resurrect the entire Pete Rose situation and allow him to go onto the ballot for the baseball Hall of Fame.

“I believe this cheating thing is working in Pete’s favor,” continued Brennaman. “But I fear that if Pete ever does make it into the Hall, and I think one day he will, it may be after he’s gone. And I think that would be shameful for baseball. You can hardly turn around in Cooperstown without seeing some mention of something that Pete Rose accomplished as a player. They have those in there because it extols the virtues of what a great game baseball is. So they use him to their advantage but still, they won’t allow him a plaque in the Hall of Fame … and I have a major problem with that.”

On Friday, he mentioned Catawba’s proposed renovation of Newman Park, the school’s baseball facility, which was built in the early 1930s and is one of the top three oldest parks, still in use, in North Carolina.

“It’s one of the most iconic baseball facilities I’ve ever been in but that ballpark is badly in need of renovation,” said Brennaman. “I think that movement will be getting underway soon and I fully endorse it. I plan to help them in any way I can. The college’s program, under coach Jim Gantt, has been sensational.”

Finally, while Tommy Thrall replaces Brennaman in the Reds’ broadcast booth in 2020, the old announcer will still be in Arizona for spring training.

“I’m not going to miss spring training!” he concluded. “That’s the best part of the job! If they had ever taken spring training away from me, I would’ve quit. I signed an appearance deal with the club, as they feel like my presence can help them in certain areas, so Amanda and I will be out there for three weeks. It’s the best time of the year — there’s nothing like spring training.”