West Innes Street home destroyed by fire, but homeowner gets out safely with puppy 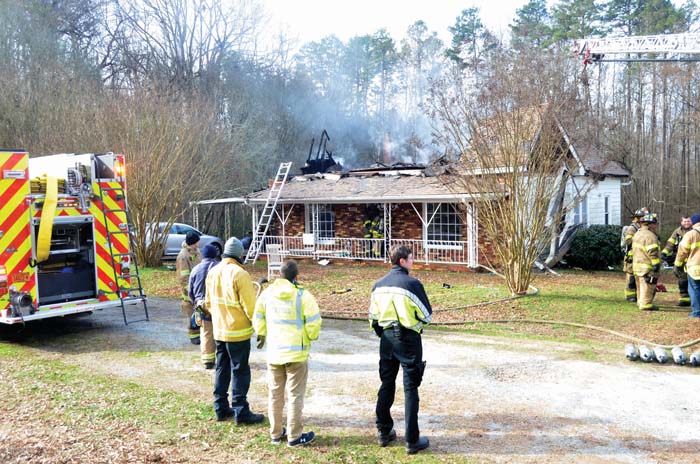 Firefighters continue to douse water onto flames onto this house Thursday morning. A passerby spotted flames coming from the home around 7 a.m. One of the owners was home, located at 3367 West Innes St., but managed to get out with her puppy. The home was destroyed. Shavonne Walker/Salisbury Post

SALISBURY — A Salisbury home was destroyed early Thursday morning following a chimney fire, displacing the couple who’d only lived there a few months, according to the Rowan County Fire Marshal’s Office.

A passerby spotted flames at the home, located at 3367 West Innes St., not far from North Hills Christian School, around 7 a.m. and called 911. The homeowner, who was home, managed to get herself and a puppy out without injuries.

Multiple firefighters tackled the fire from inside until they realized the home had a drop ceiling that prevented them from gaining quick access to the attic space, said Salisbury Fire Battalion Chief Shawn McBride.

Part of the roof collapsed, McBride said. Firefighters then moved into a defensive mode, he said, and attacked the fire from outside the home. Once it was deemed safe and some of the fire was extinguished, they returned inside to continue to poke through parts of the ceiling to gain access to the rest of the fire.

Once fire crews arrived, there was already fire coming from the roof on the back part of the home, he said. Hours after the fire, crews continued to shuttle water from the nearest hydrant at North Hills Christian School. Firefighters remained at the home to douse the roof area with more water as small flames flared near the attic area.

Fire Division Chief Deborah Horne said the homeowner had lit a fire in a wood stove and the fire started in the chimney wall. Horne said the family had moved into the home recently and were not aware of when the chimney had been last cleaned. The couple had insurance, Horne said.

The following agencies responded to the fire scene: Franklin, Locke, Spencer, Cooleemee, Jerusalem, Woodleaf, Ellis Cross Country fire departments as well as Rowan County Rescue Squad and Rowan EMS. No one was taken to the hospital, but an ambulance responded as a precaution. The local chapter of the American Red Cross assisted the families.