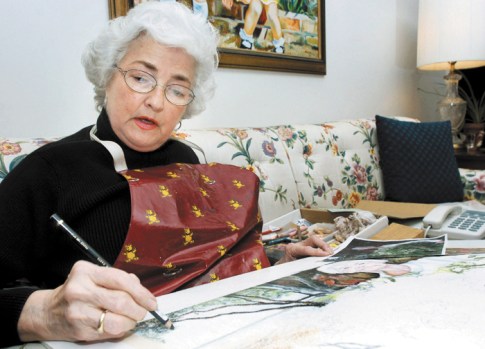 Janie Allen works on a portrait from a photograph for the "Faces of Abundant Living"-Photo by Joey Benton, Salisbury Post 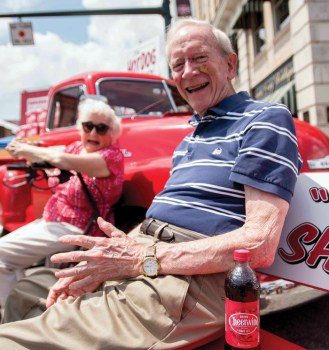 JON C. LAKEY / SALISBURY POST Janie and Sonny Allen sit on a bench on with a bottle of Cheerwine during the 2018 Cheerwine Festival. 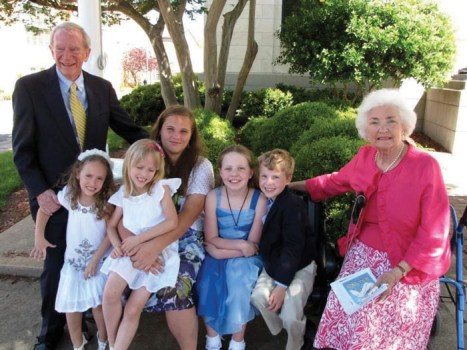 SALISBURY — Because everyone uses the words, “beautiful,” and “sweet,” to describe Janie Allen, one might assume she was a vapid Southern lady.

Nothing could be further from the truth. When she saw an opportunity for improvement, she went after it full force. Her trail of influence spreads across the city of Salisbury. Janie was born in 1932 and died this Tuesday. Despite years of declining health, she refused to complain.

She graduated from Burlington High School and Catawba College. Janie met her husband, Sonny, at Catawba; they courted and married soon after college.

The couple lived in a spacious home on McCoy Drive in Milford Hills for years. They had three children: Laura, Lee and Chip. Sonny served as mayor of Salisbury from 1971-73, and Janie often served as a gracious hostess.

Co-conspirator Kaye Hirst worked with Janie, Ave Cadwallader, Lou Clement and others in 1977 to create what is now the mural on Fisher Street. It took three years.

Artist Cynvia Arthur drew a sketch of the proposed mural, then enlarged it to a board 10 feet long by 4 feet high. Using a borrowed truck with a lift, Janie, Hirst and others used a chalk line to snap a grid to the wall of the building in 12-inch increments. Arthur would quickly paint a line on the chalk to make it rain-proof. The grid alone took three days.

Arthur completed the images of buildings and streets first and added the people at the end. She photographed them all at mid-afternoon so the shadows were consistent.

The ribbon-cutting for the mural was November 30, 1980. By all appearances, the city was ecstatic: an article from the Salisbury Post says about 500 people attended. The N.C. secretary of cultural affairs attended.

Janie, serving as president of the Rowan Arts Guild at the time, spoke at the event.

“There were times I felt like the pope,” she said, “looking at the ceiling of the Sistine Chapel and saying, “When is it going to be done, Michaelangelo?’”

Over the years, weather took its toll on the mural, and Cindy had to be called back to Salisbury to repaint sections. Meanwhile, others who were involved moved away or passed on. Eventually it was just Hirst and Janie.

Undaunted, they submitted for 501(c)(3) status. Janie wrote all the paperwork out in longhand, then typed it on her kitchen table. They were granted non-profit status.

Over the decades, Janie would call Hirst and suggest a person who might be willing to donate to the mural’s upkeep. They’d visit people together to ask for money.

“Then we’d figure out we had money to bring Cindy back for nine days,” Hirst says, “or six, or four … We really struggled at times to get the money to get that paint on the wall. She pursued support of that mural with a calm vengeance. She was the sweetest, prettiest, southern lady I’ve ever known.”

Although there is a copyright seal on the corner of the mural, many enterprising folks have sought to capitalize on it, printing its likeness on tote bags, T-shirts, mugs and more. Only the Stitchin’ Post officially has permission to duplicate its likeness.

“When someone would try to sell things with the mural’s image on it,” Hirst said, “Janie and I would go pay them a visit. We’d tell them they had to give the mural foundation a cut of their proceeds. Nine times out of 10, they’d just shut production down. We got the job done.”

In the early 2000’s, the City of Salisbury displayed Christmas angels painted on plywood throughout downtown. Each angel was created by a local artist commissioned by private citizens. Janie painted at least three.

A 2002 article in the Post called Janie “the mastermind behind the Angels in Salisbury Project.” The angels were used at Christmas throughout downtown until weather rendered them unusable.

Janie served as chair of the Community Appearance Commission in the late 1980s. She chaired a task force of 15 people for Mayor John Wear to look into the new technology of recycling.

“I can say that Janie was a tireless worker to improve the overall visual environment of Salisbury’s downtown and its neighborhoods, and much of the good work that she did will live long after her,” Dunn said. “She was a special lady. An extremely likable lady and a person I greatly admired. Salisbury is graced because we had her in our presence. May light perpetual shine upon her.”

As president of the Rowan Arts Guild in 1979-80, Janie had the vision to evolve Waterworks from an art gallery to an active arts center. She was key in transforming the former city jail, now the location for Salisbury-Rowan Utilities, into the arts center. They planned a ceramics studio in the basement, a major step at the time. She, of course, was a key player in the creation of the mural. And she was a gifted artist in her own right, preferring the medium of watercolor.

The Allens, Janie and and Sonny, have been active members of St. John’s for 42 years. She served in the choir for 30 years and was involved in Lutheran Church Women, Church Council, served as lay assisting minister and many committees, according to her son, Chip.

Fellow member Rosemary Kinard remembers Janie’s solo on the recording marking the 250th anniversary of the church. The song was, “Draw Us in the Spirit’s Tether,” by Harold Friedell.

“Oddly enough,” Kinard says, “We played that anthem, with her verse, this past Sunday – shortly before she passed away. It was moving to me because I always think of her when I hear that song. It was a beautiful tribute to a beautiful spirit.”

Rob Durocher serves as minister of worship and the arts at St. John’s. Janie served on the search committee that made the call for him to come to St. John’s.

“I met her with the search committee in 1997,” Durocher says. “There was something about her and her incredible smile that lifted up that interview. She was so sweet and so welcoming. When you go into an interview feeling a little intimidated, that’s all it takes. This church is such a leader in the synod, and it was a big deal to think about having the opportunity to come here.

“Her smile and welcoming way made me think, this is a welcoming church. Her smile was sunshine personified. She was always so encouraging once I got here.”

“She influenced so many people in this community, not only with her art, but with her deep concern and very encouraging nature. I am one of her biggest fans,” he said.

Frank and Diane Goodnight were next door neighbors for years on McCoy Drive. When Janie and Sonny moved out, the Goodnights bought their home. Years later, both couples lived in the Plaza apartments downtown and were once again neighbors.

Diane Goodnight has many fond memories of those years together. She recalls that the families had cookouts together, went to the beach together and wore a path in the ground between their two homes. When the Goodnights started their business, Diversified Graphics, Diane said it seemed they worked day and night. Their daughter Ellen Goodnight Isaacs would call whenever Janie prepared macaroni and cheese, asking if she could eat at the Allens’ home.

“The word, ‘kindness,’ comes to mind,” Diane Goodnight says. “She was just so kind. And she was so much fun! We were together so much. Cooking out, sitting around the dining table, we had the best times. She loved to host. She was a good Christian woman. Yes, kindness. Our kids are still fast and true friends. They just love each other.”

Sonny doesn’t have too many words at this point.

Speaking with his customary chuckle, he recalls her love of music, singing, going to church and being involved.

“She just had wonderful qualities,” he says. “She had good parents and she had all their good qualities. She just looked for the best in everyone.”

Did she make him a better man? “Well, That’s a job she never finished,” Sonny said.

“She was a wonderful mom. She made everyone — friends, neighbors, co-workers foreign exchange students — feel welcome and wanted in our home,”  she said. “She never met a stranger. We knew we were loved.”