GRANITE QUARRY — Friends, family and members of the firefighting community were still in a state of shock one day after Tyler Hamilton, a firefighter, was shot and killed outside of a North Main Street duplex in what police say was a murder-suicide. 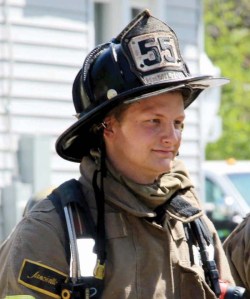 Granite Quarry-Faith Police said on Wednesday morning 26-year-old Andrew Myers, ambushed Hamilton, 30, outside the home of his estranged wife, Alaina Myers. Andrew Myers, who had been waiting in a truck, stepped from the truck and shot Hamilton, according to police and an incident report. The firefighter was struck once in the head. Afterward, Andrew Myers went inside the duplex at 412 North Main St. to confront his estranged wife. He then turned the gun on himself, said Police Chief Mark Cook.

Several people called 911 and an officer arrived quickly to the scene, but both men were already deceased from injuries Cook said. Cook called it a domestic situation that took a turn for the worse. Investigators remained on the scene for hours as news spread to Hamilton’s family and amongst the firefighting community and friends.

Friend Anna Lingle, who has known Hamilton since they were both children, said she’s heartbroken. The two grew up together and their families are friends.

“He was the kind of person who would reach out no matter what’s going on with him to make sure others would have a smile on their face. He was sweet and kind and his personality was out of this world,” Lingle said.

Lingle said Hamilton had a lot of friends and never met a stranger.

Lingle said she strongly believes Hamilton and Alaina Myers were friends and not in a relationship.

“He was beautiful inside and out,” Cassel said.

Firefighter Chasity Young has known Hamilton for about 13 years and said he was a great firefighter and a great friend.

“If I could say one thing about him, it would be how genuinely nice he was. He just had a happy soul,” Young said. “He never failed to make you laugh; he was so goofy and he was always just so happy.”

She said Hamilton was always willing to help anyone at the drop of a dime.

“We had a lot of fun times and I’ll cherish those memories. I will surely miss him,” Young said.

Kara Thurston, whose mother taught Hamilton in the second grade, said she and Hamilton served together on the Franklin Township Volunteer Fire Department.

“He was a great friend. We both worked night shift. So he and I would chat late into the night to help keep each other awake,” Thurston said. “He always had the funniest jokes and the best sense of humor. He was kind and considerate, but most of all he was genuine.”

She’s known the Hamiltons for years.

“He will truly be missed,” Thurston said.

Hamilton began with the fire service as a junior firefighter and worked alongside his father Rick, who is a Franklin Fire Department captain, and brother Trevor, who is also a firefighter.

“With the tragic events that unfolded yesterday in Granite Quarry, our emergency services family across Rowan County is deeply saddened. Our prayers today are with the families and friends of all those affected,” said Rowan Fire Division Chief Deborah Horne.