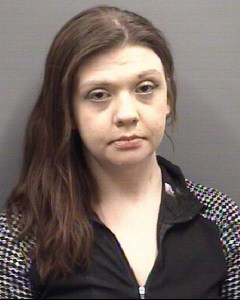 SALISBURY — A Buncombe County woman faces misdemeanor child abuse charges after she was discovered unconscious in a stolen car with her toddler in the backseat. The woman admitted to drinking alcohol before passing out, according to the Rowan County Sheriff’s Office.

She was found around 8 p.m. on Sunday in a 2014 Chevrolet Captiva parked at Mikey’s One Stop, located at 3005 N.C. 152 East. Sheriff’s Capt. John Sifford said 911 Communications determined the vehicle was reported stolen by a Juanita McHone.

When the deputy approached the vehicle the woman inside was unconscious. He could smell a strong odor of alcohol. The deputy also saw a young girl in a child safety seat in the back. The woman came to and asked the deputy what was going on, Sifford said.

She told the deputy the vehicle belonged to her grandma and she was allowed to use it to run to the store. She said she drove to that store to meet her boyfriend who lives in Charlotte. According to a report, the woman said she bought two Four Loko drinks and finished both while waiting on her boyfriend.

According to its own website, the alcohol content of Four Loko varies by state, but is typically available in 8%, 10%, 12% or 14% alcohol by volume.

Sifford said the woman kept getting off track and laughing while talking to the officer. She eventually asked the deputy if she was going to go to jail. Hawkins’ mother was contacted and told law enforcement she and McHone were on their way to the store. The mother told the officer they would take the toddler with them.

Hawkins was given a $3,000 secured bond and remains in the Rowan County Detention Center.

By Shavonne Walker shavonne.walker@salisburypost.com LANDIS — A Kannapolis man is expected to be charged with assault following a Friday night... read more