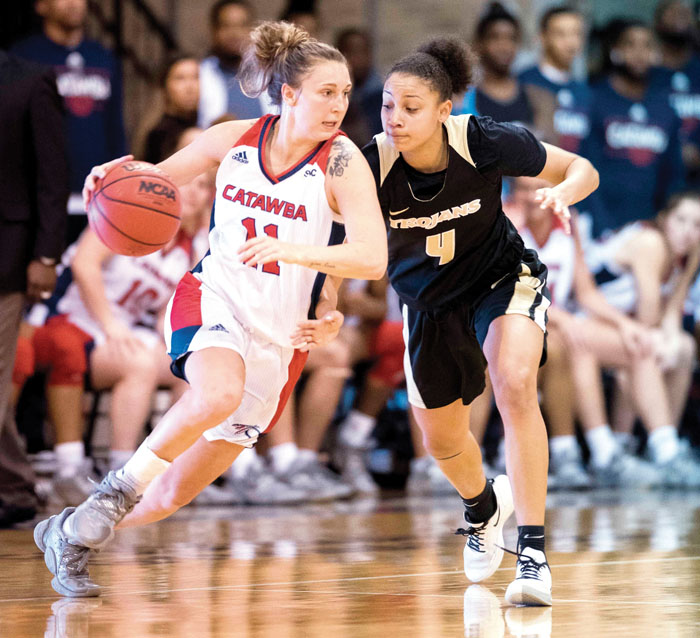 SALISBURY —In what may prove to be a defining game for the program, Catawba’s women’s basketball team handled Anderson on Wednesday and took over sole possession of first place in the South Atlantic Conference.

Anderson, 20-0 in the league last season, sets the bar in the SAC. Catawba jumped over it.

“People keep telling us that we’re off to a good start,” Catawba senior guard Madi Hallman said with a smile. “We’ve been taking it game by game, but now it’s more than just a good start. This was big for us.”

Catawba’s quickness and relentless trapping translated into an enormous 29-17 advantage in the turnover battle. Catawba scored twice as many points off turnovers as the Trojans did.

Catawba is third in D-II when it comes to forcing turnovers and 11th in turnover margin and did nothing to hurt those numbers.

“Pressure defense and hustle, that’s what we hang our hats on,” Catawba guard Shemya Stanback said. “And even when the shots aren’t falling, we keep shooting and believing in each other.”

Catawba didn’t shoot well from the field (30.3 percent) but the Indians were efficient enough from the 3-point line (nine makes) and foul line (21-for-30) to get it done.

“We may not have shot a great percentage, but we made really big shots at really big moments,” Catawba coach Terrence Baxter said.

That was the truth.

Everyone plays the ridiculously quick Stanback for the drive, but her tie-breaking 3-pointer late in the third quarter was a momentum-changer.

Hallman’s clutch 3-pointer for a seven-point lead and the first serious separation of the night came with 5:42 remaining and was immense.

With 4:18 left, Janiya Downs made a 15-footer for a 55-49 lead with the shot clock winding down. That was a backbreaker.

Taisha DeShazo’s 3-ball for a nine-point lead with 2:17 left brought a roar from the crowd and was the dagger that essentially started Anderson’s bus for the trip home.

There also was the 3-pointer that Emily Phillips made to give Catawba the lead at halftime.

“We had a bunch of starters sitting with two fouls, but we still got to halftime with a 31-29 lead, and that had to be disappointing to Anderson,” Baxter said.

Catawba’s defensive effort was focused on containing Anderson star Alexy Mollenhauer, a smooth 6-foot guard who can stroke it and scores 20 points per game. Marissa Bruce was instrumental in Catawba’s game plan. She guarded Mollenhauer for 16 minutes. Mollenhauer finished with a double-double with 14 points and 11 rebounds, but she was 5-for-14 from the field, 0-for-6 from 3, and had seven turnovers.

“No. 12 (Mollenhauer) is a very dynamic player, at her best when she can touch it and shoot it,” Bruce said. “We wanted to make her bring the ball up as much as possible and we wanted to force her to make plays on the move and to make plays when she was tired. We just kept moving and kept playing defense for 40 minutes.”

Freshman guard Lyrik Thorne got Catawba started. With a lot of people nervous on both sides, Thorne acted like she was just having fun in the driveway. She scored 10 of Catawba’s first 12.

“This was a night when Lyrik was going to go for 30,” Baxter said. “But then she got in foul trouble.”

Thorne finished with 18 to lead the Indians. DeShazo and Stanback scored 13 each, while Hallman had 10.

Up 17-16 after a quarter, Catawba managed that two-point halftime lead despite a serious scoring drought after Thorne sat down.

Catawba’s beat offensive quarter, by far, was the fourth when the Indians shot 6-for-11 from the field to seize the lead and 12-for-14 on free throws to protect it.

Freshman McKenzie Gadson, a Carson graduate playing close to home, had 12 points for Anderson on 5-for-9 shooting. She made two of Anderson’s three 3-pointers before fouling out late in the contest. A layup by Gadson with 7:40 remaining provided the last tie of the game at 46-all.

Anderson had more rebounds, but Catawba had more offensive boards. DeShazo and the 5-foot-5 Hallman grabbed eight rebounds each. DeShazo had some big ones on the defensive end as the Indians closed it out.