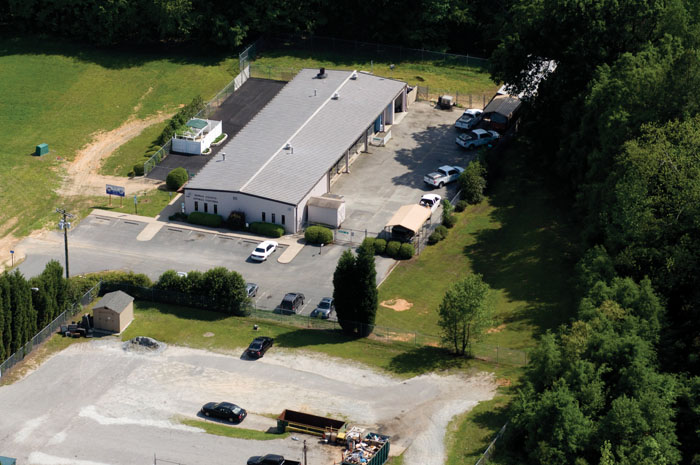 File Photo by Jon C. Lakey, Salisbury Post. Since this aerial photo was taken, a philanthropist donated funds for a cat wing that was built to the left of the Rowan County Animal Shelter. A dog wing will be built to the right of the shelter and the recycling site will be closed during construction.

SALISBURY — Construction work on a new dog wing at the Rowan County Animal Shelter could start as soon as April.

Rowan County Commissioners on Tuesday voted to make the April 1 the date on which it provide contractors for nonprofit Shelter Guardians, which plans to build a facility estimated to cost $1.8 million, access to land for the dog wing. The facility will be adjacent, but not directly connected, to the existing shelter. It will also extend onto the site of the county’s solid waste and recycling convenience center off of Julian Road.

Shelter Guardians’ dog wing will offer a spay/neuter, surgery preparation, dog recovery and visitation rooms. That’s in addition to a kitchen laundry room and bathing and grooming room for dogs. Funded by private donations, Shelter Guardians plans to donate the dog wing to the county after construction.

But the layout proposed by Shelter Guardians necessitated a decision by county commissioners, said County Manager Aaron Church. While the county had previously planned to build a new solid waste and recycling convenience site, Church asked commissioners whether they preferred to keep the existing site open and cause a “substantial delay” in construction on the dog wing or close the existing site, extend hours at convenience sites elsewhere and more quickly give Shelter Guardians access.

Commissioners chose the second option. Church said the closure would be a small inconvenience for the benefit locals will receive. He said the county will build a “state-of-the-art convenience center” and a new road that provides two access points to what’s historically been the county’s busiest site. That’s not to mention the construction of a dog-centric wing for the Rowan County Animal Shelter.

“With a short window of inconvenience, there will be a tremendous improvement to the site,” Church said.

Sinclair’s plan, which commissioners approved, is as follows:

• At the county’s Rock Grove Church Road site, the schedule will move to Monday through Saturday from 7 a.m. to 7 p.m. — an addition of three days of service.

• At the Providence Church Road site, the schedule will move to Monday, Friday and Saturday from 7 a.m. to 7 p.m. — an addition of two days of service.

• At the Woodleaf Road site, the schedule will be Monday through Saturday from 7 a.m. to 7 p.m. — an addition of two days of service.

• At the Stokes Ferry Road site, the schedule will be Monday, Friday and Saturday from 7 a.m. to 7 p.m. — an addition of one day of service.

With Julian Road being the county’s busiest convenience site, Sinclair said he explored created a temporary solution there, but it wouldn’t be serviceable for the volume of traffic.

• Commissioners approved an agreement with Shulenburger Surveying Company for surveying work around the existing Rowan County Animal Shelter for a new building and recycling convenience center.

• Commissioners approved a change order for construction of an EMS station in Cleveland, which is being built on the site of the former Cleveland Elementary School

• Commissioners also approved a change order to replace broken windows in Cleveland Elementary School’s former auditorum, which will be incorporated into a new West Rowan Branch of the Rowan Public Library.

• Commissioners approved a total of $21,986.80 in change orders for a kitchen project at Ellis Park. An architect working on the project found water damage and rotten wall supports in addition to other deterioration.