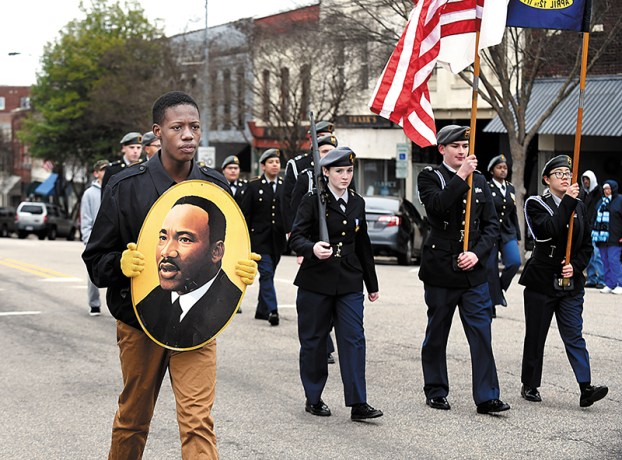 The West Rowan High JROTC in the MLK, Jr. parade. photo by Wayne Hinshaw, for the Salisbury Post

Both the tone and language of the question from a reporter and civil rights icon Martin Luther King Jr.’s response should be as illuminating now as they should have been then.

“Every other group that came as an immigrant somehow, not easily but somehow, got around it,” a NBC reporter asked King during a May 1967 interview at Ebenezer Baptist Church in Atlanta.

The question immediately had followed a statement by King about excuses to create an “installment plan for equality.” So, when the reporter asked about getting around “it,” he was likely talking about inequality.

King started his response by saying something or someone becomes “thingified” and depersonalized the moment he, she or it is used as a means to an end.

Africans were brought to America as slaves in chains and against their own will. King said that led to the “thingification” of black Americans who were not given the same status as other human beings. The color of their skin became a stigma, he said.

“America freed the slaves in 1863 through the Emancipation Proclamation, but gave the slaves no land, or nothing in reality, to get started on,” King told the reporter. “At the same time, America was giving away millions of acres of land in the West and Midwest. And there was a willingness to give the white peasants from Europe an economic base. Yet, it refused to give it to black peasants from Africa who came here involuntarily in chains and had worked free for 244 years.”

Without an economic base from which to start after emancipation, King said, newly freed slaves had freedom, but it was freedom without food to eat or land to cultivate.

“It was freedom and famine at the same time,” he said.

When white Americans tell black Americans to lift themselves up by their bootstraps, King said, they “don’t look over the legacy of slavery and segregation.”

“It’s a cruel jest to say to a bootless man that he ought to lift himself by his bootstraps,” he said.

Many black Americans, by the thousands and millions, have been left “bootless” by hundreds of years of oppression, King told the reporter.

On Monday and during events in days prior, Salisbury celebrated and remembered King’s legacy, but it’s not enough to simply remember his work one day per year. There’s still work to do.

The city of Salisbury in early 2019 took an extraordinary step in passing a resolution recognizing past, present and future injustices and committing to action. Then-Mayor Al Heggins said the passage of the resolution showed Salisbury was a “leading southern city” that can embrace its history, the good and the bad, and do better.

That’s why there’s still work to do for the “new phase of the struggle,” as King described it in the same interview. The country had moved passed “a struggle for decency to a struggle for genuine equality,” King said.

So, it’s time to think more critically about why it’s wrong to insult children, as some in our community have, at Koontz Elementary School and others the state deems “low-performing” and why closing Overton Elementary and simply renovating Knox Middle is wrong when the school system has the ability to do something more ambitious and exciting for students —a new K-8 school. Instead of viewing “renewal” in the Rowan-Salisbury School System as a means to measure success differently, it’s time our community collectively views it as one step toward giving all children the same opportunities in life.

Rowan-Salisbury School Board members aren’t the only ones thinking about consolidation in 2020. While commissioners have already promised funding, they... read more