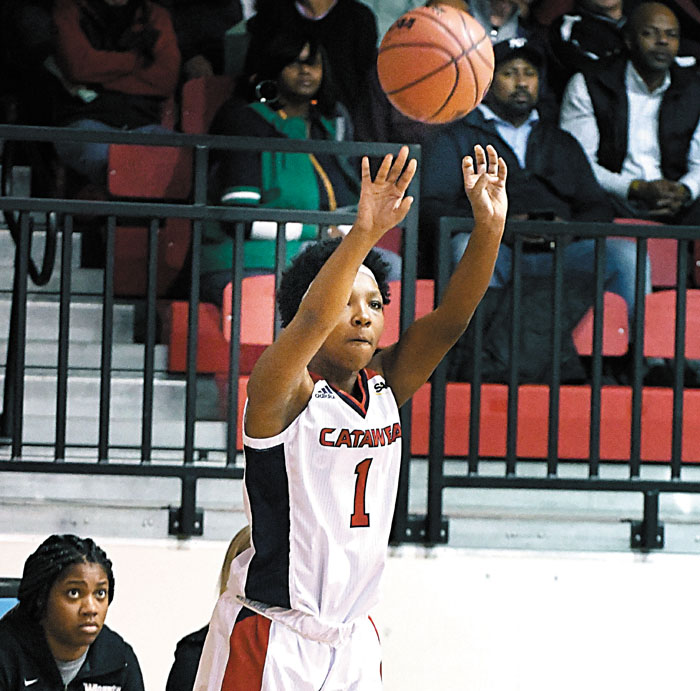 Wayne Hinshaw file photo/for the Salisbury Post ... Catawba’s Janiya Downs (1) shoots during an earlier game against Wingate. On Saturday, Downs, a former star at South Rowan, helped lead the Indians past Lenoir-Rhyne, 67-57. Catawba remained in a first-place tie with Anderson.

SALISBURY —  Veterans Madi Hallman and Taisha DeShazo led the scoring, and freshmen Lyrik Thorne and Janiya Downs made the key plays in the fourth quarter.

“We didn’t accomplish all our goals today because we really wanted to play everybody,” Catawba coach Terrence Baxter said. “The score and situations dictated that everyone didn’t get in, but it’s another win.”

What Catawba does better than just about anyone is create turnovers with relentless ball pressure. The Indians rank third nationally in Division II in that stat. They forced 23 turnovers against the Bears (6-10, 4-6).

“That’s a really big key for us — limiting our turnovers,” Downs said.

Downs, a South Rowan grad who was the No. 2 all-time scorer in Rowan County, missed Catawba’s first eight games with a quad injury. She’s just now rounding into playing shape and made her biggest contribution so far. She had 10 points, two rebounds and two steals in 16 minutes.

“We know we’ve got some freshmen who are going to be special,” Baxter said. “They had some good moments today. Janiya really opens up the floor for us on offense, and today she played both sides of the floor.”

Downs said her biggest college adjustments have been when Catawba doesn’t have the ball.

“I’ve been terrible on defense,” Downs said. “And defense is so important for us because our defense leads to offense. I was a little better today. I finally took a charge. Everyone was happy for me.”

DeShazo (12 points) got the Indians off to a decent start and they led 18-15 after a quarter.

The Bears shot 6-for-11 in the third quarter to stay in the game. Catawba took a 49-39 lead to the fourth quarter.

Thorne delivered the first five points of the fourth quarter to stretch the Indians’ lead to 15. She took it hard to the goal for a three-point play, then drove again to earn two free throws.

“That’s what I do best,” Thorne said. “They were crowding me. I just saw the openings, and I was aggressive.”

With Catawba leading by eight with 2:29 left and the shot clock running down, Downs made one of the bigger shots of the game when she nailed a 3-pointer from the left wing after a pass by DeShazo.

“Their defense was focused on Taisha and they left me wide open,” Downs said. “I just let it go and knocked it down.”

DeShazo made a clinching 3-pointer from in front of the Catawba bench with 49 seconds left. It was a somewhat reckless shot attempt that surprised Baxter as well as everyone else in the gym, but she drilled it.

“If you take that one, you’ve got to make it,” Baxter said.

Madeline Hardy had 16 rebounds for the Bears, with 14 of them ending Catawba possessions. Kennedy Weigt made four 3-pointers and scored 14 points.

“We’ll need everybody on the roster to win this one,” Baxter said. “It’s a big one. We’ll all have to be locked in.”