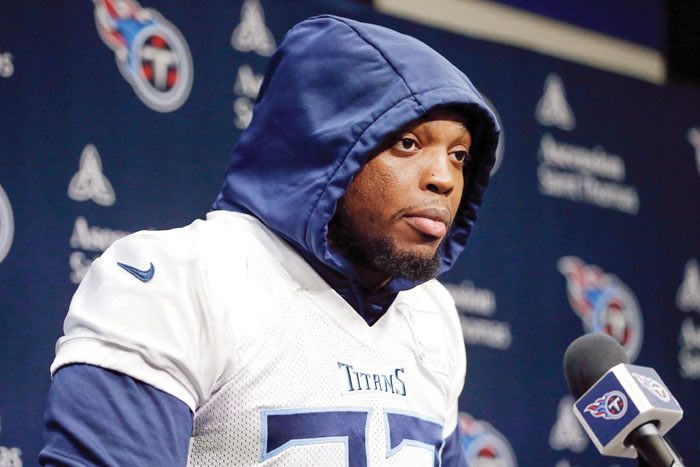 NASHVILLE, Tenn. (AP) — Derrick Henry is making clear he only gets better the more times he gets the ball.

“I think I get in a rhythm the more carries I get,” Henry said Thursday. “I get a better feel for the game as the game goes on.”

After the Titans gave him 30 or more carries only once through his first three seasons, Henry now has carried 32, 34 and 30 times in each of the past three games. He has set the franchise single-game rushing record twice this postseason, topping himself in each game and helping Tennessee into Sunday’s AFC championship game against Kansas City (13-4) for the team’s first appearance since the 2002 season.

The Titans are using the 6-foot-3, 247-pound Henry as a powerful battering ram.

That’s what Nick Saban did during Henry’s Heisman Trophy season while winning the 2015 national championship at Alabama. Saban told The Associated Press that watching Henry run this postseason is very similar to the load the running back handled late in that 2015 season.

Saban said that’s who Henry is.

“He’s a big strong guy. He’s fast. He’s hard to tackle. He’s got a great stiff arm,” Saban said. “He’s got a lot of confidence in his ability. He’s very instinctive as a player, and he’s being utilized in a way that features all those talents now. That’s what we did based on the kind of team we had his last year in 2015, and he delivered for us the same way he’s delivering for them.”

Believing the Titans’ only offensive threat is Henry would be a mistake even if Ryan Tannehill didn’t have to throw for more than 88 yards in either Tennessee’s win at New England or at Baltimore.

Tannehill became the NFL’s top-rated passer after taking over in mid-October, and the Titans’ offense has been among the NFL’s most potent since then with him spreading the ball around.

They led the league over the final 10 weeks of the regular season averaging 6.94 yards per offensive play. They averaged 30.4 points a game in that span, which was third behind only Baltimore and New Orleans. They managed 406.2 yards as well, behind only Dallas and Tampa.

The Titans led the NFL scoring touchdowns on 75.6% of trips inside an opponent’s 20, and they’ve been even better with Tannehill scoring on 31 of 35 red zone trips (88.6%). Tannehill said the Titans have been through a lot of ups and downs this season and won games in a lot of different ways. They also led the NFL with 13 different players scoring at least one TD  inside the red zone, including the playoffs.

“With that comes a lot of belief and a lot of confidence in one another that it doesn’t really matter what play call comes in, we’ll find a way to make it work,” Tannehill said. “Obviously, Derrick is running his tail off right now, and the receivers are doing a good job of making plays when the opportunities come.”

The biggest difference may be on the offensive line. Coach Mike Vrabel joked this week the Titans couldn’t put any more money into the left side with Taylor Lewan made the highest-paid left tackle in July 2018  and left guard Rodger Saffold signed last March to a $44 million deal. They also drafted Nate Davis, who moved into the starting lineup at right guard in October.

The group simply needed time together, and the bye week in November helped. Now the linemen have meshed and are being very physical, a difference easily seen with only two sacks allowed over the past three games.

“We have a lot of confidence as a group, and it’s really allowing us to push people down the field creating run lanes for Derrick,” Saffold said. “It’s allowing us to get time for Ryan to throw to his receivers … You add all that together, you have a great offense. That with the defense playing outstanding, we’re a tough team to beat.”

The Titans are playing so well together that the Ravens couldn’t slow Henry down as he ran for 195 yards in their 28-12 divisional win. They had eight or more defenders close to the line on 63% of Henry’s rushes or 19 times. He finished with 124 yards, the  most by any player in a game  with at least eight close to the line this season according to Next Gen Stats.

But then Henry also faced the  most stacked boxes  with at least eight or more defenders all season on 135 carries, and he led the NFL with 729 yards and 13 TDs in those situations, according to Next Gen Stats.

The Chiefs gave up 188 yards rushing to Henry on Nov. 10 on just 23 carries. Kansas City linebacker Anthony Hitchens said they’ll have to gang tackle Henry the way he’s running wild right now, and they know just where to target.

“Kill the engine,” Hitchens said. “Hit his thighs, hit his legs, take him down. If you hit him high, he’s going to carry you for another 5 yards.”

If the Titans ask Tannehill to hand off to Henry another 30 times, the quarterback is ready.

“Obviously I love throwing the ball, but I just want to win,” Tannehill said.