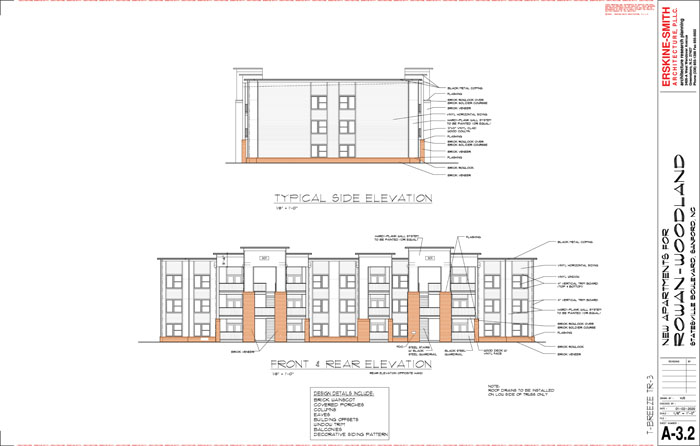 SALISBURY — A developer looking to add an apartment complex off of Statesville Boulevard received the Planning Board’s recommendation for rezoning on Tuesday.

The neighboring apartment complex will not connect and the applicants are making a request to be annexed into the city limits.

The 10-building complex would offer one-, two- and three-bedroom options. It would also have a community clubhouse and three accessory structures for garages and maintenance facility storage.

The parcels are in Salisbury’s extraterritorial jurisdiction and have a “nice blend of several zoning districts if corridor mixed-use, residential mixed use and open space primary,” said Catherine Garner, the city’s development services specialist.

Developers requested to combine parcels and make it all corridor mixed-use.

“This would clean that up,” Garner said. “Multiple zoning on one parcel is not favored in the planning and zoning realm.”

The corridor mixed-use zoning district allows for high density residential areas. Garner said the zoning was created in the late 2000s to market for development.

The applicants proposed one special condition for the elevation of one residential building to follow the land development ordinance. The city’s ordinances state side elevations facing a public street must be 30% transparent with windows, doors or porches, according to Garner. The applicant said it wouldn’t be feasible for them to get to the 30% transparency number, but proposed to add an outdoor kiosk, like a picnic structure, that could be a common area for residents.

Member Bill Burgin said the ordinance was put into place to avoid an empty wall that would have a boring appearance from the street. Burgin said he liked the idea of the alteration.

Cranford said a similar apartment complex they are constructing in Sanford has seen the installation a community art piece. He said developers would be open to that, but the kiosk for residents make sense for the Salisbury complex.

Margaret Lipe, a realtor with Wallace Realty, spoke in favor of Rowan Woodland Apartments. Lipe said there is a lot of commercial and industrial buildings on Statesville Boulevard and a need for housing, especially affordable housing.

Lipe said she called around to other apartment complexes, including Gold Hill Apartments and The Grant on Julian, to find both have a waiting list. She said the additional apartments will spur development and be good for the city.

Because the design of a common area was not finalized, developers will have to bring the alternative design back for staff approval. The board unanimously approved a recommendation for the rezoning with a conditional district.

The applicants will go before City Council for approval on Feb. 3.

Chair Bill Wagoner said the project is great for the community.

• The board tabled a rezoning for a residence on 506 W. Marsh St. and asked for a Planning Board committee to evaluate that parcel and neighboring parcels. The applicant requested a rezoning from general residential to urban residential to bring the property in compliance.

Silverio Confesor is looking to purchase the property, which was built as a single-family home and later converted to a multifamily home in 2017. The house has a first floor residence and two upstairs apartments. At one point, the detached garage served as another apartment.

Wagoner questioned if the house was converted into the three units without North Carolina building permits.

Members also asked if the tax card for the property was single family or multifamily and if the contract paperwork for the sale specified.

Schaffer said the proposal had issues that need to be resolved before the Planning Board rezoned the property.

Neighbor Jessie Ellison said she was against the rezoning and said she has complained to the city multiple times about the property. She said it’s a nice quiet neighborhood and neighbors didn’t want traffic that comes with a multifamily rental unit.

After looking at neighboring parcels, which are urban residential, the rezoning would create an island of general residential.

Wagoner offered that a committee look at the area and come back to the board with a recommendation. Until then, he said, the request for rezoning would be tabled, to which the board unanimously agreed.