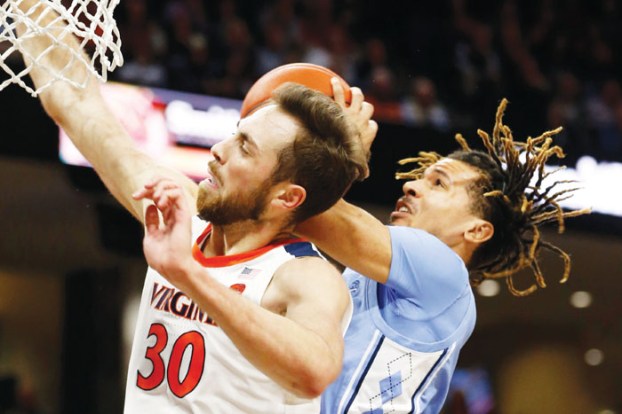 Injured players with a lot on their minds 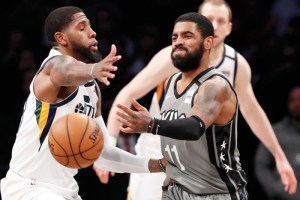 AP Photo/Kathy Willens
Utah Jazz forward Royce O’Neale, left, defends as Brooklyn Nets guard Kyrie Irving (11) passes the ball during the second half of an NBA basketball game Tuesday, in New York. Irving played in just 11 games while a freshman at Duke, due to injuries.

CHAPEL HILL (AP) — When college stars like Cole Anthony are injured, they are faced with the question of whether they should they return or just sit out the season to protect their looming draft prospects.

Like Anthony, who has said he plans to return to action with North Carolina, most want to return to the basketball court, which has proven to be a good option — provided they’re healthy. Look no further than last year, when Zion Williamson returned to Duke’s lineup after a freak injury and went on to become the No. 1 pick in the NBA draft.

The more prospects can showcase how they handle game situations certainly helps in their NBA draft evaluations.

“Seeing them play in a game is always going to be better than an individual workout or 3-on-3,” said Ryan Blake, an NBA consultant with a long scouting background said of players in general. “That doesn’t mean those aren’t important. One of the most important things is getting to know a player, during the drive from the airport to having dinner. … The combine, individual workouts, those are important as well.

“But it’s always to get as much intel, and in-game situations, there’s so much more that you can get from that, too.”

Williamson, fellow No. 1 overall draft pick Kyrie Irving and first-round pick Michael Porter Jr. are some of the highest-profile players who have faced that decision. Each returned to finish his lone college season.

Williamson has yet to play for the NBA’s New Orleans Pelicans following surgery on his right knee in October. He recently started full practices and Pelicans executive vice president of basketball operations David Griffin said Wednesday he anticipates Williamson making his NBA debut Jan. 22 against San Antonio barring any setbacks.

As for Anthony, he has been actively cheering on Tar Heels teammates from the bench and offered some hope for UNC fans Tuesday night, replying to an Instagram post: “I will be back soon.”

North Carolina has struggled without its point guard, who had arthroscopic surgery Dec. 16 to repair a partially torn meniscus in his right knee. His projected recovery time was 4-6 weeks.

The Tar Heels beat current No. 8 Oregon in the Battle 4 Atlantis with him, but have lost five of seven without him to slide near the bottom of the Atlantic Coast Conference standings. That includes last weekend’s first-ever home loss to Clemson in 60 meetings.

The coach has outlined a simple plan for Anthony: “I’m going to treat him like he was my son, like I would his want his parents to treat my son.”

Williams said no one at North Carolina would push Anthony to return, adding “He’s got to feel completely safe about it himself.”

But that doesn’t stop the question.

The topic of whether a top prospect should return from injury has become more common in recent years amid the NBA draft’s minimum age requirement that typically steers a handful of players to college basketball for one season.

It follows a recent trend in college football that has had some NFL prospects skip bowl games rather than risk a career-jeopardizing injury ahead of the draft.

“I think it’s an extension of the way we’re looking at things so much more in college these days, and it’s through an economic prism,” said Chris Spatola, a former Army player and Duke director of basketball operations who now is ESPN analyst. “So when you look at it strictly through a static economic prism, it basically comes down to: ‘OK, what is he risking in terms of his financial future moving forward?’

“But what you ignore is the human element to this. And I think, to me, … those guys want to play. They want to be a part of their teams, at least for the limited time that they’re going to be in college.”

It wasn’t nearly as much of a discussion nine years ago when Irving went down with a toe injury after just eight games as Duke’s freshman point guard. He returned for three NCAA Tournament games before going No. 1 to the Cleveland Cavaliers.

By comparison, that conversation was rolling about Williamson even before he suffered a freak-injury knee sprain that would sideline him for nearly six full games, with NBA Hall of Famer Scottie Pippen among the shut-it-down supporters in an ESPN interview.

But Williamson returned to lead Duke to the Atlantic Coast Conference Tournament championship and the NCAA Elite Eight.

“For people who said I shouldn’t return,” Williamson said during the ACC trophy presentation, “I couldn’t abandon my brothers and coaches like that.”

Porter understands that feeling, too.

It was in 2017 when the 6-foot-10 current Denver Nuggets forward arrived at Missouri as a possible No. 1 overall pick, only to play 2 minutes before needing back surgery. He was expected to miss the rest of the season, though he recovered enough to play one game for the Tigers in the Southeastern Conference Tournament, then one in the NCAA Tournament.

Porter fell to No. 14 in the 2018 draft, though he could prove to be an injury-discounted steal for the Nuggets. In an interview with The Associated Press, the rookie who sat out last year to rehab his back was asked what advice he’d give another top pro prospect recovering from injury.

“I would tell him if he feels fully, fully recovered — back to 100% — college is an amazing time of your life,” Porter said. “That’s going to be some of the most fun you’ll ever have. If you can get back out there and be 100%, do that. If you’re feeling a little limited, you’ve got to make sure you’re fully recovered.”