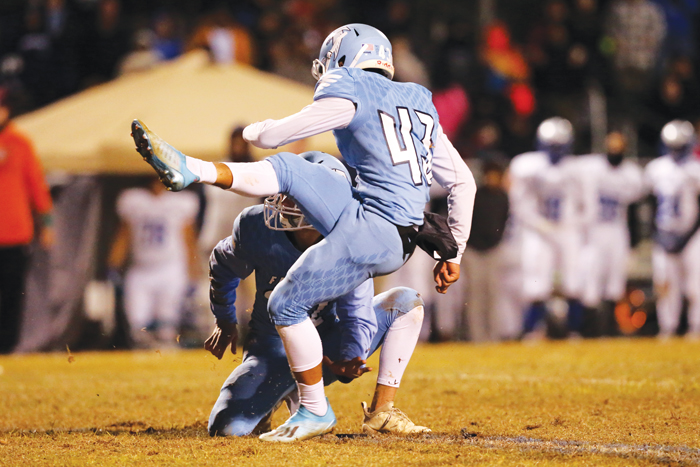 Salisbury kickoff returner Cameron Gill won in the 2018 debut of the award.

West has featured exceptional kickers more often that not since 2000. There’s been Steven Meseroll, Brent Patterson, Ben Erdman, Matt Turchin, Bertin Suarez, Hobie Proctor and Zack Russell, to name only about half of them,  but Cruz is the first Falcon to surpass 200 career kicking points.

“Federico has spoiled us,” West head coach Joe Nixon said. “We haven’t had to worry about who was kicking for a long time.”

While West hasn’t had to worry about who was kicking, the Falcons never stop emphasizing excellence in the kicking game. For decades, it’s been a big part of who they are and what they do.

“End each possession with a kick — whether it’s a PAT or a punt” was a frequent mantra offered by the late Scott Young when he was West’s coach, and Nixon has maintained West’s dedication to winning the special teams battle every Friday.

“You always want your best 11 in the kicking game,” Nixon said. “I don’t know that every program emphasizes the kicking game as much as we do, but we know that’s where a lot of games are going to be decided.”

Cruz didn’t get to boot as many PATs as the Falcons used to kick because the Falcons don’t score as many TDs as they used to score.  Turchin banged through a school-record 73 PATs in 2008.

Cruz was one of those one-man kicking games. He handled kickoffs and punts as well as PATs and field goals.

Like a lot of high school football kickers, Cruz’s first sport is soccer. A defender, he served as a captain for West soccer coach Alan Puglia and made all-county on the pitch.

“Yes, I was always soccer first, but I also enjoyed football very much,” Cruz said. “I got started with football in  the eighth grade.”

On days when West was practicing soccer and football, Cruz went to soccer practice, but football practice generally ran longer, so he was able to get there for the last 30 minutes or so.

“Our soccer coach works well with us, and we were able to work out special teams around Federico’s schedule,” Nixon said. “We got some kicks in every day.”

Cruz kicked two field goals against Cox Mill and Carson, but his biggest field goal of the season was in the 24-21 win over Davie.

“That one was in the fourth quarter with the game tied,” Cruz said. “That one turned out to be a game-winner, a very big win for us.”

With 4:10 left in the game against Statesville, Cruz made the clutch field goal that tied the game at 24-all, although West eventually lost in overtime.

“We always felt like if we could move the ball inside the 30, Federico gave us a good chance to score,” Nixon said.

Cruz isn’t big, but he’s an athlete and doesn’t mind being physical when it’s necessary.

“It was nice to have a good athlete back there because he made some big tackles that saved us,” Nixon said.

Cruz remembers a touchdown-saver on a kickoff against Concord.

There was another saving tackle in West’s surprising win at No. 1 seed Crest in the 3A state playoffs. Cruz was the last man who had a chance, but he was able to get to the sideline and bump a speedy return man out of bounds.

His career also was pretty amazing. He provided a lot of points for a long time.

“Most weeks there were two soccer games and a football game and there were practices on the other days,” Cruz said. “There was school and I had a part-time job, but I liked balancing all four things. I enjoyed staying busy.”