With a T-shirt for each student, Overton continues tradition of giving 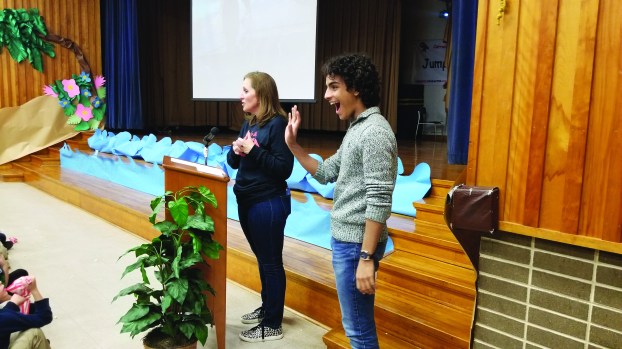 Carl Blankenship/Salisbury Post - Fran Lescoe and Ali Khatib standing in front of the students of Overton Elementary. Khatib is a Salisbury High School student and spoke to the kids about finding their passions. 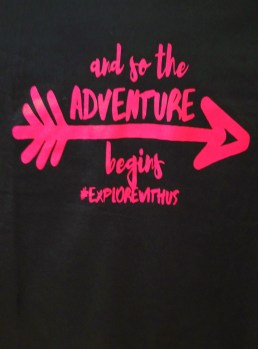 Carl Blankenship/Salisbury Post - The design from the shirt given to all the students at Overton Elementary.

The school has uniforms so everyone is dressed the same, with no difference between the way those from poor and more well-off families dress. But that does not mean everyone comes perfectly equipped.

For the third year in a row, every student at Overton has received something to wear at school. It started two years ago when Overton became one of the first schools to take on Healthy Rowan’s Daily Mile. Every student in the school was given a new pair of New Balance tennis shoes to run and walk in.

On Friday, each student was given a “spirit-wear” T-shirt as an approved piece of clothing noting, “And So The Adventure Begins.” It offers something different for special occasions at the school as well.

The giveaways are the brainchild of Communities in Schools Student Support Specialist Fran Lescoe. When Overton began taking part in the “Daily Mile,” Lescoe knew the students would need the right footwear.

The school sells spirit shirts, but not everyone can afford one.

“I wanted everybody in the school to have a spirit shirt,” Lescoe said.

Lescoe said anonymous donors made each of these giveaways possible, though the school bought popcorn for students during the special assembly they gathered for Friday.

As students filed in, they got popcorn and settled in for a talk from Salisbury High School sophomore Ali Khatib.

Khatib spoke about searching out their passions, which he has found in being creative.

“There are countless things to be passionate about,” Khatib said. “So discovering what that thing is going to be for you is going to take some exploring.”

After watching an inspirational video, the surprise gift of new shirts was revealed.

Students can wear them any day they like. Communities in Schools also helps provide uniforms for those in need as well.

Overton’s future has become uncertain as the the Rowan-Salisbury Schools Board of Education is determining the future of Knox Middle School, and Overton as a result.

No decision has been made on what will happen to the school, but two scenarios have been discussed. One would be for Knox students to be move into Overton while the middle school is undergoing major renovations.

Another scenario would be to build a K-8 facility that would house students from the two schools when complete. That issue will be discussed at Monday’s school board work session.

“We are not moving. We are going to continue to explore,” Lescoe said, referencing the school’s mascot.