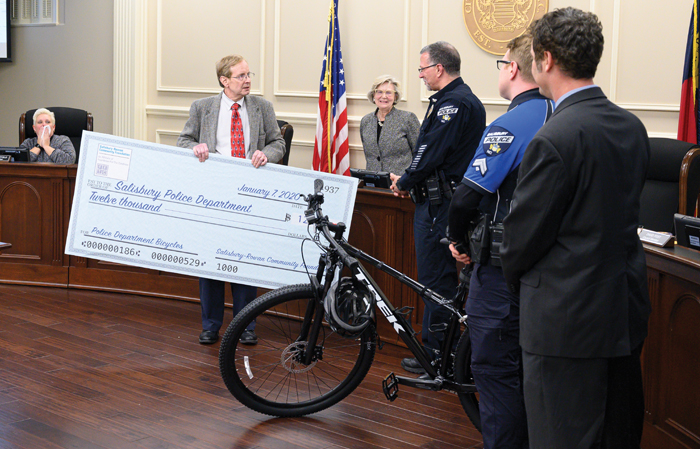 Josh Bergeron / Salisbury Post - The Salisbury-Rowan Community Foundation on Thursday presented a check for $12,000 to the Salisbury Police Department to purchase several new bikes. Pictured in the foreground is one of those bikes.

SALISBURY — Coming this spring to a city event near you: the Salisbury Police bike patrol unit.

The unit comes thanks to the contributions by local business leaders and the Salisbury-Rowan Community Foundation.

“The bikes will allow police officers to maneuver around parks and help with community policing,” said Salisbury Police Chief Jerry Stokes during a council meeting this week where he accepted a $12,000 check.

The check from the Salisbury-Rowan Community Foundation will allow the department to buy roughly six bikes.

The idea had been simmering since the fall of 2019. It was something that was needed, Shulenburger said.
He said the department had a few bikes, one of which was used by the department’s downtown officer before Segways, but those are outdated. The contributions will provide for six high-quality Trek police edition bicycles as well as equipment and uniforms, Shulenburger said.
The bike patrol will be made up of members from the Neighborhood Crime Abatement Team, Shulenburger as well as Detective Jacob Easler.
“I think it’s a good way to enforce crime and to be closer to the community,” Easler said.
Easler said he’s always wanted to see a bike patrol at the Salisbury Police Department.
The bicycles will be marked that they are Salisbury Police-issued and equipped with a blue light. The bicycles would be used for special projects, hot spot patrols and other special events like the Cheerwine Festival and parades.
It’s expected there will be eight officers who will undergo training through a nationally accredited organization before they are road-ready. The training will take place in Salisbury, Shulenburger said. Training will include riding over different terrain, around obstacles and curbing in an urban environment, Shulenburger said.
Easler, who has attended bike patrol training in the past, said it includes standard items.
“It will include standard safety, maintenance, how you would travel if you’re traveling in a line and proper signaling, crowd control; to use the bike as barriers in the movement of people,” Easler said. “The cool thing about it is it’s a very effective and underrated tool in law enforcement. Back in the late 70s and early 80s bike patrol was used but we fell away from that.”
He said it’s also a quieter mode of travel. And he recalled one instance where a patrol bike came in handy.
Easler and Lt. Andy Efird were working extra duty during a 5K event at the greenway. The department received a 911 call about a stabbing in the 500 block of East Innes Street. Easler said he and Efird were able to find the suspect hiding in a bush. The suspect had no idea they were approaching.
“That’s the value of bike patrol,” Easler said.
The Salisbury-Rowan Community Foundation funds programs and projects that address a community need and benefit residents of Salisbury or Rowan County.
Previous recipients include the Center for Faith & the Arts, which received money for its art gallery and performance art center and the Appleseed Early Childhood Education for the ApSeed Project as well as the city of Salisbury for BlockWork.
The projects are funded through community donations.
Contact reporter Shavonne Walker at 704-797-4253.