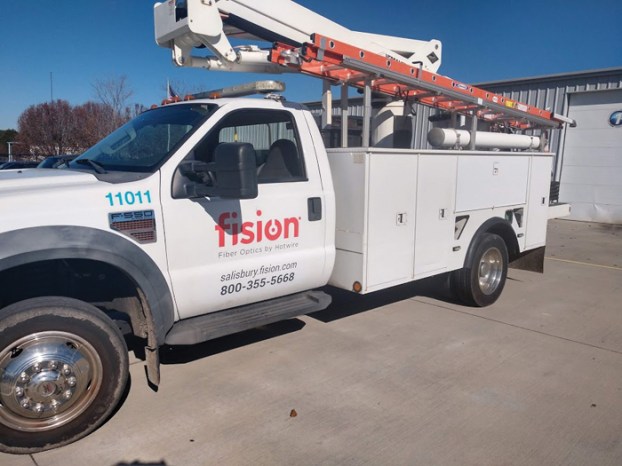 A truck is parked displayed with "fision, Fiber Optics by Hotwire."

The city of Salisbury is inching closer to a projected debt payoff date of 2029 for the city’s fiber-optic network, formerly named Fibrant and now operated by Hotwire. In the meantime, the city’s net position for the fiber-optic network has been steadily improving according to Salisbury’s fiscal year 2019 audit presented to the council Tuesday. The 2019 fiscal year started in July 2018 and ended June 30, 2019.

Called the Broadband Services Fund, the fiber-optic network had more than $23 million in total bonds, notes and other loans. That outstanding debt, which stems from the network’s initial installation, is part of the reason the fund’s net position is still $6.1 million in the red. But it has improved. Just three years earlier, the fund’s net position was $10.43 million.

That the fund still has a net negative position was the only negative finding in the fiscal year 2019 audit — a repeat finding from the prior several years.

“We certainly have things we need to do still, and we’re working to improve there,” said City Manager Lane Bailey. “This is the first partnership of its kind in this area of North Carolina. … I think we have a good partner and I think it’s positive.”

Councilman David Post told the Salisbury Post Wednesday that he thought the Broadband Services Fund was much better off now than it was just a few years ago. Growth from Hotwire could help the city reduce its transfer from the general fund, which was $3 million in the 2019 fiscal year, and divert that money to other areas of need.

During and after Tuesday’s meeting, Bailey said he was most concerned about the city’s transit system fund, which operated at a loss in the 2019 fiscal year. He said that’s due in part to a limitation on available federal funding.

“We also provide (transit) services outside of our corporate limits and we don’t get reimbursement for that,” Bailey said. “That’s going to be something the council will have to take a hard look at.”

In other notes from the fiscal year 2019 audit:

• The total value of property in the city, excluding motor vehicles, is $2.64 billion. But the total levy on that property generates just a fraction of that.

• At $16.28 million, the city spent less from the general fund on public safety (fire and police) in the 2019 fiscal year than the prior year, when Salisbury spent $17.60 million. The city had budgeted to spend $17.5 million

• The city of Salisbury had a total of 420 employees at the end of the 2019 fiscal year, which is actually lower than 10 years ago when the city had 457 employees.

‘Why not’: Southeast Middle uses renewal flexibility to give students new experiences

By Carl Blankenship carl.blankenship@salisburypost.com SALISBURY – As part of its “renewal” flexibility and with a theme of “building connections,” Southeast... read more