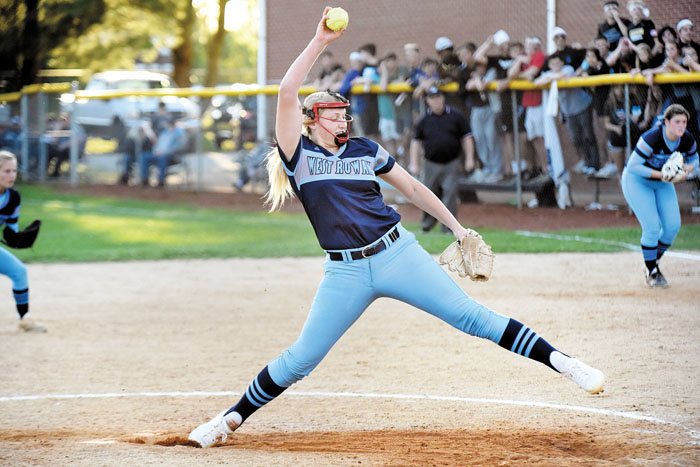 SALISBURY — Christmas decorations are still hanging, but “spring” sports are just around the corner for Division II schools such as Catawba.

Softball coach Mandy Harris-Morgan has more enthusiasm than 10 of Santa’s elves and sounds bubbly about the official start of practice on Friday. The first scheduled games for Catawba — at home on Feb. 1 — are less than four weeks away.

Catawba was 22-21 in 2019, Harris-Morgan’s first season. That was with eight one-run losses and four losses by two runs in a South Atlantic Conference that set records for parity. Catawba finished three games out of first place and one game above last place in a frantic, 11-team jumble.

“We were one hit away, one pitch away, one error away from a lot more wins and a great season,” Harris-Morgan said. “So I’m very excited about getting back out there.”

A lot of positive things have happened for the program. Lights at Whitley Field were dedicated on October. That doesn’t mean there will be a sudden switch to night games this season, although the Indians do have the option now of starting doubleheaders later.

The biggest impact of the lights will be on practice.

“It’s been hard to get all 25 girls out there to practice during the day because we’ve got a lot of nursing majors and recreational therapy majors who are at hospitals,” Harris-Morgan said. “Now it’s a lot easier to get everyone together.”

There were major weather issues that impacted Catawba’s preparation for last season, with Whitley Field underwater from hurricanes, at times. But the weather has been quieter, and Catawba is way ahead of where it was at this point a year ago.

“We had an awesome fall,” Harris-Morgan said. “Taylor Martin. Gracie Gibson, Brooke Lowery, we had a lot of girls who had a tremendous percentage of quality at-bats.”

Recruiting is almost non-stop, but Harris-Morgan already has had a good haul, with four early signees.

West Rowan pitcher Whitley Arnott, who racked up numerous accolades as a junior, including Rowan County Pitcher of the Year and North Piedmont Conference Pitcher of the Year, is the Catawba recruit who is familiar to just about everyone.

Arnott struck out 242 batters as a junior, one of the state’s top totals. She was 21-4 with a 1.01 ERA as West, coached by Jimmy Greene, reached the third round of the state playoffs and achieved a top-15 ranking statewide.

“As soon as I got the job, people were telling me I needed to go see Whitley, and I think I went to see West play every time they played if we didn’t have a game ourselves,” Harris-Morgan said. “The recruiting process with her took a while, but that was fine. We wanted Whitley to get to know us and we wanted to give her all the time she needed to make her decision. She’s a big recruit for us. We don’t have anyone quite like her on our staff now. We’ve got pitchers who are effective working down, but with the rise ball she has, Whitley can get hitters out working up.”

Arnott has movement and velocity.

She had a 17-strikeout game against Davie County last season and pitched a two-hitter against Mooresville, a team loaded with college recruits and one of the stronger teams in 4A.

In the second round of the 3A state playoffs, Arnott had 16 strikeouts and zero walks.

She also swings the bat with some authority. She hit .338 with 23 RBIs for West last season.

Arnott, who is 6 feet tall, athletic and strong, had a lot of options, but she decided to stay close to home. She made a verbal commitment to Erskine when she was a sophomore, but she reopened recruiting some time ago.

“Catawba was at a lot of my games, and I know they’re only about 10 miles down the road, but that was very important to me that they kept coming and showing an interest in me,” Arnott said. “I like Catawba’s plans. I like their ideas. When they told me what their goals were, that’s the same goals that I’m striving for. It also was important that I got to meet the whole Catawba family. Not just the players, but the parents of the players. I got to know a lot of them, and I feel very comfortable there. It’s close to home, but it’s still far enough away that I’ll be on my own and growing up.”

Arnott plans to major in education with a sport and fitness minor and aspires to become a teacher/coach.

She is currently one of the standouts for an undefeated West Rowan basketball team that just won the Christmas tournament at Catawba.

“We really liked that about her,” Harris-Morgan said. “We love to recruit multi-sport athletes. It’s good for Whitley to get a break from softball, through basketball, and basketball keeps her in shape and challenges her physically, mentally and competitively.”

Catawba has three senior pitchers, so Arnott is a key recruit. Harris-Morgan wants to recruit a pitcher and a catcher every year.

The other three high school seniors that Catawba has signed also are multi-sport athletes.

Madison Taylor, a catcher and outfielder, goes to Providence Grove in Randolph County and competes in tennis and volleyball, as well as softball.

Brittany Ireland is a corner infielder and catcher from Triton High, several hours east of Salisbury. She’s competed in basketball, golf and soccer.

Sommer Gray, an outfielder/infielder from Forbush High, is an exceptional volleyball player.

“We feel like all four of our recruits are girls who are good enough to play Division I,” Harris-Morgan said. “But when you’re a Division II coach, those are the kind of girls you need to get. When you’ve got some D-I talent, that makes coaching a whole lot easier.”

So the future is bright for Catawba softball.

As far as the present, this year’s freshmen class, including former Central Cabarrus star Riley Tucker, plus Pfeiffer transfer Kasey Rowden, have been added to a deep group of returners.