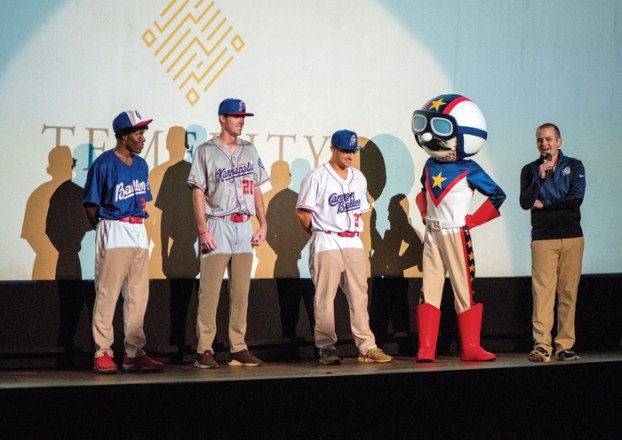 That date is when the newly renamed team will throw out the first pitch at its new downtown stadium.

Ahead of the first home game  the team and staff are transitioning from the Kannapolis Intimidators Stadium off of Moose Road to the Kannapolis Sports & Entertainment Venue.

The Cannon Ballers hope to start their season off better than they did on April 8, 1995, when the team, then the Piedmont Phillies, started at a newly built stadium. That day, attendees had to use portable bathrooms. The concession stands, locker rooms and staff offices weren’t completed until later in the season.

Vince Marcucci, assistant general manager of the Cannon Ballers, said the ballpark construction is 85% completed. This opening will be different, Marcucci said.

“It will be the best entertainment experience for our fans,” he said.

There may be things that come up as the stadium opens, but the ballpark will be a clean, family-friendly, safe environment, he said. The Cannon Ballers are set on providing the best place for community-focused, affordable family-fun, he said. The stadium will have a video board and a downtown view.

Surrounding the ballpark will be new businesses — some of which have already opened their doors, including Old Armor Beer Company.

“We’re really excited to be the catalyst for downtown Kannapolis,” Marcucci said.

Until game day, the Cannon Ballers will continue to prepare and celebrate the upcoming season. This month, the team will have the grand opening of their front office at the Kannapolis Sports & Entertainment Venue. Group tickets will go on sale. The team’s mascot will be named, too.

The Cannon Ballers hope to create a foundation to expand their charitable work, not just be a baseball team, Marcucci said. The team will be partnering with the community and workforce development programs to give young adults experiences. That could include being in the kitchen to learn about the culinary world or in the kids zone to learn about child care. The Cannon Ballers will continue to give people their first job and continue creating lifelong memories, Marcucci said.

On April 16, the Cannon Ballers will take on the West Virginia Power.

Who would play you in a movie?: 1980s Burt Reynolds for his role in Cannonball Run and his fantastic mustache that looks oddly familiar to our new mascot.
What would you want for your last meal?: The ballpark classics: hot dog, cracker jacks, popcorn, nachos and an ice-cold Pepsi.
What is one thing the Rowan County community should focus on for 2020?: A new fan entertainment experience like they’ve never seen before in our state-of-the-art ballpark.
Who will you be watching in 2020?: “The City of Kannapolis. The City has provided amazing new amenities in Downtown Kannapolis for their residents and other families living in our region. This summer we are excited to watch the City become a vibrant destination for tourism and entertainment as people flock to the newly revitalized West Avenue streetscape.”
What is your reaction to being named as one of the “10 to Watch’?: “Honored and humbled. We are honored to be a part of the “10 to Watch” in 2020 and humbled to represent the people in our community and region. Without our fans and the people who support this team, we would be nothing. In 2020, we look forward to creating experiences and memories that will last a lifetime.”
You Might Like

By Shavonne Walker shavonne.walker@salisburypost.com Tina Foxx Wallace says her aim has been to carry the torch that was held for... read more