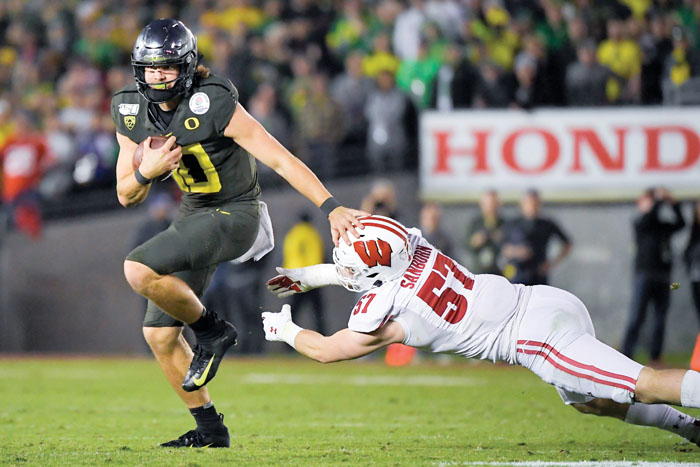 ORLANDO, Fla. (AP) — Jerry Jeudy could have sat out Alabama’s bowl game and still almost certainly would have been a first-round draft pick.

He played instead — and if this was his finale, his stock likely soared.

“I’ve played football all my life,” said Jeudy, the junior who was the game’s MVP pick. “I couldn’t just sit out there and watch my team play. … I love playing football, so I just came out here and competed with my brothers.”

Jones connected with Jeudy for an 85-yard score on Alabama’s first snap, DeVonta Smith and Miller Forristall added touchdown grabs in the second half for the Crimson Tide (11-2), which trailed 16-14 at the break. Najee Harris ran for 136 yards and two touchdowns for Alabama.

Jeudy finished with six catches for 204 yards. His previous career-high for yards was 147 set last season against Missouri, and the Alabama bowl record had stood for more than a half-century — Ray Perkins had 178 yards against Nebraska in the 1967 Sugar Bowl.

“Certainly, he used this opportunity to showcase his ability so it probably even enhanced his opportunities at the next level,” said Alabama coach Nick Saban, whose team outscored Michigan 21-0 after halftime. “Very, very proud of our team.”

Jones — who took over as Alabama’s starter when Tua Tagovailoa was lost for the season with an injury in November — completed 16 of 25 passes for 327 yards.

Shea Patterson completed 17 of 37 passes for 233 yards and a touchdown for Michigan (9-4), which dropped its fourth consecutive bowl game. Quinn Nordin kicked three field goals for the Wolverines, including a school-record-tying 57-yarder to end the first half and give Michigan the lead.

“It was a hard-fought game,” Michigan coach Jim Harbaugh said. “Congratulations to Alabama. I thought both teams played extremely hard.”

The Crimson Tide had two touchdown drives of 90 seconds or less — Jeudy’s score on Alabama’s first play and a long go-ahead touchdown grab by Smith early in the third quarter. They were quick-strike all season long, with 22 TD drives taking 1:30 or less and 38 TDs coming in 2:00 or less.

And the last of those was the one that put this game away for Alabama with 10:01 remaining.

Facing 3rd-and-11 from its own 8, Jones connected with Jeudy for 14 yards. On the next snap, Jones and Jeudy hooked up for 58 more yards. And the next snap was a 20-yard scoring pass to a wide-open Forristall.

Michigan: The Wolverines have dropped 16 straight road or neutral-site games against teams ranked No. 15 or higher in the AP poll, including all 10 under Harbaugh. The last time the Wolverines won such a game was Jan. 3, 2012 over then-No. 11 Virginia Tech.

Alabama: It was the 12th bowl or playoff-game win for Saban. That tied him with Paul “Bear” Bryant for the most in school history. And the Crimson Tide won their 27th consecutive game when allowing less than 40 points.

Alabama WR Henry Ruggs III — a 2020 first-round draft possibility if he skips his senior season — took a shot to the head with 9:30 left in the third quarter and was placed into the concussion protocol. The Crimson Tide had only two players skip the bowl game for draft preparation, cornerback Trevon Diggs and linebacker Terrell Lewis. Harris was another who might jump to the NFL who elected to play for Alabama.

Alabama should stay in the top 10 for the 76th consecutive edition of the AP Top 25, moving into a tie for the fifth-longest streak in poll history.

TAMPA, Fla. (AP) — Tyler Johnson had 12 receptions for 204 yards and two touchdowns Wednesday to become Minnesota’s career receiving leader and propel the 16th-ranked Gophers to a 31-24 victory over No. 9 Auburn in the Outback Bowl.

Johnson broke Eric Decker’s school record for receiving yards on his second catch of the day and became Minnesota’s all-time leader for scoring receptions on a one-handed, 2-yard TD catch that put the Gophers (11-2) up 24-17 at halftime. His 73-yard catch-and-run put his team ahead for good early in the fourth quarter.

Minnesota, which began the season with nine straight victories before losing two of its last three to Big Ten rivals Iowa and Wisconsin, finished with more than 10 wins for the first time since 1904. Auburn (9-4) concluded a season in which all four of its losses came against opponents ranked in the Top 25.

Tanner Morgan completed 19 of 29 passes for 278 yards, one interception and both of the TDs to Johnson, who finished with 3,305 receiving yards and 33 TD catches in his career. Receiver Seth Green tossed a 1-yard touchdown pass to Bryce Witham on fourth-and-inches midway through the second quarter.

Noah Igbinoghene, who mother and father were both Olympic track and field athletes in Nigeria, returned a kickoff 96 yards for Auburn’s first touchdown. Bo Nix threw a 37-yard TD pass to Sal Cannella and JaTarvious Whitlow scored 3-yard run that made it 24-24 heading into the fourth quarter.

Morgan broke the tie with his second TD throw to Johnson, who posted the 16th 100-yard game of his career and caught at least one TD pass for the seventh straight game, tying a another school record.

The Gophers dominated on the ground, too, outrushing Auburn 215 yards to 56. Mohamed Ibrahim ran for 140 yards on 20 carries, and Rodney Smith finished with 69 on 16 attempts.

Auburn: The Tigers finished the season with two victories against teams that entered the bowls in the AP top-10 in Oregon and Alabama and lost to Florida, Georgia and LSU by a combined 21 points.

Minnesota: Playing in a New Year’s Day game for just the second time since making back-to-back trips to the Rose Bowl during the 1960 and 1961 season, the Gophers showed their resurgence under Fleck isn’t a fluke.

PASADENA, Calif. (AP) — Justin Herbert scored his third rushing touchdown of the 106th Rose Bowl on a thrilling 30-yard run with 7:41 to play Wednesday night, and No. 7 Oregon held off No. 11 Wisconsin 28-27 to win its third straight trip to the Granddaddy of Them All.

Brady Breeze returned a fumble 31 yards for an early touchdown for the Ducks (12-2). Herbert then made his go-ahead rambling run on the next snap after Breeze forced another fumble in yet another frenetic edition of this venerated bowl game.

Oregon held on to cap its Pac-12 championship season with its 12th win in 13 games. The Ducks celebrated on the famous turf amid confetti and cheers after the fourth Rose Bowl victory in school history.

Aron Cruickshank returned an early kickoff 95 yards for a touchdown for the Big Ten runner-up Badgers (10-4), but they lost in their fourth consecutive trip to Pasadena over the last 10 years.

Herbert passed for just 138 yards without a touchdown in his collegiate finale, and Oregon managed just 204 yards of offense. Instead, the Ducks improbably relied on the legs of their 6-foot-6 quarterback to grind out a landmark win for second-year coach Mario Cristobal.

Herbert had only 10 rushing touchdowns in the first 41 starts of his career, but he turned into a big-play machine on the ground. After he scored on runs of 4 and 5 yards in the first half, stiff-arming Wisconsin defenders on both runs, he rambled through the defense for the go-ahead, 30-yard score in what’s sure to be the signature moment of the four-year starter’s career.

Herbert eventually got back to what he normally does best: He made a key 12-yard throw to Mycah Pittman for a first down with 1:51 to play, and his 28-yard throw to Juwan Johnson with 1:03 left allowed the Ducks to run out the clock.

Jonathan Taylor rushed for 94 yards and Quintez Cephus caught seven passes for 59 yards and a score, but Wisconsin quarterback Jack Coan’s offense couldn’t capitalize on its whopping advantages in time of possession (38:03-21:57) and total yards (322-204).

After kickoff in 68-degree temperatures on another postcard-perfect New Year’s Day in Pasadena, the Ducks marched 75 yards on their opening drive. Herbert ran 4 yards for a TD, stiff-arming a defender on the way in.

But Cruickshank took the ensuing kick straight down the Oregon sideline for an electrifying score and a rarity in the Rose Bowl. The kickoff return was just the second for a touchdown in Wisconsin’s lengthy bowl history, but just the third in 106 Rose Bowls — and the first in 17 years.

Herbert then threw his fifth interception in six games after throwing just two in the Ducks’ previous 10 games, and Wisconsin went ahead 10-7 despite having 1 yard of offense.

Both teams traded missed scoring opportunities before Coan’s first interception got Oregon in business. Herbert ran 5 yards for his second score, again stiff-arming a Wisconsin defender to the ground.

Wisconsin replied with a gritty drive right before halftime, with Cephus making an 11-yard TD catch with 11 seconds left to put the Badgers up 17-14.

Oregon got a break right after the half when Wisconsin punter Anthony Lotti caught the snap but dropped the ball on the ground instead of kicking it under pressure. Breeze alertly picked it up and sprinted for the go-ahead score.

The Badgers responded with a drive capped by Mason Stokke’s 2-yard scoring run, and they went up 27-21 on a field goal with 12:09 to play.

But Breeze forced another fumble by Wisconsin’s Danny Davis with a big hit, and Herbert took the next snap on his 30-yard TD run.

Wisconsin: The Badgers will kick themselves for years after every missed opportunity in this game. The offense couldn’t finish enough drives, while the defense appeared ready for everything except Herbert’s elusiveness. They can build on this resilient season, but their Rose Bowl drought will stretch beyond 20 years.

Oregon: Herbert could be sorely missed next season, both for his all-around skill set and his incredible poise under pressure. But the Ducks are once again ascendant, with this victory punctuating a two-year rise under Cristobal that puts them back on top of the West Coast and beyond.

Wisconsin: After starting next season with a visit from up-and-coming Indiana, Southern Illinois and Appalachian State will visit Camp Randall.

Oregon: With a new starting quarterback, the Pac-12 title defense season starts Sept. 5 with a doozy: A visit from North Dakota State, the FCS powerhouse currently 15-0 on its way to the national title game. A week later, the Ducks host Ohio State.