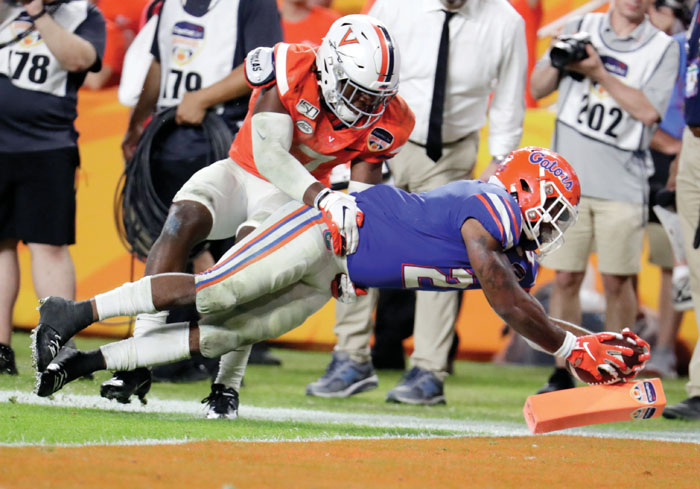 Florida running back Lamical Perine (2) runs to the one yard line as Virginia safety Chris Moore defends during the second half of the Orange Bowl NCAA college football game between Florida and Virginia, Monday, Dec. 30, 2019, in Miami Gardens, Fla. (AP Photo/Lynne Sladky)

MIAMI GARDENS, Fla. (AP) — Lamical Perine scored on a 61-yard run in the opening minute and didn’t stop after that, totaling 181 yards rushing and receiving with three touchdowns Monday to help No. 6 Florida beat Virginia 36-28 in the Orange Bowl.
Perine carried 13 times for a career-high 138 yards rushing at the end of a so-so senior season.
But Perine was too quick and speedy for the Cavaliers, as his dash through their secondary on the first series showed. He also scored on a 10-yard run, caught a 16-yard touchdown pass from Kyle Trask and was chosen the game’s most valuable player.
The win means Florida (11-2), led by second-year coach Dan Mullen, will likely finish in the Top Ten in consecutive seasons for the first time since 2008-09. The Cavaliers (9-5) lost their final two games, but still posted their highest win total since 2007.
Trask capped a storybook junior season by throwing for 305 yards.
Florida totaled 549 yards, including a season-high 244 rushing, and didn’t punt until midway through the third quarter.
The Cavaliers’ offense tried valiantly to keep up. Bryce Perkins threw for 323 yards and four scores.
MUSIC CITY BOWL
LOUISVILLE 38, MISSISSIPPI STATE 28
NASHVILLE, Tenn. (AP) — Micale Cunningham threw for 279 yards and two touchdowns and ran for 81 more, and Louisville capped coach Scott Satterfield’s debut season by beating Mississippi State in the Music City Bowl.
The Cardinals (8-5) rallied from a 14-point deficit by scoring 31 straight to finish their big turnaround from 2-10 last season. Louisville also finally beat Mississippi State on the field for the first time in six tries, though the series now is tied 3-3 thanks to a pair of forfeits by the Bulldogs in the 1970s.
Mississippi State (6-7) had been trying to finish the season with a three-game winning streak for the first time since 2013 and only the third time since the end of World War II. Instead, the Bulldogs go home having lost a bowl game in each of coach Joe Moorhead’s two seasons.
The Cardinals had four sacks and recovered two fumbles, one returned 31 yards for a TD by safety Khane Pass.
Javian Hawkins led Louisville with 105 yards rushing, and he ran for a TD late. The Cardinals outgained Mississippi State 510-366.
REDBOX BOWL
CALIFORNIA 35, ILLINOIS 20
SANTA CLARA, Calif. (AP) — Chase Garbers threw four touchdown passes and ran for another score, leading California over Illinois in the Redbox Bowl.
Christopher Brown Jr. ran for 120 yards on 20 carries, and Makai Polk caught five passes for a season-high 105 yards as Cal (8-5) won its first bowl game since 2015.
Brandon Peters passed for 273 yards and one touchdown for Illinois (6-7) in his return after sitting out the regular-season finale with a concussion. Peters, who was shaken up again after diving out of bounds following a scramble late in the fourth quarter, completed 22 of 37 passes and added a team-high 68 rushing yards.
Garbers, who had been in and out of the lineup all season because of a shoulder injury, got going after being sacked on the first play from scrimmage and throwing an incomplete pass on the second. The offensive MVP of the game, Garbers completed 22 of 31 passes for 272 yards with TD passes of 4, 3, 2 and 6 yards. He also scored on quarterback sneak from the 1 early in the second quarter while helping the Bears set a season-high for scoring.
FIRST RESPONDER BOWL
WESTERN KENTUCKY 23, WESTERN MICHIGAN 20
DALLAS (AP) — Freshman Cory Munson kicked a career-long 52-yard field goal with no time left after a rules review to give Western Kentucky a victory over Western Michigan in the First Responder Bowl.
The Hilltoppers (9-4) drove 36 yards in 27 seconds before Munson kicked his third field goal in four tries. The clock had expired and Munson was given the final play after a five-yard defensive substitution penalty against the Broncos for having 12 players on the field. Munson had tied the score at 20 on a 31-yarder with 1:36 to play. He also kicked a 26-yarder and missed from 29.
Thiago Kapps’ 20-yard field goal with 4:58 to play gave Western Michigan (7-6) a 20-17 lead.
Western Kentucky’s Lucky Jackson had 17 catches for 148 yards and was named the game’s most valuable player.
___
More AP college football coverage: https://apnews.com/Collegefootball and https://twitter.com/AP_Top25