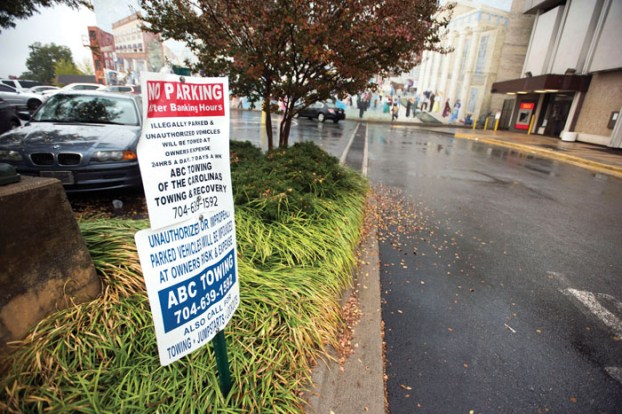 Signs warn that vehicles may be towed in the parking lot behind the former Wells Fargo Bank on East Fisher Street. Jon C. Lakey/Salisbury Post

Editorial: Yes, there is a parking problem in downtown

Regardless of whether it was right at the time, a critical point of a parking study presented to the Salisbury City Council now misses the mark for accuracy.

Believe it or not, Salisbury has a parking problem. It is not “perceived,” and that’s proven by the fact that city staff have dedicated time to finding a resolution.

But in October, Wayne Robinson, of VHB Engineering, told the Salisbury City Council, “You do not have a parking problem based on the numbers. The numbers don’t show a parking issue. The issue is everyone wants to park where they want to park, when they want to park there.”

That assessment may have been fair at the time and there may still be parking spots available on a regular basis in inconvenient spots, but the statement has not aged well.

Cars regularly are towed from one of the city’s most convenient lots to popular businesses — across from Go Burrito at the intersection of Church and Fisher streets — with owners returning from an evening downtown to find their vehicle missing. Salisburians as well as visitors from other cities and towns have been victims. The small, forgettable signs at the entrance to the lot do not do enough to warn parkers.

Cars are being towed as a result of the early 2019 closure of Wells Fargo’s downtown Salisbury location. The bank apparently chose to start towing cars “after banking hours” following its closure. That meant a lot long been used by downtown visitors of all types, and especially those frequenting Go Burrito, was now off limits after 5 p.m. Strangely, cars not doing business at the building seem to be safe during normal business hours.

Meanwhile, a large number of spaces were lost when construction started on Bell Tower Green Park — something many Salisburians knew about but others only paid attention to when they needed to find other spaces to park — perhaps in the Wells Fargo lot.

It was good to see earlier this month that city officials are working with Wells Fargo and a yet-to-be-named future owner on signs warning would-be parkers and future plans.

But the fact remains: there’s a parking problem in downtown Salisbury.

It’s not a capacity issue; there are spots elsewhere in downtown that are less convenient and available. Rather, a property owner has artificially limited supply in one of the city’s popular blocks and people have suffered financially.

When a deal is finalized with the Wells Fargo building’s new owner, we hope he or she will be willing to make their lot available after hours or, at a minimum, charge for parking rather than resorting to towing right away.

Quotes of the week: ‘Seeds of possibility’

“We are working to plant those seeds of possibility, helping them to understand it is possible to do the things... read more