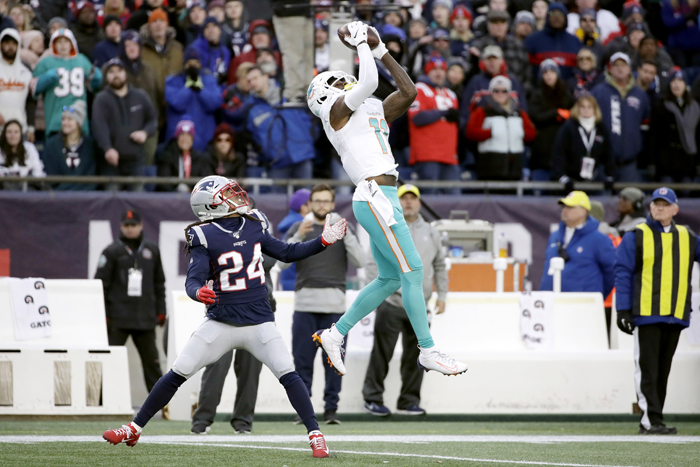 By The Associated Press
FOXBOROUGH, Mass. — Miami dropped defending Super Bowl champion New England into the wild-card playoff round when Ryan Fitzpatrick tossed a 5-yard touchdown pass to tight end Mike Gesicki with 24 seconds remaining for a stunning 27-24 victory Sunday.
New England (12-4) will have to play in the opening weekend of the postseason for the first time since 2009. The Patriots never have made the Super Bowl while playing in the wild-card round.
The Patriots won their first eight games, the split the next eight, including the rarity of two losses at home.
It is the second straight season the Dolphins have denied the Patriots an unbeaten division record. They scored on a wild series of laterals on the final play in their second meeting last season, in Miami.
After trailing throughout the game, Tom Brady threw a 13-yard touchdown pass to James White to put New England in front 24-20 with 3:53 left. But Fitzpatrick, who finished 28 of 41 for 320 yards and a touchdown, was unflappable, leading Miami on a 13-play, 75-yard drive that included him recovering a fumbled snap, and completing a 24-yard pass to DeVante Parker for Miami (5-11).

CHIEFS 31, CHARGERS 21
KANSAS CITY, Mo. — Mecole Hardman returned a kickoff 104 yards for a touchdown, Damien Williams took a handoff 84 yards for another score, and the Chiefs leapfrogged New England for the No. 2 seed in the AFC and a first-round playoff bye.
The Chiefs (12-4) long ago clinched their fourth straight AFC West title, but they needed a win and an unlikely Dolphins victory over the Patriots to get a week off. And just as Williams punched into the end zone in the closing minutes for his second touchdown of the game, the Dolphins were scoring the go-ahead TD with 24 seconds left for their upset in Foxborough.
Now, the Patriots will have to play next weekend while the Chiefs set their sights on the divisional round of the playoffs.
The Chargers (5-11) made it stressful for Kansas City in the fourth quarter, though, driving for a touchdown that got them within 24-21 with 5:23 to go. But the Chiefs answered with an eight-play, 77-yard scoring drive that allowed them to wrap up their sixth straight win overall and 11th victory in 12 meetings with their longtime division rival.

PACKERS 23, LIONS 20
DETROIT — Mason Crosby kicked a 33-yard field goal as time expired, lifting the Packers to a first-round bye.
The Packers (13-3) fell behind by two touchdowns in the second quarter. They didn’t lead until Crosby made his second winning kick against Detroit this season.
The Lions (3-12-1) closed with nine straight losses for their longest losing streak in a season since going 0-16 in 2008.
Green Bay won despite Aaron Rodgers struggling to make accurate throws for much of the afternoon. Rodgers was 27 of 55 for 323 yards with two touchdowns and an interception. He made a short pass under pressure to Aaron Jones, who turned the clutch throw into a 31-yard reception to set up Crosby’s kick.
Jones ran for 100 yards on 25 carries and had 43 yards receiving. Davante Adams had seven receptions for 93 yards and a score.
There was a long moment of silence before the game for receiver Marvin Jones’ 6-month old son, who recently died. Jones, who was on the sideline with his family during the national anthem, went on injured reserve earlier this month.

BEARS 21, VIKINGS 19
MINNEAPOLIS — Eddy Piñeiro’s fourth field goal of the game for Chicago came from 22 yards with 10 seconds left with the Vikings resting their regulars for the playoffs.
Piñeiro, the latest attempt by the Bears (8-8) to solve their persistent kicking trouble, finished the season with 11 straight made field goals. Mitch Trubisky highlighted another unremarkable performance by hitting Riley Ridley for 34 yards on fourth-and-9 with 2:36 left from midfield to set up the winning kick.
David Montgomery had 23 carries for 113 yards and a touchdown to cap a strong rookie season and help the Bears beat the Vikings (10-6) for the fourth consecutive time. Chicago dodged what would have been a fifth losing record in six years, after winning the NFC North in 2018 in coach Matt Nagy’s debut.
Minnesota missed a third 11-win season in six years under coach Mike Zimmer, but he was far more concerned about taking a healthy team to the playoffs. The only drama in the building was the way the Green Bay-Detroit game was unfolding, with a significant impact on where the Vikings will play their first-round game.
Ifeadi Odenigbo strip-sacked Trubisky in the fourth quarter to pick up the ball and set up Dan Bailey’s fourth field goal for a brief lead for the Vikings, but a replay review negated what would have been Odenigbo’s second fumble return for a touchdown in three games after it was ruled that his knee was down after the recovery.

BENGALS 33, BROWNS 23
CINCINNATI — Andy Dalton threw for a touchdown and ran for another in his farewell as a franchise quarterback — a Joe Burrow banner in the upper deck reminded him what comes next — and the Bengals ended one of their most miserable seasons with a victory.
Ohio’s two professional football teams wrapped up another fruitless year together and set course for an offseason of potentially big changes.
The Bengals (2-14) matched the worst record in their 52-year history. They’ll pick first in the draft for the first time since 2003, when they also were coming off a 2-14 finish and chose franchise quarterback Carson Palmer.
Cleveland (6-10) was a chic Super Bowl pick with Baker Mayfield coming off a sensational rookie season and Odell Beckham Jr. adding star quality to the offense. Instead, the Browns significantly regressed under first-year coach Freddie Kitchens, raising questions whether he’ll get a second chance.
Dalton threw a 15-yard touchdown pass and scrambled 5 yards for another score in the Bengals’ highest-scoring first half of the season for a 20-16 lead. He finished 16 of 28 for 190 yards. Joe Mixon ran for a career-high 162 yards and a pair of touchdowns, topping 1,000 yards for the second straight year.

FALCONS 28, BUCCANEERS 22, OT
TAMPA, Fla. — Deion Jones intercepted Jameis Winston on the first play of overtime and returned the ball 28 yards for a touchdown.
Winston became the first Tampa Bay quarterback to pass for 5,000 yards in a season, but another non-playoff year ended on a sour note. The Falcons (7-9) tied the game with a field goal on the last play of regulation and won for the sixth time in eight games when Jones became the seventh opposing player to score on a pick-6 off Winston this season.
Matt Ryan completed 30 of 51 passes for 313 yards and one touchdown for the Falcons, who saved coach Dan Quinn’s job by rebounding from a 1-7 start to go 6-2 over the second half of the season. Atlanta will finish second in the NFC South despite posting a losing record for the second year in a row.
Winston threw for 201 yards, two touchdowns and two interceptions, hiking his NFL-leading total to 30. Ronald Jones II had the first 100-yard rushing performance and Breshad Perriman topped 100-yards receiving for the third straight week for the Bucs (7-9), who miss the playoffs for the 12th consecutive year.
Ryan only got the Falcons into the end zone once, throwing a 35-yard TD pass to a wide- open Ty Sambrailo, a 6-foot-5, 311-pound backup offensive tackle.

JETS 13, BILLS 6
ORCHARD PARK, N.Y. — Sam Darnold hit Jamison Crowder for a 1-yard touchdown pass in the fourth quarter, and New York avoided finishing its fourth consecutive season with double-digit losses in a win over Buffalo’s backups.
The Jets missed the playoffs for a ninth consecutive season, but finished at 7-9 under first-year coach Adam Gase for their best record since going 10-6 in 2015.
The playoff-bound Bills had very little to play for while resting most of their starters, including quarterback Josh Allen after the first quarter. Buffalo dropped to 10-6 — still its best finish since going 11-5 in 1999 — and entered the game already locked in as the AFC’s fifth seed.
The Bills will travel to play AFC South champion Houston Texans in the wild-card playoff round next weekend. The Texans were assured of the No. 4 seed after Kansas City defeated the Los Angeles Chargers.
___
More AP NFL: https://apnews.com/NFL and https://twitter.com/AP_NFL