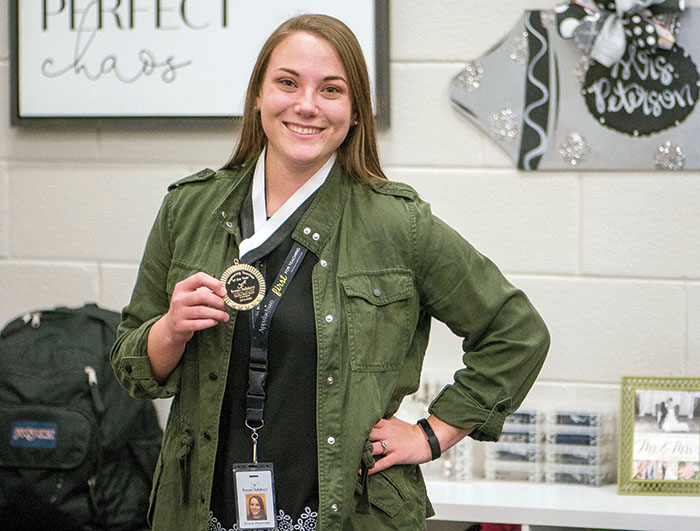 SALISBURY — As a child, Jessie Peterson, a triplet, tagged along to her dad’s band gigs with her siblings. Now, she’s a band director and the first Beginning Teacher of the Year for Rowan-Salisbury Schools.

Peterson, who works as band director at Corriher-Lipe Middle School, received the award earlier this year.

Susan Heaggans, director of Initially Licensed & Support Services, says the district reached out to principals to nominate beginning teachers who exhibited qualities to represent the system. Nominees then put together portfolios that included their philosophy of teaching, reflections, advice to other beginning teachers and the steps they take to make an environment welcoming to all students.

Peterson began playing bass guitar at age 8 and took up flute in sixth grade. She played guitar in jazz band and flute in as many ensembles as she could find. And she always knew she wanted to be a band director.

Peterson’s middle school band director was “that person you wanted to go to for advice,” she says. “He was always upbeat; he was that person you went to with good news.” He inspired her to pursue teaching, too.

As a freshman, she marched in the New Year’s Day parade in London, England. As a sophomore at Appalachian State University, she decided to apply for drum major and was selected. She directed the band for two bowl games, served as student director for the basketball team’s band and went to a conference tournament in New Orleans.

Band class is different from other classes, she says. By nature, there must be chaos.

“The kids have to have the chaos aspect to figure out who they are and what their talent is,” she says. “Everyone has his own chaos. For us, a lot of things are different than a regular classroom.”

To gain the students’ attention, Peterson calls out, “Marco!” and the students are to respond with, “Polo!” If the noise is too loud to be heard, she uses a visual cue, quietly raising her hand. As students notice her uplifted hand, they raise their hands in silence, as well. She says it works well.

“You can’t stop and manage the class,” she says. “You have to keep the flow going. You don’t give them a chance to be bored.”

Peterson says she was lucky to learn this as she was drum major in college. As a student teacher, her cooperating teacher was a great role model.

“All his transitions were so smooth,” she says. “He knew his program inside and out. A lot of it is hands-on. Every student is different; every class is different.”

Peterson’s classes are not divided by grade level but by type of instrument. Her sixth graders who may have never held an instrument before may be grouped with more experienced seventh-graders but not with eighth-graders who are in their third year of band.

Corriher-Lipe is a Title One school, meaning it has a high margin of poverty. Most students use school-owned instruments. Some band parents donate to support other students. Peterson says no student will be turned away because they can’t afford an instrument. She even finds monetary support for things like reeds and polo shirts.

The longest day yet, she says, happened last October when she learned her grandfather had died. She was up at 4 a.m. and got to school really early to prepare for the day. After teaching all day, she and her students went to South Rowan High School for Community Night, when the high school band students mentor the middle school band students at a football game.

She left at 10:30 that night to drive home to Winston-Salem and got a flat tire on the road. After that, she drove to her parents’ home to begin the 15-hour trip to Vermont for the funeral.

With a laugh, she says the second longest day is happier. In April she took her students to the Carowinds Music Festival in pouring rain. Students arrived at school at about 6:30 a.m. and boarded three activity buses. About 15 parents’ cars followed.

“Raincoats didn’t help at all,” she laughs. “Everyone was drenched, head to toe. … My students performed their hearts out. The beginners got an Excellent, and advanced players got a Superior. The rain finally stopped when it was time for them to go ride the rides. We got home about 6:30 p.m.”

Students recognize her youth, she says, but that’s not all bad.

“It wasn’t so long ago that I was in middle school, myself,” she says. “I listen to the same music. I watch the same TV shows. I can relate. Culturally, I’m more similar to my students than to many other teachers.”

Peterson says she’s had students who don’t feel accepted by family members but have a sense of belonging in band.

“When they say, ‘I want to be a band teacher one day,’ that’s nice,” she says. “I don’t care if you can play every note perfectly. I care that you learned and felt you were a part of something. I’ve been fortunate to have them say that.”

Her advice to beginning teachers: “Everything will be a challenge. You have to be flexible. Nothing will go perfectly. Nothing will even go as planned. Focus on process rather than product. The way the students learn is more important that what they learn. Finally, take time for yourself.”

Peterson says the district has a great beginning teacher program, and her mentor, Kelly Nelson, who teaches chorus, has been invaluable.

Her biggest challenge, Peterson says, has been adapting instruction to the individual needs of each student.

“You have to build relationships with each student. It takes time and effort and a lot of energy. Once you have that relationship built, the magic happens — all while you’re getting used to procedures. But you’ve got to know each student to make a difference.”

The Corriher-Lipe community is a close one, she says, and she quickly learned if she needs something, she just has to ask. If someone can’t help her out, they’ll find someone who can.

“Usually in band directing, you are the only one, and it can be isolating. But here, it’s a strong community,” Peterson said.

Peterson met her husband the first week of college. He was a senior. They sat across the aisle in marching band. Two years later, he proposed to her on the field at Appalachian State, and they married a year later as she was completing the first week of student teaching.

Today, she’s working on her master’s degree and hopes to complete it before she’s 25. She just finished her first semester with a 4.0 GPA.

Although her husband studied music in college, he now works at the State Employee’s Credit Union. He’s pursuing his master’s in business administration. Because he was involved in music in school, Peterson said he understands her long hours.

So, what’s next for a young teacher who finished college early, got engaged, student-taught, married, started a full-time job, won the highest honor available and is working to earn a master’s degree by age 25?

“In 2021 I will graduate with my master’s of music degree in music education,” she says, “and then will pursue my national board certification the following year. I plan to then start my family, and eventually go back to school to purse my Ph.D. in music education and fulfill my dream of joining a music education faculty at a college or university to help prepare future music educators.”