‘Know how much you care’: Two-time teacher of the year Theresa Pierce reflects on career 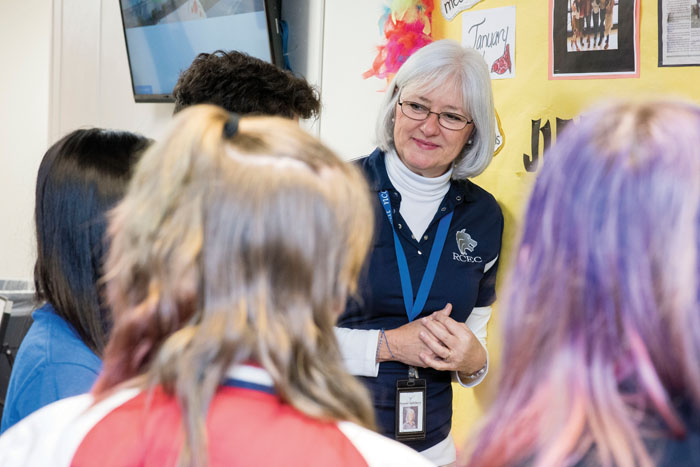 “I have a wonderful life,” Pierce said.

When Pierce, a history teacher at Rowan Early College, was among the top five nominees for Teacher of the Year, she was directed to produce a video for the competition. With her students already out of school for the year, she was at a loss as to what to film.

One of her students, Taron Lily, told her, “No worries. I’ll make a video for you.”

In the video, Taron called Pierce her teacher a mentor, friend for life, advocate, grandmother and once-in-a-lifetime leader. Taron spoke of her smile and her encouragement and said she had made a lifelong impact on her and many other students.

And for the second time in her career, Pierce this year was named the Rowan-Salisbury Schools Teacher of the Year.

Pierce’s parents were successful business owners, she says, owning and running a drive-in restaurant. They invested some of their hard-earned cash into a supper club, but it burned down before insurance papers were complete. They filed bankruptcy and moved to Kinston, in eastern North Carolina, to work at Dupont.

“I was treated differently because my parents worked in a factory,” she says. “Because of that, equity is very important to me. I keep pencils, food, snacks, safety pins, for my students. They call me grandmother.

“It is a big deal to me. We either let things define us or propel us to a new level. When you feel inequity in anything, you can be angry, but then you need to say, ‘Where is this going to propel me?’”

Her students know she’s there for them, Pierce says, and will ask for what they need. She says her friends and church assist in helping her students. They don’t want recognition, she says, but want to be there for the students.

She smiles as she quotes her husband, quoting former President Harry S. Truman: “A lot can be accomplished if you don’t care who gets the credit.”

Another point for equity is serving her students in the way they individually need to learn. If one student needs something printed out, but another needs to see it on the computer, she accommodates. If a student needs a trifold board for a project, it appears.

“Kids don’t care how much you know until they know how much you care,” Pierce says. “Once they know you care, they are yours. It sounds easy, but it’s not. But it definitely helps.”

On classroom management, she says there is almost always a reason that child is misbehaving. If a teacher can find out that reason, he or she can help them maneuver the pitfalls of life. You win them over, she says, and get them on your side.

Pierce student-taught under Cauley Bryant at Bynum Elementary School in Kinston during the early years of integration.

“She modeled teaching,” she says. “She did this transitional thing I call, ‘I do, I do with you, you do.’ She was amazing. The love she had for those kids – I’ll never forget she was so inclusive. There was this huge family feel. Everyone should have someone like her to get them started.”

Carolyn Hartung was another teacher with whom she taught.

“She taught me to get parents won over so they would want to be at school. She’s still to this day one of my dearest friends,” Pierce said. “She is all about the kids. She handled discipline so well the kids wanted to do well for her.”

“Once you start collecting something, it gets a life of its own,” she says, laughing. The collection has grown from one costume in a closet to having a closet of its own. She’s performed at the Old Stone House, the history museum and the Transportation Museum.

Although Pierce taught history for eight years, she started as a reading teacher and says that’s what she is at her core.

“Throughout history, kings have controlled people because they kept them illiterate,” Pierce said. “We must do everything in our power to preserve kindergarten through fifth grade so teachers can teach students to read. It controls their life.

“Literacy is number one. No. 2 is hands-on. That’s how I learn, and how I teach. Teach them to be storytellers, which helps their fluency. Teach them to read a passage and pull the answers out, to dig deeper, that’s where comprehension happens. Eighty percent of comprehension is finding the answers right there, and about twenty percent is inference. They don’t even know I’m teaching them reading skills. It happens organically.”

She focuses on phonemic awareness, phonics and strong vocabulary. She says it’s critical to read fluently, read poetry and songs, read a lot, read often and do it for the joy of reading. It’s a theme throughout her career.

Another focus of her work is prescriptive education.

A child will keep making the same mistake, she says, if you don’t communicate to him or her exactly what that mistake is. She learned this from personal experience. When writing to the end of a line on the page, a young Pierce hyphenated any part of the word, not breaking by syllable. Teachers merely circled the mistake in red and counted off the grade, she says, but never told her why. She finally figured it out on her own and wonders why no one ever explained it to her. Today, she tries to address issues directly with students to help them avoid her frustration.

Students are selected to attend Rowan Early College by lottery. Staff ensures that students are selected from all four corners of the county, Pierce says, and that the demographics of the school accurately reflect the demographics of the county. Roughly 80% must be first-generation college students. She says the diversity of the school is its strength. The music at prom is all over the map, she laughs, and says that’s a great thing.

Pierce attended Lenoir Community College and completed her bachelor’s degree at East Carolina University. She earned her master’s at Catawba at age 50 and her National Board Certification at age 53. She works hard to keep learning, looking each year for continuing education opportunities to take over the summer.

She didn’t know much about Asian immigration, for example, so she applied to the National Endowment for the Humanities and got a grant to go to Seattle to learn about internment camps and Angel Island.

She learned about Ellis Island in New York City, too.

The first time she was named Teacher of the Year, she went to Denmark and learned about the environment, Vikings and Danish education.

Pierce also serves as the advisor for the Junior Civitan Club at her school and is proud that one-third of the students are Junior Civitans. She explains to students that colleges are looking for well-rounded applicants with community service as well as good grades. Students help at the Old Stone House, Transportation Museum and in Salisbury’s Blockwork program, which makes over a block every October.

She enjoys seeing students hold a tool they’ve never seen before and learn to be proficient in its use.

Pierce has been married 39 years and has three adult children, all local. Her five grandchildren are the “lights of my life.”

While she’s honored to be named Teacher of the Year a second time, she looks to the next generation of teachers for the future.

“There are so many amazing teachers I’d like to see elevated. I’m honored, believe you me, but it’s hard to be in the limelight,” Pierce said. “I want other, younger teachers to get the limelight.”

She gazes into the distance when considering her memories.

She recalls a child at Granite Quarry Elementary School who often came to school unwashed, in unclean clothing. At Christmas, he proudly presented her with a wooden cheese box with carolers painted on it.

“This is lovely,” she exclaimed. “Please tell me the story about it.”

He was quite excited.

“I climbed in the dumpster behind the grocery and took it home and painted it,” the student said.

Pierce still has it.

“I received other gifts that year, but this is the only one I remember. It was the most heartfelt gift. I hope and pray he made it in life,” she said.

Being a teacher, Pierce said has “been the best ride ever.”

“I can’t imagine ever doing anything else,” she said.