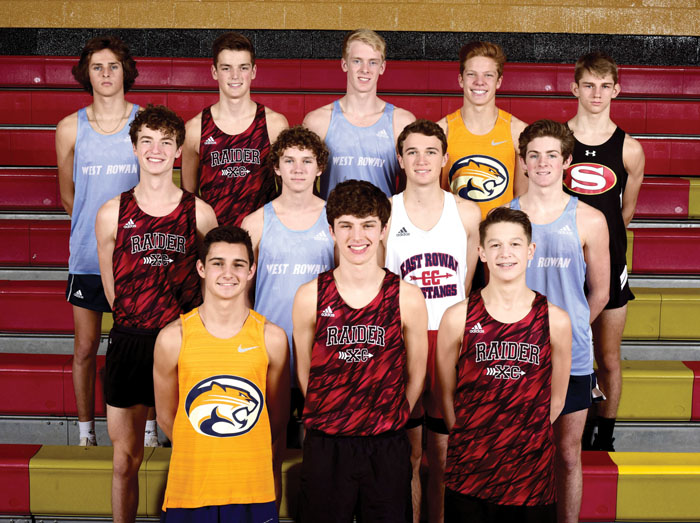 But the team concept is never far from his thoughts.

Making himself better in order to make South Rowan’s team better has been an approach that’s helped propel Julian to be where he is now. Being a team member always provides superior motivation than merely being a solo artist intent on slicing another half-second off the ol’ PR.

“County champions, conference champions, top 10 in the state,” Julian said. “We accomplished every team goal we could realistically shoot for, and I’m so proud of this team. We’d lost our No. 2 runner (Ari Moya),  but we still won our conference, and the CCC (Central Carolina Conference) is the toughest 2A in the state.”

This is Julian’s second Rowan County Runner of the Year Award. It’s also the second straight year he’s been county champion, so you’ve probably heard of him.

Even when he was a freshman, he was runner-up in the county cross county meet to East Rowan’s senior star Sean Incardona and he was winning the 3200 in the county track meet. For a cross country runner, he’s relatively well-known. He might be his school’s most famous male athlete. More people who follow high school sports around the county probably can identify Julian than South’s quarterback or South’s cleanup hitter or South’s leading basketball scorer.

Raising the profile of cross country is part of Julian’s quest. When you get up before the roosters and pour your sweat, blood and dreams into something, it’s no longer a minor sport in any way shape or form.

You’ve heard about his gene pool before, but it’s important to know that both his parents (Scott and Rebekah) have been outstanding runners. So were several more family members. Of course, heredity is be a blade with two edges. Bloodlines like Julian has mean he has a natural head start on the field, but they also bring increased expectations.

No one ever expected him to be average, but it took some time for him to start living up to great expectations.

“The beginning was rough for me, really,” Noah said. “I was like 9 when I started with it, but it took until the eighth grade before I started really finding myself as a runner. My little brother (Eli) who is three years younger, it came more easily to him. He found himself a lot quicker.”

Former East Rowan Mustangs Scott Julian and Rebekah Frick Julian are South’s cross country coaches, and the entire thing has become a family affair. It will expand to include Eli Julian next season. He has a good chance to break county distance records for middle schoolers this spring. He’ll be a key runner for South next fall as a freshman.

“It will be an interesting dynamic having both of the brothers on the team.” said Scott Julian,  the Post’s boys cross country Coach of the Year. “They get along almost all of the time —  fortunately. The last thing  you want is to turn around and see two of your team members wrestling each other.”

The Julians also found room in their hearts and their home for all the other Raiders. As good as Noah was, South’s season wouldn’t have been special without Ian Waugh, Landon Cromer, Nolan Miller, Trent Rivers, Corey Snodgrass and Tyler Sheets backing him up.

When South claimed its second straight county championship at Dan Nicholas Park, South put four runners — Julian, Waugh, Cromer and Miller — in the top six. In 2017, South was fifth out of the five schools that posted team scores at the county meet. That say something about how far the program has come in a short time.

When South won the county in 2018, that’s pretty much where it ended. The team peaked early. But in 2019, South kept climbing new hills. Winning the Central Carolina Conference Championships at Salisbury Community Park was a strong statement. The CCC is loaded in boys cross country. Four of the top five teams in the 2A Midwest Regional came from the CCC.

South went on from there to post a strong third in the regional and a 10th-place finish in the state.

“We had a breakthrough season,” Scott Julian said. “We set some high goals and accomplished a lot. The first conference championship since 1980. The first time qualifying for state as a team.”

Noah, of course, led the way.

“Noah was very focused all year, got his times down and was a good team leader,” Scott said. “There’s some advantage in coaching your child. Noah is very disciplined and does the right things, and it’s not like he needs a lot of supervision, but it’s still nice to be able to make sure he’s getting to bed on time and getting his sleep and we can make sure he’s eating right. You can’t keep track of all your runners like that.”

Noah, a thoughtful guy who has grown some in the last year to 5-foot-11, is thin and fit at 130 pounds. He ran 16:47 in the county meet at Dan Nicholas Park, 12 seconds faster than the winning time he posted as a sophomore.

On a tough layout at Salisbury Community Park, he  clocked a winning time of 17:03.

He ran 16:54 for third individually in the regional held in Dobson. He was 18th in the state meet in Kernersville in 16:38.

His fastest time  — a career best — came in October’s Wendy’s Invitational held on a course that he loves — Charlotte’s McAlpine Greenway. He ran 16:33 in that one to place third in a field of 242 runners.

Noah’s driving goal is to run in college. It’s one that he’s going to accomplish.

He’ll probably be a track/cross country guy.  Not every athlete can carry the freedom of cross country running onto the more confined conditions of the track, but Noah excels at both.

Noah has been strong enough that he’s also pushed the rest of the county, not just his teammates.

Carson senior Zac Barbee was the North Piedmont Conference champion. Barbee might not have gotten as fast as he did if he hadn’t been chasing Julian the last three years.

“I came in second to him a lot,” Barbee said with a laugh. “There’s no doubt that just trying to run with him made me better.”

West Rowan’s deep team also turned in a strong season and won the NPC team championship under the leadership of coach Scott Foster, the conference coach of the year.

With this historic season in the books,  South now looks to the future and  starts working toward defending hard-earned titles.

“We’ll bring back a good core group of runners,” Scott Julian said. “And we’ll have a strong mission.”

The all-county cross country team was determined by the top 12 finishers in the county meet in late September.

The Post’s runner of the year, which takes the whole body of work for a season into account, is usually, but not always, the county champion.