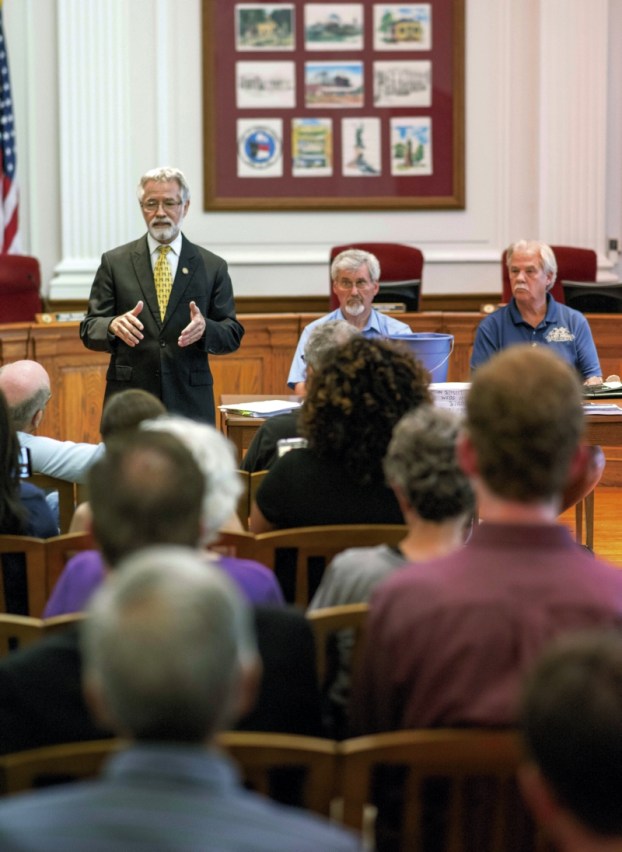 Harry Warren met with constituents in a town hall meeting in 2017 in the Rowan County Board of Commissioners Chambers. Jon C. Lakey/Salisbury Post

It’s election season again in Rowan County, and the most intriguing local race in 2020 will be on November’s general election ballot.

That race — Al Heggins vs. Rep. Harry Warren in a battle for the 76th House District — will pit a former mayor and current Salisbury City Council member against a several-term incumbent. While she will still be an underdog in the race, Heggins bid for office is Rowan Democrats’ best shot at winning a seat in the legislature since Warren upset Lorente T. Coates in the 2010 election.

The Rowan County commissioners primary could also bring a new face to the board. But Republican Lee Withers, China Grove’s former mayor, potentially taking the place of incumbents Craig Pierce or Mike Caskey’s spots does not fundamentally change the direction of the Rowan County commission, where Greg Edds, Jim Greene and Judy Klusman are able to dictate the board’s agenda. If Withers knocks out Pierce, perhaps more votes are unanimous.

A Heggins win, meanwhile, represents an entirely different set of priorities than if Warren wins.

So, here are some facts about the district in which Warren and Heggins will run from N.C. General Assembly and Board of Elections data:

• The district contains 82,640 people (not voters) in Rowan County, which represents about 60% of the county’s population.

• A plurality of voters in the district are registered Republicans, with the number of registered Democrats being just 1,300 less.

• While Rowan’s precincts vary in size and registered voter population, the most important for Warren may be China Grove and Granite Quarry. Both are at the top of the list for total number of registered Republicans and produced more than 2,000 votes in favor of Trump and McCrory.

• West Ward III will be the most important precinct for Heggins. It contains Salisbury’s West End community and is the county’s only majority Democratic precinct, with fewer than 100 registered Republicans at last count and more than 1,700 Democrats. That’s due in large part to Livingstone College.

Heggins had a well-organized campaign in her 2019 bid for City Council that could translate to a run for state legislature. She’ll have name recognition on her side, too. But her campaign will need to shift into high gear shortly after the New Year to upset a well-known incumbent running in a red district.

Quotes of the week: ‘I failed her as a dad’

“I failed her as a dad. I also failed my other kids.” — Sandy Parsons, the adoptive father of Erica... read more