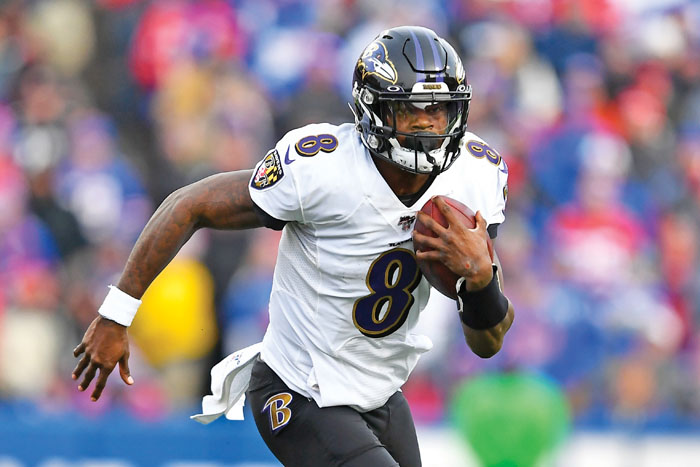 BALTIMORE (AP) — The Ravens have defeated several of the best teams in the NFL during their nine-game winning streak, so it would appear as if the New York Jets shouldn’t pose much of a challenge Thursday night when Baltimore seeks to clinch its second straight AFC North title.

That’s how the oddsmakers see it, anyway. The Ravens (11-2) are a two-touchdown favorite because, after all, they own the best record in the AFC and the Jets (5-8) haven’t beat a team that currently owns a winning record.

Yet, Baltimore coach John Harbaugh isn’t quite ready to distribute shirts and caps that read “2019 AFC NORTH CHAMPIONS.” As far as he’s concerned, New York is every bit as dangerous as New England, Seattle, San Francisco and Buffalo — teams the Ravens defeated during their team-record nine-game run.

“They’re playing great. They won four of the last five, that’s the bottom line,” Harbaugh said of the Jets. “That’s what we talked to the guys about. That’s all you need to know. Watch the tape. They’re playing winning football. We understand that. We know this league. Our guys don’t take anybody for granted. You never can, you never should.”

The Ravens come in with the most prolific running attack in the NFL. Led by Lamar Jackson, who’s only 23 yards short of setting the single-season record for yards rushing by a quarterback (1,039 by Michael Vick in 2006), Baltimore is grounding out an average of 200.9 yards per game.

The Jets are allowing only 75.6 yards rushing per outing, which might make things interesting.

“All helmets to the ball,” Jackson said. “It’s going to be a physical game.”

Jackson is nursing a sore quadriceps, but New York’s defense will nevertheless be pressed to keep up with the league’s highest-scoring team.

New York dropped from No. 1 to No. 2 in rushing defense after giving up 122 yards to Miami last Sunday, but the Jets have allowed a league-low 3.03 yards per carry. Their 98 tackles for no gain or negative yards — excluding kneeldowns — lead the NFL, according to Radar360.

The Jets have allowed only one individual 100-yard rusher all season: Dallas’ Ezekiel Elliott in Week 6. But they’ll have a tough task against Jackson, who’s topped the 100-yard mark four times.

“He can make you miss in a phone booth,” Gase said.

Former Ravens linebacker C.J. Mosley probably had this game circled on his calendar during training camp. Mosley signed with the Jets as a free agent in March after spending five seasons with Baltimore, earning four Pro Bowl bids in the process.

Mosley won’t be participating on Thursday night because he’s on injured reserve with a groin injury. The 2014 first-round draft pick will not be missed by his former teammates.

“He’s not playing, and that’s good for us,” cornerback Jimmy Smith said. “He was a good player -– a great player -– for us, but stay on the sideline.”

Jets quarterback Sam Darnold and wide receiver Robby Anderson are establishing a solid connection late in the season for a second straight year.

Anderson has 18 catches for 303 yards and two touchdowns in his past three games. That includes a seven-reception performance against Miami, during which he had 116 yards and a score.

Anderson finished last season with a flourish, too. He had 23 catches for 336 yards and three touchdowns in his last four games.

“Robby’s always been a really good asset for us on offense,” Darnold said. “He’s obviously super, super fast and sometimes teams struggle to guard him. He affects the game even when he’s not having as many yards as he has been the last few weeks.”

Ravens left tackle Ronnie Stanley was listed as doubtful on Wednesday because of a concussion and could miss his first game of the season. James Hurst will take his place.

Baltimore will also be without special teams standout Chris Board (concussion), and leading receiver Mark Andrews (knee) is questionable.

The Jets have used five different starting combinations at cornerback and safety this season because of injuries and ineffectiveness by some players.

Adams sat out for the first time in his three-year NFL career last week, forcing the Jets to place cornerback Darryl Roberts at safety along with Marcus Maye.

Roberts might be needed at cornerback against Baltimore because of Kyron Brown — last Sunday’s starter — is out for the year with a quadriceps injury and Maulet could be sidelined for a second straight game.

“The way we prepare throughout the week, we do a good job of cross-training at different spots,” said Maye, the only member of the secondary to start every game. “We come prepared.”

CHARLOTTE (AP) — Panthers quarterback Cam Newton has had surgery on his injured foot and is resting in his hometown of Atlanta.

Carolina interim coach Perry Fewell said Wednesday that the surgery was a success, but added there is no timetable for Newton’s return to the football field.

The league’s MVP in 2015, Newton played only two games this season after injuring his foot in a preseason game at New England. He was placed on injured reserve and hasn’t played since. Newton has lost his last eight starts overall and his future in Carolina remains uncertain.

The Panthers can save $19 million under next year’s NFL salary cap by trading or releasing him.

DREW LOCK HOPING TO BE HOMECOMING KING IN KC THIS WEEKEND

ENGLEWOOD, Colo. (AP) — Drew Lock admired the way teammate Kareem Jackson handled his homecoming in Houston. The veteran defensive back kept his cool all week and channeled his energy into a big game on Sunday.

Denver’s rookie quarterback aims to emulate Jackson and become the team’s next homecoming king when the Broncos (5-8) visit the Kansas City Chiefs (9-4) this weekend.

“I’m going to do the same thing that Kareem did,” Lock said Wednesday. “I’m going to keep it very simple, very ‘not about me,’ very that ‘it’s just another game’ we’ve got to go play and we’ve got to go win, and if it does happen that we win, I think the guys will celebrate me like they did Kareem.”

Jackson, who spent his first nine seasons in Houston, set the tone for Denver’s 38-24 stunner with a jarring hit on DeAndre Hopkins. He also broke up three passes and joined Fred Weary and Brian Urlacher as the only players in NFL history with at least 10 tackles, an interception and a fumble return for a touchdown in a single game. That earned him his first AFC Defensive Player of the Week honor.

Lock starred in football and basketball at Lee’s Summit High School about 15 miles from Arrowhead Stadium, then turned down several college basketball scholarships to play football at the University of Missouri, where he posted the second-highest passing (12,193 yards) and third-most TDs (99) totals in SEC history.

A second-round draft pick this spring, Lock spent three months on IR with a sprained right thumb before becoming the seventh starting quarterback in Denver since Peyton Manning’s retirement.

He’s the first Broncos rookie quarterback to win his first two starts since his boss, John Elway, did it in 1983, and last week he became the only rookie QB ever to throw for 300 yards and three touchdowns in his first road start.

The Broncos have lost eight straight to Kansas City, and their previous win at Arrowhead came on Sept. 17, 2015, when Denver scored two touchdowns in the final 36 seconds to stun the Chiefs 31-24.

Lock said he’s been to Arrowhead too many times to count, and always in red and yellow save for his freshman year at Mizzou when the Tigers faced BYU at the notoriously loud stadium.

Lock has injected some enthusiasm in Denver by throwing five touchdown passes with two interceptions in his two starts, and the Broncos have scored at least 23 points in consecutive games for the first time since October 2018.

Lock said he won’t let anything distract him this week, noting his mother is handling ticket requests “so I can kind of avoid that whole hassle.”

“I mean, yeah, you can turn the phone off,” Lock said, “but the people that know you, that you trust, your family, your close friends, they know not to blow you up about coming home, ask you for tickets, as you for this, ask you for that. They know you’ve got something going on, that you’ve got a game to play and you’ve got to stay focused for that.”

“It’s probably going to be hard for me to change their minds when you have an MVP quarterback on the team, unless one day that ends up happening with me,” Lock said. “But no, Patrick is their guy and you know I’m just here to prove myself to these guys in this locker room and keep proving it to everyone around here that I should be the guy for this job.”

Lock even has a connection to Reid, who followed Bob Stull to Columbia in 1989 to be his offensive line coach. Andy Lock, Drew’s father, was a senior offensive tackle that year.

After Lock won his first start against the Chargers two weeks ago, his teammates razzed the rookie, nicknaming him “ Buzz Lightyear “ because the large white wristband he wore to help him remember the play calls resembled the Disney icon’s forearm laser beam.

So, Lock replaced his “secure the bag” touchdown celebration from college with an impersonation of Buzz Lightyear firing his laser beam. On Monday, coach Vic Fangio said he didn’t understand the buzz over Buzz because he had never seen any of the four “Toy Story” movies and didn’t know Buzz Lightyear from Buzz Aldrin.

Asked if that surprised him, Lock’s eyebrows hopped high.

“I actually didn’t know that he didn’t know,” Lock said, laughing. “Yeah, I’m going to have to have a talk with him.”