Dance the night away with sweet ‘Cinderella’ 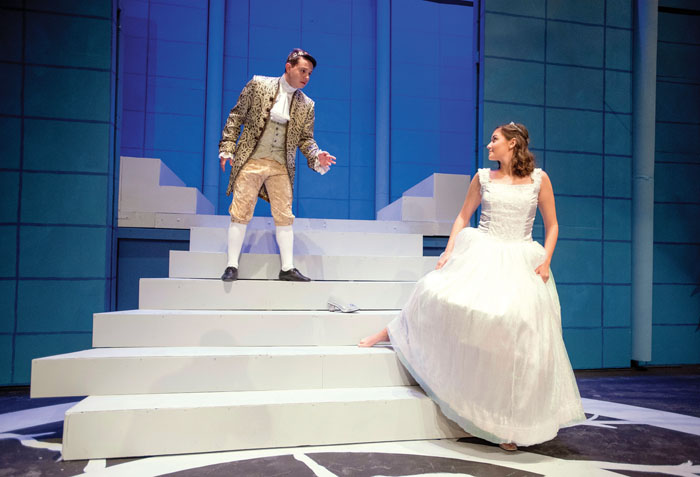 JON C. LAKEY/SALISBURY POST Will McGinnis as Prince Charming. Anna Green as Cinderella. Piedmont Players Theatre present's Cinderella. When her fairy godmother appears and magically transforms her reality into a dream come true, Cinderella enchants the handsome Prince Charming at the ball, but must face the wrath of her enraged stepmother and sisters when the spell wears off at mid-night. This adaptions brings new life into the classic tale. Salisbury,North Carolina,12/2/19.

Will the prince finally find his forever love?

It’s a chance encounter, a fruitless search, bad advice, and a parade of greedy young women before he does find her, but be assured, in Piedmont Players’ production of “Cinderella,” the ending is as happy as you remember.

This production is based on various versions of the story, including the one people of a certain age might remember, starring Lesley Ann Warren as Cinderella, Stuart Damon as the Prince and Celeste Holm as the fairy godmother. Rodgers and Hammerstein wrote the familiar music.

Director Reid Leonard has assembled a cast that is having fun, that sings and dances and interacts with each other, and has two young actors in the lead roles of Cinderella and Prince Topher.

Wendy Weant seems made for the role of the fairy godmother. Weant has the voice for the songs, and for her alter ego, crazy Marie.

Anna Green is Ella and William McGinnis is Topher. It’s Ella’s wicked stepmother, played by Lauren Wilson, who calls her Cinderella because her own little corner in her own little chair is in the cinders of the fire. Wilson is completely self-absorbed as Madame.

The silly stepsisters, Gabrielle and Charlotte, are played by Madisyn Rey and Allie Hardin, with Gabrielle being the more sympathetic sister and Charlotte the stereotypical mean girl. Hardin adds a sneer that will never win the prince over.

Green, a Catawba College student, plays Ella so sweetly, with a real sense of innocence and wonder, that the audience can’t help but fall in love with her. Green has several costume changes that she handles like a trouper.

McGinnis’ love of performing shows in the sincerity of his role as the young prince trying to not just find his girl, but his way as a ruler. Both McGinnis and Green have exceptional voices, as well.

Marc Anderson, who is becoming a Piedmont Players regular, handles the role of the slightly shady Sebastian, adviser to the Prince, with aplomb. He has a strong stage presence and creates a character who is charming and devious and interesting.

Keilen McNeil has the voice and captures the character of Lord Pinkerton, Sebastian’s sidekick.

And Micah Cross is strong as the indignant young Jean-Michel, fighting injustice with impassioned speeches. He’s determined to get the prince to listen to the plight of the people, whose land has been taken away from them.

A huge ensemble cast of men and women dance beautifully at the ball, and sing with gusto in the ensemble pieces. The men must be soldiers, townspeople and dancers at the ball, as well, and manage their several roles.

Leonard’s set is simple, with branches suggesting the woods and imposing walls signifying the castle. And what would a ball be without a grand set of stairs for dramatic entrances and exits?

Ashlyn Keller-Silver makes the choreography flow throughout the many dance sequences.

Ashley Ward of Eastern Costume Company had her hands full with ball gowns, gentleman’s appropriate attire, and lovely gowns for Cinderella. Be sure to watch some of the costume transformations during the show.

The music is prerecorded, and can be a bit overwhelming for some of the voices, but everyone performed well with it. There are so many songs that should sound familiar, and moments when various cast members shine.

It is a production suitable for children, though it might be a bit long for younger children. With a 20-minute intermission, the show runs about 2 hours and 15 minutes. But it moves quickly with the lively musical numbers and upbeat cast.