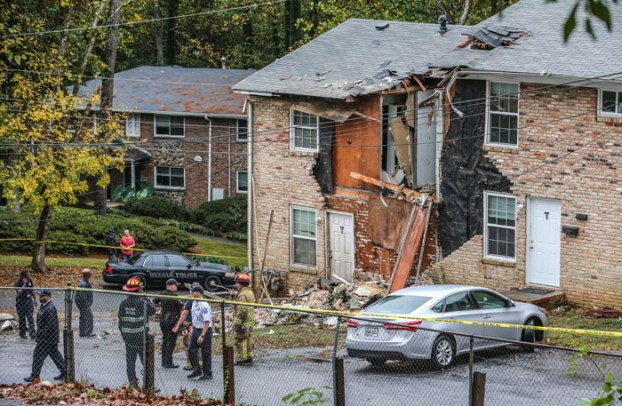 Fire officials look at the scene where an airplane crashed into an apartment complex in Atlanta. John Spink/Atlanta Journal-Constitution via AP

ATLANTA — A preliminary report by the National Transportation Safety Board says a small airplane broke up in flight before crashing into a Georgia townhouse last month, killing two businessmen from Salisbury.

WSB-TV of Atlanta says the preliminary report doesn’t identify the cause of the Oct. 30 crash but includes information investigators will use to determine it.

The agency says shortly after takeoff from DeKalb-Peachtree Airport, the pilot reported losing the vacuum gauge.

WSB-TV engineer and pilot Cliff Rogers says the vacuum gauge controls instruments in the cockpit that tell the pilot things such as direction, altitude and pitching direction.

The final report from the agency is expected to take several months.

Csanyi was the owner of CMW Manufacturing LLC on Speedway Boulevard. Lowrie was president and general manager of the company.

The company specializes in precision machining production parts for the heavy and medium truck industries, according to its website.

The plane was bound for Rowan County, according to Georgia fire and rescue personnel.

Csanyi, known as “Les,” was originally from Toronto and told the Post in a 2016 story that he loved hockey, but that the sport was hard to come by when he moved to North Carolina.

Csanyi told the Post that he needed a new hobby and took up flying as a way to conquer fear. He wasn’t necessarily into aviation and was, in fact, afraid of heights, he said, adding that he thought flying would ease his fear.

He obtained his pilot’s license in 1999.

Csanyi said he met his wife through her brother, Mike Strickland, who was a pilot. Csanyi and Mike became flying buddies and he was introduced to Sandra, whom he married several years ago.