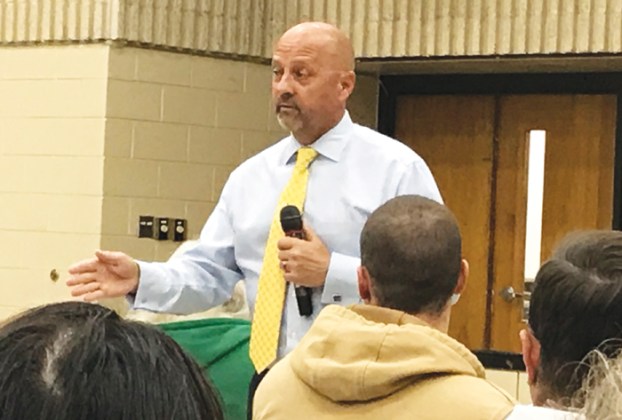 SALISBURY – One day, it hits you like a ton of bricks, says Salisbury Police Department Capt. Melonie Thompson.

“I’ve been an officer for 25 and a half years, and I’ve seen a lot of the same things we go through, like traffic crashes, domestic violence. Over time, those build up. Eventually you become desensitized,” Thompson said Wednesday. “You’re the one that has to be strong for everyone, but sometimes I believe that you forget to take care of yourself.”

Thompson spoke during a training session Wednesday at a “Winning the Battle” training session at the Salisbury Civic Center organized through a partnership with Rowan-Cabarrus Community College and the city and hosted by Sgt. Clarke Paris and Tracie Paris. Clarke Paris served 27 years as a Las Vegas police officer and has worked with the Nevada Legislative Police for two years.

The presentation is a tool used to help first responders deal with tragedies commonly referred to as “critical incidents.”

Clarke Paris, an author and producer of the award-winning documentary “The Pain Behind the Badge,” spoke about the importance of mental health in the lives of first responders and “perception protection.”

“That image that we have and what protects us from those threats will not protect us from the greatest threat, which is ourselves,” Paris said. “You have to take care of yourself.”

He spoke about the importance of emergency responders reaching out to co-workers and checking in with them.

There are a number of services out there to assist first responders, including counseling, therapy and services that have to do with cognitive thinking, he said.

“The culture is you have to be tough because you’re a cop, but going to a burning building or facing someone with a gun is different than saying I am going to fix myself,” Paris told the Post. “Cops and firefighters go to work every day and try to solve everyone’s problems, so of course they think they can solve their own. But it’s OK to reach out for help. We have this culture that thinks that only weak people do that, but that is not true.”

He came up with the idea for the “Winning the Battle” training after being diagnosed with post-traumatic stress disorder.

“I was ashamed, and I realized there was no reason to be ashamed,” he said. “Cops and firefighters tend to think that PTSD only applies to those who were in a horrific shootout or fire, and it’s not. It can occur through the death that you see and the way you get treated through society, and it just builds.”

During “Winning the Battle,” Clarke and Tracie Paris used personal stories, video and stories from high-profile incidents to stress the importance of mental health in the lives of first responders.

“The goal was to bring awareness to the stressors behind the everyday jobs of first responders. We want them to know we support them and their training as well,” said Souwan Kiengkham, a human resources analyst for the city who helped coordinate the training.

A second “Winning the Battle” session through Rowan-Cabarrus Community College will be held from 8 a.m. to 4 p.m. Thursday at the Cabarrus Arena and Events Center, located at 4751 N.C. 49 in Concord. Anyone interested in attending should register by email at letrain@rccc.edu.