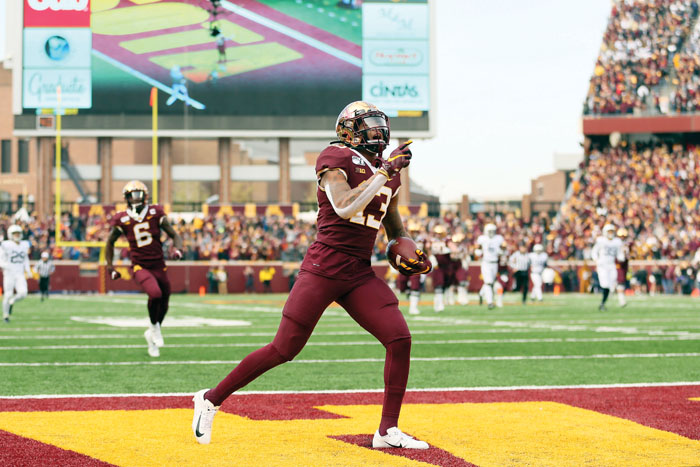 Alabama is fifth in the latest College Football Playoff rankings, behind LSU, Ohio State, Clemson and Georgia, which took over the fourth spot in the selection committee’s second top 25.

LSU replaced Ohio State as No. 1 on Tuesday night after the Tigers won at Alabama on Saturday. The Buckeyes were bumped to No. 2. Clemson moved up two spots to No. 3 after two teams ahead of the Tigers lost for the first time last week, including Alabama.

The Crimson Tide fell to 46-41 to LSU and dropped two spots. Penn State, which had been No. 4, lost 31-26 at Minnesota and fell to ninth. The unbeaten Gophers climbed nine spots to eighth, the largest one-week jump in the six-year history of the College Football Playoff.

Georgia moved up two spots to give the Southeastern Conference two of the top four for the second straight week.

Selection committee chairman Rob Mullens, the Oregon athletic director, said Georgia’s loss to South Carolina (4-6) was noted by the committee, but the Bulldogs’ victories against No. 11 Florida and No. 16 Notre Dame pushed them past Alabama.

Oregon was sixth and fellow Pac-12 team Utah was seventh.

Oklahoma, the highest-ranked Big 12 team at No. 10, dropped a spot after a one-point victory against Iowa State. The Sooners face 13th-ranked Baylor on Saturday. The Bears are the lowest-ranked unbeaten team.

The highest-ranked Group of Five teams were 17th-ranked Cincinnati and 18th-ranked Memphis out of the American Athletic Conference. The highest-ranked team from outside the Power Five conferences receives an automatic bid to a New Year’s Six bowl.

The final rankings and pairings for the College Football Playoff semifinal will be revealed Dec. 8.

Alabama is the only team to make the playoff all five years. Can it get there again?

Barring a stunning November collapse by LSU, the Crimson Tide will not reach the SEC championship game. Looking back at the teams that already took that route might provide clues.

The Ohio State team that reached the playoff in 2016 had a three-point loss at Penn State that kept it out of the Big Ten title game. The Nittany Lions finished fifth in the committee’s final rankings with an 11-2 record.

The Buckeyes on selection Sunday owned victories against the committee’s sixth (Michigan), seventh (Oklahoma) and eighth (Wisconsin) ranked teams, two on the road. They were exactly the type of team the playoff architects had in mind when they determined a conference championship should not be a requirement to make the playoff.

Ohio State was the third seed in those semifinals, so while there was some debate about whether it was fair to have Ohio State in over Penn State, the final choice for the selection committee was between Penn State and Washington, the 12-1 Pac-12 champion. The Huskies didn’t have much of a nonconference resume, but one loss was better than two and Washington got the nod.

That was also the story of the 2017 selection process. Alabama was the fourth choice that year despite getting squeezed out of the SEC championship game by West rival Auburn. The Crimson Tide finished 11-1 and on selection Sunday held victories against teams the committee ranked 17th (LSU) and 23rd (Mississippi State). Alabama got the nod over Ohio State because of what it didn’t do: Lose twice and get blown out by an unranked team. The Buckeyes (11-2) had both of those marks on their resume, and even though they won the Big Ten, it wasn’t enough.

So what does Alabama need to happen this year to keep its streak of playoff appearances alive? The Tide won’t have a resume loaded with big wins to fall back on like Ohio State in 2016. Without that, the Tide could use at least two Power Five champions to finish with two or more losses. No Power Five champ with one loss or fewer has been left out for a team that did not win a conference.

Maybe the most comparable team to Alabama from previous years is Ohio State in 2015. Those Buckeyes were the defending national champions, with a loaded team that featured Ezekiel Elliott, Joey Bosa and eight other players that were drafted in the first three rounds the following April.

Those Buckeyes lost a November game at home to Michigan State on a last-second field goal. And that was it. The Buckeyes blew out rival Michigan the next week to finish 11-1, but they really weren’t even part of the playoff conversation heading into championship weekend.

Clemson made the playoff unbeaten. Alabama was a 12-1 SEC champion. The winner of undefeated Iowa and Michigan State played a playoff play-in game at the Big Ten championship that the Spartans won. Oklahoma earned its way in by winning the Big 12 without a conference championship game, but with four victories against teams in the committee’s final top 25.

Another difference: Alabama lost to the unbeaten No. 1 team in the country on Saturday. The Michigan State team that beat Ohio State had already lost to a Nebraska team that finished under .500. And the Spartans needed a miracle last-second botched punt to beat Michigan.

It’s difficult to project ahead what the committee will do next with Alabama. Those Pac-12 teams trailing the Tide won’t have stacked resumes either, but they could have a conference championship and only one loss, and that’s been enough to keep teams like Alabama out before.