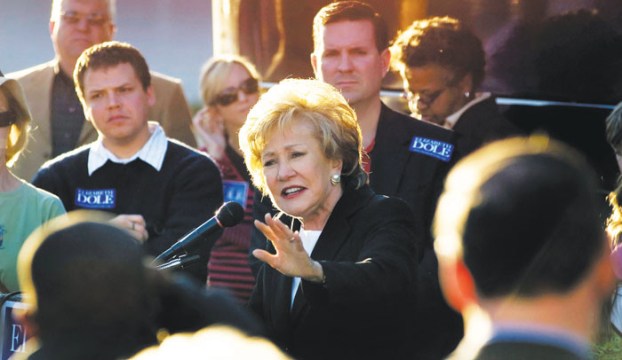 Hagan rode a perfect storm toward defeating Dole in 2008

SALISBURY — In these parts, Kay Hagan, who died Monday at age 66, stood as a giant killer.

She beat Salisbury’s favorite daughter, Elizabeth Dole, in what you could classify as one of the biggest upsets in N.C. political history.

Something the late Donna Peeler said on the night of the Nov. 4, 2008, election, when incumbent U.S. Sen. Dole conceded her defeat at the Salisbury Station, still rings true.

“It was almost the perfect storm,” said Peeler, who worked hard locally on Dole’s behalf. “And the Democratic National Committee put so much money in here — nobody knew who Kay Hagan was in May.”

The feeling that night was a mix of disbelief and raw emotion.

Hagan, a 10-year state senator from Greensboro, had gone against one of the more famous and admired women in America — and won handily. Fox News projected Hagan as the winner by 8:43 that evening, just over an hour after the polls closed.

In the end, she outpolled Dole 52% to 44%. Dole was a two-time U.S. Cabinet member, the former head of the American Red Cross and a one-time presidential candidate, and could have been first lady had husband Bob been elected president in 1996.

Elizabeth Dole made history herself by becoming the first woman elected to the U.S. Senate from North Carolina in 2002, and her seat had been in Republican hands since Jesse Helms won it in 1972.

So how did Hagan win?

The perfect storm Peeler alluded to included coattails of President-elect Barack Obama, an infusion of outside money for tough political ads and Hagan’s own refusal not to be intimidated by Dole’s resume.

Hagan fought like the underdog she was, mentioning at political stops she wanted to give Dole a ruby red pair of slippers, such as those worn by Dorothy in “The Wizard of Oz,” and send her back to Kansas.

Translated, this was Hagan’s way of saying Dole had spent more of her life and career away from North Carolina, often voting in years past with husband Bob in Kansas.

Hagan noted it wasn’t until 2002, when Dole bought her mother’s home in Salisbury to establish an N.C. residence, that she again started voting in the state and that most of her adult life she had lived in Washington.

Hagan told voters she was the only candidate who lived in North Carolina and the only one whose husband could vote for her, and she kept repeating the theme of Dole being an absentee senator.

The Hagan campaign said Dole had been in North Carolina only 13 days in 2006, when Dole otherwise was chairing the National Republican Senatorial Committee, working to get GOP candidates elected in other parts of the country.

In 2007, Hagan supporters contended, Dole was in the state only 20 days total.

The gloves really came off in political ads from both sides. The most famous one might have been from the Dole camp, and it came to be called the “Godless American” ad.

Dole’s campaign brought up Hagan’s attendance at a fundraiser in her honor that was held at the Boston home of Woody Kaplan, an advisory board member of the Godless Americans political action committee, an atheist advocacy group.

The 30-second advertisement showed members of the Godless Americans committee speaking to some of their goals, such as taking “under God” out of the Pledge of Allegiance and removing “In God We Trust” from U.S. currency.

The ad ended with a photograph of Hagan, while another woman said, “There is no God!”

Hagan became enraged. She filed a defamation and libel lawsuit against Dole, plus ran her own ad accusing Dole of violating the Bible’s Ninth Commandment by bearing false witness.

Hagan noted she was an elder at her Presbyterian church, and to counter the ad, she held a highly publicized news conference with her family and pastor.

Dole defended the ad, saying the commercial was factual and designed to question Hagan’s associations, not her faith.

By Election Day, polls showed Dole trailing. In North Carolina, out of 11 newspapers that made endorsements in the U.S. Senate race, all went with Hagan.

With the race looking to be tight, outside money had flowed in from both the Republican and Democratic senatorial committees — at least $22 million, according to pre-election reports.

On the night of her election victory, Hagan said it was “a testament to how hungry people are for change.”

In his own analysis a day after the election, Catawba College political science Professor Michael Bitzer said voters who went straight-ticket Democratic in the state — mostly in support of Obama — proved to be the difference for Hagan.

If you pulled out the Democratic straight-ticket voters, Dole would have won 51% to 49%, Bitzer said. Early voters also heavily favored Hagan, thanks to the Obama grass-roots efforts.

In the end, Dole lost mostly because of the Obama factor and the president-elect’s “tidal wave of organization,” Bitzer concluded.

At the Salisbury depot, with Bob Dole watching from the audience, a gracious Elizabeth Dole asked the crowd to pray for God to guide and support Hagan once she took office.

Dole received the depot audience’s loudest applause when she acknowledged she wasn’t happy with the tone the campaign took but didn’t regret fighting back.

In her home county of Rowan, Dole beat Hagan by 7,159 votes and won 36 of its 44 precincts. In her concession remarks, Dole was prophetic.

She was 72 at the time and said she wasn’t ready for retirement. “I will rededicate myself to public service wherever and whenever the opportunity presents itself,” Dole said.

Today, she heads the Elizabeth Dole Foundation, which provides support for military caregivers.

As for Hagan, she dropped the defamation and libel lawsuit against Dole within a couple of weeks after the 2008 election and lost in her own re-election bid in 2014 to Republican Thom Tillis — a nonpresidential year.

Still, she will ever be remembered for fitting a Salisbury icon with ruby red slippers.

‘You all have given so much’: Stars align for Elizabeth Dole Foundation event honoring military caregivers