For local veterans, Frontier Coffee Shop is more than free java and doughnuts

SALISBURY — For his service as an Army helicopter crew chief in Vietnam during 1968-69, Coy Thompson of Kannapolis received 14 medals, including the Silver Star. 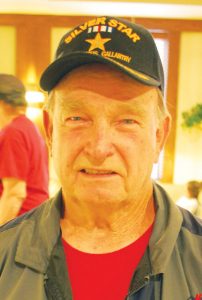 Vietnam veteran Coy Thompson of Kannapolis was an Army helicopter pilot who may be in line for a Congressional Medal of Honor.

Rumor had it at the Frontier Coffee Shop on Tuesday morning that he’s also in line to receive the Congressional Medal of Honor, possibly before the end of the year. It goes back to a dramatic rescue of U.S. soldiers Thompson’s helicopter crew made during the Tet Offensive 50 years ago.

It’s just one of the heroic stories — or not-so-heroic banter and kidding — you are likely to hear every Tuesday when veterans gather for free coffee and doughnuts at K&W Cafeteria.

For two hours on Tuesdays, from 8:30 to 10:30 a.m., the K&W dining room becomes the Frontier Coffee Shop, and the room usually fills with more than 100 military veterans from all eras, going back as far as World War II.

The servers are women from the Elizabeth Maxwell Steele Chapter of the Daughters of the American Revolution. While most of the morning is devoted to veterans sitting around and gabbing with each other, they also conduct a little business meeting.

As always Tuesday, it included a pledge to the flag, prayers at the beginning and end, an update on anyone having health problems or dealing with loss, an introduction of new guests and sometimes a presentation or two.

There was all that Tuesday, plus a rundown of some local programs for veterans coming up as Veterans Day (Nov. 11) approaches.

Here are just a few things for local veterans to put on their calendars:

• In Mocksville on Nov. 7, the annual Veterans Appreciation Lunch at 1 p.m. and Appreciation Dinner at 6 p.m. will be held. To register, call 336-753-6230 or stop by the senior center in town and sign up. The lunch and dinner include a free meal, a patriotic program and entertainment.

• At St. James Lutheran Church in Rockwell’s late service Nov. 10, an induction ceremony will be held for Cecil Ray Fisher, a World War II Army veteran who was part of this year’s induction into the N.C. Military Veterans Hall of Fame. Fisher could not make that May ceremony in Concord because of illness.

• The public is invited to attend the dedication of the Rowan County Vietnam Veterans Memorial at about 3:30 p.m. on Veterans Day at Salisbury City Park near the corner of North Jackson and West Miller streets.

Those attending are encouraged to bring a lawn chair and umbrella, if needed. The dedication will begin after the Veterans Day Parade in Salisbury.

Military veterans, family members and supporters are invited to the lunch and program honoring veterans from all eras. To register, email frontiercoffeeshopevent@gmail.com or phone or text 704-433-6408.

A $5 donation per attendee is suggested but not mandatory. Food will be provided by Thelma’s Down Home Cooking. Trellis Supportive Care is the host sponsor, and the Gary Sinise Foundation is a presenting sponsor.

David Brody, founder and chief executive officer of the N.C. Military Veterans Hall of Fame — in which Thompson was enshrined this year — spoke to the crowd and encouraged nominations for the 2020 class.

Every veteran in the state is worthy of induction because they served, Brody said.

“Don’t think that your job, your service was unimportant,” he added. “We should be flooded with nominations.”

North Carolina has about 800,000 military veterans.

Next year’s induction festivities will be May 1-2 at the Four Seasons Hotel in Greensboro. Brody said the ceremony will move each year until the Hall of Fame can establish a permanent home.

He would like the hall to be up and running in Rowan or Cabarrus counties in two to three years, Brody said. The Hall of Fame inducted its first class in 2018.

If every N.C. veteran donated just $20, the contributions could pay for a facility three times over, Brody said.

Marlous Black, public affairs officer with the Hefner VA Medical Center in Salisbury, encouraged veterans to make sure they are signed up and getting the benefits they’ve earned. Building 3 at the VA houses the enrollment and eligibility office for the medical center.

Tom Harrell, one of the founders of the Frontier Coffee Shop, said he recently spoke with Todd Smith, executive vice president of K&W Cafeteria, about the possibility of launching more veterans coffee shops in other cities, as far east as Fayetteville.

It’s hard to duplicate the success Mooresville and Salisbury have seen with their coffee shops, but Harrell said he thought it’s possible. “Slowly, we may expand across the country,” Navy veteran Troy Horton added.

Don Timmons of Trellis Supportive Care, which hosts veterans coffee shops here and elsewhere, said efforts are underway to get one started in Asheville.

Overall, the group talked about the importance of getting the word out about the Nov. 13 luncheon at West End Plaza, where they hope hundreds will attend.

A suggestion came from the audience for pastors to use the next two Sundays to make announcements to their congregations about the lunch.

“I think that would be a great idea,” Horton said.

The Army drafted Thompson, who went to West Rowan High School, and he ended up in Vietnam as a helicopter crew chief. His helicopter was flying a major back from Saigon when a radio report said an Army scouting unit was being backed up to a swamp by the Vietcong.

Reinforcements wouldn’t be available for two to three hours, and Thompson’s helicopter was the only one nearby.

“Thompson, do you want to go and get these guys?” the major asked. He answered that the major was the one with rank, and that it should be his decision whether or not to wait for the reinforcements.

Thompson’s crew went after the stranded unit. It took four trips to extract everyone safely. Many of the men were shot up, as was Thompson’s helicopter, but no one was killed.

Among his medals, Thompson received the Purple Heart, Air Medal and Bronze Star for his service in Vietnam.

His helicopter crew supported the 25th Infantry, and Arthur Brown of Cleveland said he didn’t realize it until sitting at the coffee shop, but he probably received a ride in Vietnam from Thompson.

Brown said he and Thompson know of at least two guys who resisted suicide by making connections with other veterans at the coffee shop. It may seem like only coffee and doughnuts, but the veterans say it’s more than that.

“The people that I’m around who are not military — they just don’t understand,” Brown said.

Hagan rode a perfect storm toward defeating Dole in 2008

SALISBURY — In these parts, Kay Hagan, who died Monday at age 66, stood as a giant killer. She beat... read more