Livingstone rolls up yardage, but falls to Shaw, 27-20 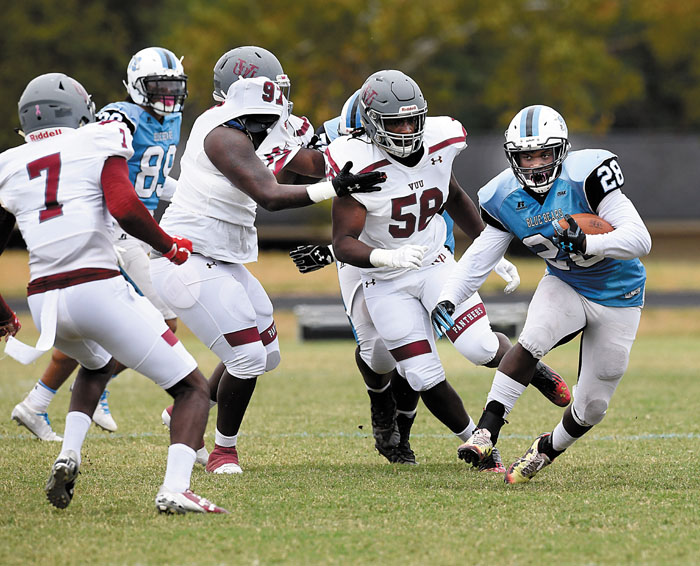 Livingstone's Darrell Bethune (28), shown during an earlier game this season, led the Blue Bears in rushing yards on Saturday at Shaw. ... Photo by Wayne Hinshaw, for the Salisbury Post

Gibbs’ final TD, a 32-yard dash with 6:18 left in the contest, gave the Bears a commanding 10-point advantage. Livingstone had the ball two more times, but managed just a field goal.

The loss was the third straight for the Blue Bears, after opening the season at 4-0. In the CIAA, Livingstone falls to 1-3. Shaw improves to 3-4 overall and 2-2 in the conference.

Livingstone had the more impressive offensive statistics, with 26 first downs and 471 total yards. However, the Blue Bears shot themselves in the foot with 11 penalties for 96 yards and missed opportunities in the red zone.

Livingstone’s second possession saw the Blue Bears go 69 yards in nine plays, but it ended when quarterback Xavier Longerbeam’s pass was intercepted by Thurman Trapp, at the Shaw 3-yard line.

Longerbeam, a senior starting for the first time this season, threw for 171 yards, completing 11-of-23 passes, but the offense managed just 10 points in the first half.

Longerbeam did lead a 12-play, 68-yard drive late in the first half, going over from the 1-yard line himself, for a touchdown, tying the score at 7-7.

Both teams managed short drives in the final five minutes of the half, each resulting in a field goal. Beni Kinsemi booted a 38-yarder for Shaw and Josue Gomez nailed one from 36 yards, tying the game at 10-10, with 34 seconds left.

Midway through the third quarter, Gomez missed a 40-yard field goal that could have given LC the lead. Five plays later, Gibbs got loose for a 48-yard TD run and Shaw led, 17-10, at the 6:52-mark.

On the Blue Bears’ very next series, Longerbeam was tackled for a loss and suffered a shoulder injury. Sophomore QB Miles Hayes came on in relief and eventually, led LC on a nine-play, 72-yard drive, knotting the score once again. Running back Darrell Bethune scored from the 6-yard line, with 13:14 remaining in the game and Gomez kicked the game-tying extra point.

Shaw then drove 42 yards on nine plays, aided by a roughing the passer penalty, and Kinsemi kicked a 42-yard field goal for a 20-17 lead.

Livingstone’s offense then suffered a three-and-out at the most inopportune time. Then Shaw, helped by another defensive penalty on the Blue Bears, was quickly at the LC 32-yard line. Gibbs took it from there, scoring his third TD of the game.

In his quarter and a half, Hayes completed nine of 21 passes for 149 yards. He led one last Livingstone drive in the final 2:32, down by seven points, but his long pass from the 50-yard line was intercepted at the Shaw 17 by Da’shaw Wallace.

Senior receiver Anthony Faraimo had a big game for the Blue Bears, catching six passes for 103 yards. Anthony Brown made four grabs for 91 yards. Bethune led LC on the ground, with 54 yards on 11 carries. Andrew Faraimo added 46 yards on 10 attempts.

NOTES: The game was played at George Williams Complex on the campus of St. Augustine’s. LC also played on that field on Oct. 12, falling to St. Aug’s, 20-12. … Shaw now leads the series, 19-14-5. … Livingstone’s final three games are at home, beginning next Saturday, hosting Winston-Salem State at 1:30 p.m. … the WSSU game is Military and Public Safety Day at Livingstone.