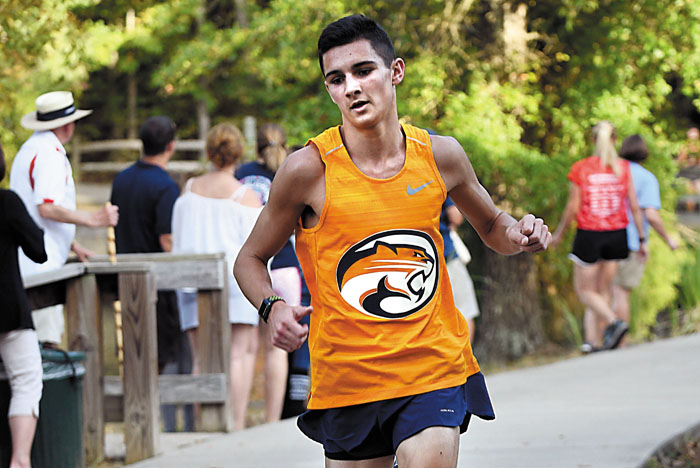 SALISBURY — Runner-up and second-place are adjectives that have come in front of Zac Barbee’s name in recent cross country seasons, but on Wednesday at Salisbury Community Park, nothing was ever in front of him.

The Carson senior started quickest and finished earliest, turning in a winning clocking of 17:19. His first major victory came in the North Piedmont Conference championships. He crossed the finish line with a smile and a punch that said, “Finally.”

“It was his time to shine,” Carson coach Les-lee Ihme said. “Zac left it all out there.”

Barbee, runner-up to West Rowan’s Thomas Waldo in the NPC Championships in 2018, and teammate TJ Jones roared off the starting line together.

“I had it in my head to get to the front fast, and TJ was right behind me,” Barbee said. “I told him to stay with me, to stay second. For about a mile he did.”

The Salisbury Community Park course is considered more challenging than the Dan Nicholas Park layout that’s been home for many years to the Rowan County Championships. There’s a serious hill to contend with, at least for the NPC event, plus competitors at SCP run mostly on grass, rather than loose gravel. After heavy rainfall late Tuesday and early Wednesday, some of that grass had turned into mud.

“Temperature-wise we couldn’t have asked for a day any better,” Barbee said. “The breeze, the weather, that was super-good. But it was so muddy. Puddles everywhere.”

“Our seven runners all broke 20 minutes,” Barbee said. “That was a goal, and guys ran great times for this course. It was a good day for all of us.”

Carson was good, but the team champion was still coach Scott Foster’s Falcons. Well-balanced West took its second straight title with a score of 31.

The Falcons sprinted home in a group, with junior Luke Harrison (third place) leading the way. Also scoring were Drake Barclay (fifth), Issac Castro (sixth), Damian Ackman (eighth) and Jacob Bogle (ninth). All of them ran between 18:00 and 18:22.

“The plan was to stay in a pack,” Harrison said. “Damian Ackman (respiratory infection) has been sick, but everybody ran a good time. We were running 19s earlier, but now we’re all in the low 18s. We’ve improved together.”

West is a steady cross country school and generally has a lot of capable runners.

“We try to keep them in a pack and let them pull each other through,” Foster said. “We’ve got 17 kids on the team, but 11 of them are first-year guys, so we’ve been up and down. Today we were up. Maybe we’re peaking at the right time.”

Foster said the heat this season has been the worst he’s encountered in a long coaching career. The best temperatures of the season greeted runners on Wednesday, but course conditions added a new challenge to the equation.

“This is our home course, and we’re used to it, but there were a lot of muddy spots today,” Harrison said. “At times, you felt like you were just sinking.”