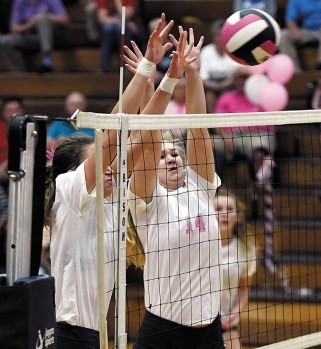 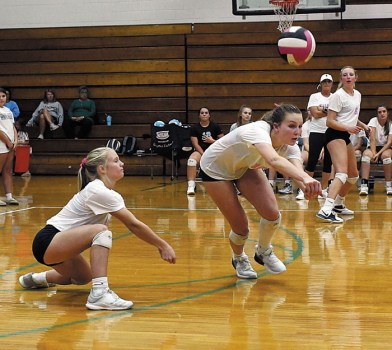 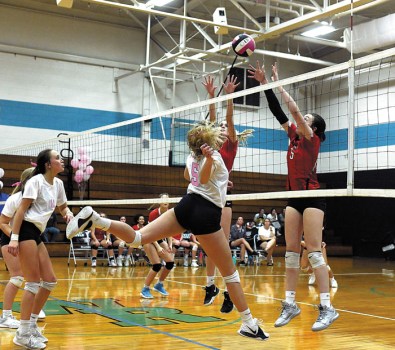 MOUNT ULLA — Tense and tight, but in the end, KK Dowling made everything all right.

West Rowan was pushed to the brink of its first loss of the volleyball season on Thursday at home against North Iredell.

“All I could think of at the end was that I didn’t want to lose, not here, not in our house,” Dowling said. “I was going to do all I could not to lose and I trusted all my teammates to do the same.”

West spotted North Iredell one point in each of the five sets for “improper equipment.” The numbers on the Falcons’ special “Pink-Out” uniforms were deemed to be smaller than regulation, and that was the price they paid.

West played its second match without injured setter Allison Ennis, who is going to need surgery to repair a foot ligament. Sophomore Noe Gaeta, called up from the jayvees stepped in for Ennis and showed remarkable poise and soft hands, but she’s still learning her teammates’ strengths and weaknesses, and Ennis’ emotion isn’t easily replaced.

Gaeta made her debut on Tuesday when West survived a five-setter at South Iredell.

Added West star Tori Hester. “We know Noe can do it. She’s not scared, and we’re not scared to have her in there.”

Still, at least early on, West (18-0, 7-0) didn’t look like the same squad that had terrorized and pulverized opponents earlier in the season while rising to a No. 1 state ranking.

“We went into it thinking no one is going to beat us, but our communication wasn’t as good as it needs to be, and we weren’t playing together they way we usually do,” Hester said.

West never could get any separation in the first set and trailed 20-19 at crunch time.

After a West timeout, North Iredell (11-6, 4-4) missed a serve for 20-20. Then Dowling served four straight aces to take the pressure off. At 24-20, North Iredell never got control of Dowling’s serve, and Gaeta alertly spiked an overpass for set point.

But West never got it going in the second set and trailed by as many as nine points. Karli Grey, a 6-footer who had a terrific day for the visitors, got the kill that concluded the set and tied the match at a set apiece.

While West didn’t look much like itself, North Iredell looked like a completely different team from the one Carson dismantled last week.

“We brought more energy today,” NI coach Megan Norris said. “We had a good pregame meeting and we came out with a lot of determination. There’s some great volleyball played in our league. West Rowan is an excellent team, but we competed very well with them.”

The third set was tight early, but a blistering kill by Hester and a combo block by Gaeta and Carly Stiller ignited the Falcons. Hester and Dowling got warmed up and the Falcons led by as many as 12 points before cruising to a 25-17 victory and a 2-1 lead.

“About the middle of the third set, that’s when we woke up,” Coach Dowling said. “Until then, we couldn’t find any rhythm at all.”

After getting smashed in that third set, North Iredell, which also lost to West in five sets at home, could have headed to the bus, but chose not to. The Raiders stayed in the fourth set all the way. They got a big ace from Madeline Sigmon, a flurry of kills from Grey, and finally won 26-24 on an ace by Ailena Mykins to force a fifth set.

“We weren’t great, but at the same time North Iredell was doing so many good things,” Coach Dowling said. “They picked up some balls that no one picks up when Tori and KK hit them the way they were hitting them. And Grey was phenomenal. We tried every trick in the book, tried to double-block her and tried to triple-block her, but we haven’t blocked her yet.”

West got down 4-3 in the fifth set, but digs by Brooke Kennerly and kills by Kelcie Love, Dowling and Hester turned the tide.

During a timeout with West clinging to an 11-10 lead, Ennis fired up her teammates with her best “Vince Lombardi” speech.

It was 13-13 when Hester pounded down a go-ahead kill for the Falcons, but a kill by Grey tied it.

Then Dowling missed — just a bit long — and North Iredell was in front 15-14 and serving for the match.

“Kind of stressful there, but I think we all did a good job of calming down and pushing through,” KK Dowling said. “This is the kind of matches that we play in our league, and I’m glad our conference is so strong. A match like this prepares you for the playoffs.”

Even though her error had put her team on the edge of its first loss, Dowling was eager to hammer the equalizer for 15-all, and she executed.

West had missed three serves in the fifth set, but Kenadi Sproul put a big one in play, and Dowling promptly put West ahead 16-15.

Then it was match point for West. Gaeta made a terrific dig that led to Dowling’s final spike of the day — and an emotional celebration.

“There was as much heart on that court today as I’ve ever seen in a match,” Norris said. “We brought all kinds of heart to this one, but heart doesn’t always win. Sometimes it loses — at least on the scoreboard.”