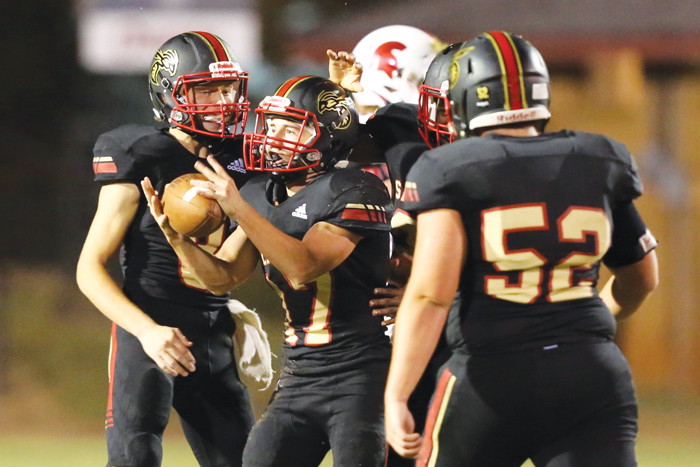 James Sipes/for the Salisbury Post ... Salisbury’s Parker Lippard (17), center, comes up celebrating after catching a pass for a first down, last Friday against Central Davidson. The Hornets won, 10-0.

Surprising because Lippard hadn’t been a factor since he had two catches for 39 yards opening night against North Rowan. In Salisbury’s next four games, he had one catch for 3 yards.

But Salisbury’s defense had been on the field so much on Friday that Lippard was in action late in the contest, with Salisbury’s offense backed up, trying to kill the clock and clinging to a precarious 3-0 lead.

A punt from their end zone seemed inevitable with the Hornets facing second-and-12 from the SHS 5. Quarterback Vance Honeycutt had thrown only one pass in the second half.

But when the Hornets opted to go to the air, Honeycutt found Lippard. Lippard hadn’t gone far on his route. He’d just sort of hunkered down in an open space.

“Their defense was occupied with everyone else, so I was wide open,” Lippard said. “We’re taught that when we catch the ball to get up the field, to get north.  All I’m thinking is to get to the first-down marker.”

The marker was at the 17. Lippard stretched to the 18 before he was tackled. The chains moved. The clock moved.

Two runs didn’t get much, but on third-and-8 from the 20, Honeycutt hit Lippard again, this time cruising up the Salisbury sideline. He made it to the 33 for another first down, and the Hornets were out of the hole. Now, even if they had to punt, Central Davidson was going to have a long way to go against a defense that has been the human equivalent of a stone wall.

Two runs got 2 yards as the clock neared two minutes. Again, it was third-and-8. Again, Lippard settled into an open space and again Honeycutt spotted him.

“Same play as the first catch,” Lippard said. “I got in between two defensive players and then spun out of a tackle.”

He almost went all the way. A safety collared him at the Central Davidson 40 after a gain of 25 yards. Now it was clear that the Hornets were going to win. Moments later 3-0 turned into the 10-0 final when Mike McLean broke a touchdown run.

It was a run that Honeycutt and Lippard had made possible. In those frantic final minutes, Lippard had three catches for 52 yards.

“Lippard was only in there for limited plays, but he had three huge catches for first downs and two were on third down,” Salisbury head coach Brian Hinson said. “He’s a smart kid. He knew what he needed for those first downs. And the blocked his tail off on his other snaps.”

Lippard was a great example for every player who has seen their playing time cut, for whatever reason. Stay ready. When the next opportunity comes, make it count.

Lippard (5-7, 140) is known mostly for his work as a feisty baseball infielder, but he was recruited to try football for the first time last year as a junior.

“A lot of my friends were playing, so I decided to give it a shot,” Lippard said.

The Hornets are glad he did.

“Maybe he just didn’t want to play jayvee ball,” Hinson said with a laugh. “He’s a great kid who gives us everything he has. He always comes to practice, practices hard and enjoys practice. Kids like that, you’re always excited when they have success.”