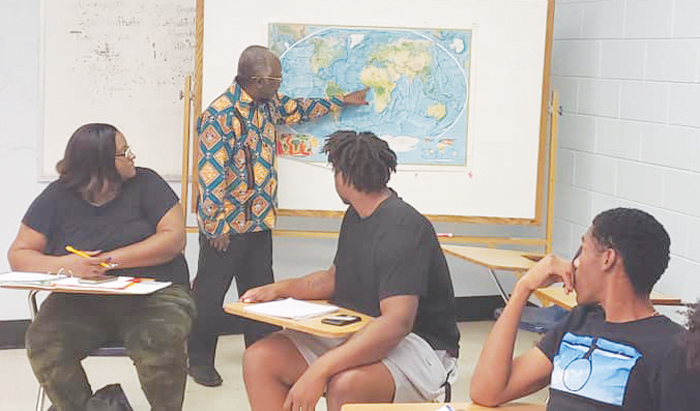 Kojo Yankah of Ghana lectures on African history during a class at Livingstone College. 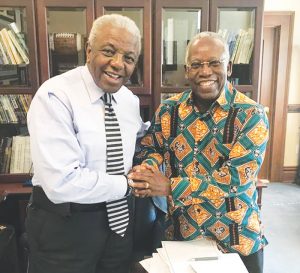 His tour has included stops in Georgia, Delaware, New York City and Boston. His only other visits in North Carolina were at N.C. State and Duke universities.

As founder, board chairman and past president of the African University College of Communications in Ghana, Yankah included as part of his visit to Livingstone the possibility of exploring a collaboration with that university.

In 1994, Yankah was chairman of the Pan-African Historical Theater Festival in Ghana and was invited to participate in a symposium in Jamestown, Virginia. It was during that visit that he considered the link between that Jamestown and the one in Ghana. His research led to his 10th book.

Yankah’s book release coincides with the 400th anniversary of the Trans-Atlantic slave trade.

“Four hundred years ago, the first 20 Africans were shipped out of Angola in south west of Africa to America,” he told Parrish’s class. “The question is, why did anybody want to bring Africans on the continent of Africa to these parts of the world?”

The answer to that question opens the door to his lecture, offering students a concise snapshot of African history and the importance of knowing more about the land from which civilization began.

Yankah spoke of Africa’s richness in minerals such as gold, diamonds, uranium and oil; of its kingdoms and kings, queens and pharaohs who ruled in the 17th century; and of its advanced universities and architectural treasures.

Yankah said the African Union, led by Ambassador Arikana Chihombori-Quao, who wrote the forward to his book, consists of 55 member states of the African continent. The main goal of the union is to rid the continent of the vestiges of colonization and apartheid and promote unity and solidarity, creating a United States of Africa and global force, he said.

Livingstone President Jimmy R. Jenkins Sr. and State Alexander, executive assistant to the president and vice president of communications, met with Yankah and said they are hopeful about future collaborations with his university in Ghana.