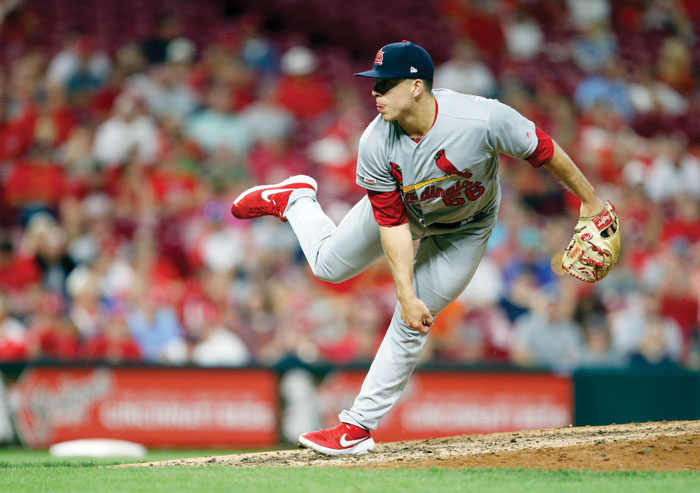 FILE - In this Aug. 15, 2019, file photo, St. Louis Cardinals relief pitcher Ryan Helsley throws against the Cincinnati Reds during the eighth inning of a baseball game in Cincinnati. Helsley was disappointed by his first exposure to the Atlanta Braves’ fans use of the Tomahawk Chop for their chants during games. Helsley’s vantage point is different than most players who visit SunTrust Park. He is a member of the Cherokee nation. (AP Photo/Gary Landers, File)

ATLANTA (AP) — St. Louis Cardinals reliever Ryan Helsley thinks the Tomahawk Chop chant is insulting, and he was disappointed when it was heard during Game 1 of the NL Division Series against Atlanta.
Helsley is not the only player who dislikes the chant. The 25-year-old rookie’s perspective is different than most players who visit SunTrust Park.
Helsley is a member of the Cherokee nation. The Tahlequah, Oklahoma, native speaks the Cherokee language and is one of only a few Native Americans in the majors.
Hearing the chant by the fans, a part of the Braves’ tradition since it was borrowed from Florida State in the early 1990s, was a shock for Helsley.
Helsley told the St. Louis Post-Dispatch he was insulted by what he saw and heard in Thursday’s series opener.
“I think it’s a misrepresentation of the Cherokee people or Native Americans in general,” Helsley said before the Braves’ 3-0 win in Friday’s Game 2 .
“Just depicts them in this kind of caveman-type people way who aren’t intellectual. They are a lot more than that. It’s not me being offended by the whole mascot thing. It’s not. It’s about the misconception of us, the Native Americans, and how we’re perceived in that way, or used as mascots. The Redskins and stuff like that.”
Helsley can trace his lineage to ancestors who were forced to march along the Trail of Tears.
Helsley’s grandfather was full-blooded Cherokee. His great aunt teaches at an immersion school where the Cherokee language is taught to assure its continued use.
The right-hander recorded one out and gave up one hit in the Cardinals’ 7-6 win in Game 1 . He did not appear in Game 2 and was not available for comment following the game.
Helsley, who spent much of the season shuffling between St. Louis and Triple-A Memphis, was not with the Cardinals when they made their only regular-season visit to Atlanta on May 14-16.
The Braves made sure fans were ready for the chant. Red foam tomahawks were waiting at every seat in the park before Thursday’s game.
Helsley told the paper “the disappointing part” is that “stuff like this still goes on. It’s just disrespectful, I think.”
Braves fans often start the chant when visiting teams make a pitching change, including when Helsley entered in the eighth inning.
After the game Thursday, Helsley researched the chant’s history, including attempts to change or erase it from Braves games.
“It’s interesting that people have suggested that they should change it, and it’s still the same thing,” he said.
MLB Commissioner Rob Manfred told The Washington Post in February “The Braves have taken steps to take out the tomahawk chop.”
Still, in-house music encourages the chant, not to mention the free foam tomahawks.
“It’s everywhere,” Helsley said.
“I feel like there are a lot of other things they could use as mascots. Using our heritage as a mascot, it isn’t the best thing. There have been schools who in the past 20, 30 years have changed their mascots. I don’t see why professional teams are so far behind on that.”
The chant also has been used by fans of the NFL’s Kansas City Chiefs.
___
More AP MLB: https://apnews.com/MLB and https://twitter.com/AP_Sports