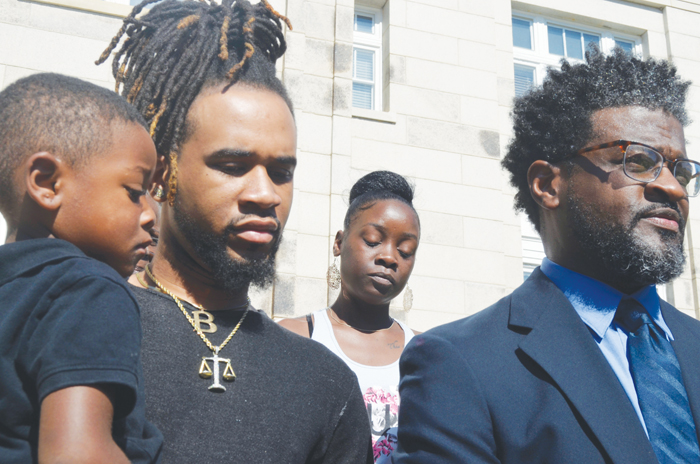 Witt Darnell Alexander, left, was joined October 2019 by social justice advocate John C. Barnette at a news conference to discuss his arrest in the 2018 murder of Mariah Turner and the dismissal of the charges in September after 444 days in jail. Alexander is holding his son. Shavonne Walker/Salisbury Post

SALISBURY — Witt Darnell Alexander, who was wrongfully accused of murder and spent 444 days in the county jail, is demanding an internal investigation and the resignation of Rowan County District Attorney Brandy Cook.

Alexander, 26, a Rowan County native, was arrested June 24, 2018, and charged with the murders of 25-year-old Mariah Nicole Turner and her unborn child. Last month, authorities dismissed the case against Alexander after surveillance video showed him and a friend at the Epicentre shopping mall in Charlotte at the time of the shooting.

Turner was shot during a home invasion. Someone fired multiple shots and tried to force their way into her parents’ home. Turner was trying to shut the front door when she was shot. She died at the scene.

Court records filed in September show that Alexander was charged primarily based on an eyewitness identification. A search warrant filed in July said a photo lineup was used to pinpoint Alexander.

The witness said he recognized the gunman but didn’t know his name. Detectives identified the man the witness described as Alexander.

Alexander was one of six people whose photo was included in a lineup that was presented to the witness. The witness identified Alexander as the man who shot Turner.

Alexander was arrested hours after the shooting. He charged with first-degree murder, discharging a weapon into an occupied property, assault by pointing a gun, possession of a firearm by a felon and murder of an unborn child.

Alexander said there should have been a more thorough investigation before his arrest.

“It’s supposed to be innocent until proven guilty, but now it’s just like everybody’s guilty and you gotta prove yourself innocent. And it’s not right,” he said.

He called for an investigation of the Rowan County Sheriff’s Office and District Attorney’s Office.

Alexander said investigators were not looking for the right person but “just looking to convict somebody.”

“I spent 15 months away from my child for something I didn’t do,” he said.

He said there’s “fishy stuff” going on in Rowan County, where he was born and raised, and that he has been hurt by the negative media attention surrounding the case.

He said he was “sneaked” out of the jail after the dismissal of the charges and that initially, he wasn’t even sure why the charges were being dropped.

Alexander questioned some of the evidence found at his home when he was arrested. He said investigators found cellphone subscriber identity cards at the home that made him look guilty and tied to the murder. But the cards were from old cellphones, he said.

His girlfriend at the time was kicked out of their home after his arrest, he said.

“I lost everything,” he said.

Alexander said he not only wants justice for himself but for Mariah Turner. No other arrests have been made in the case. He also mentioned seeking justice for A’yanna Allen, a young girl who was killed in a drive-by shooting in 2018. Her murder also has not been solved.

He said his voice is not being heard — a problem that plagues others wrongfully incarcerated.

“I hope for everybody who is innocent in here,” he said, pointing toward the jail, “I hope they are set free.”

He wants an apology from the media, the Sheriff’s Office and the District Attorney’s Office.

“My life will never be the same. I’m never going to be the same,” Alexander said.

He said while in jail, he thought about killing himself, then thought about his 3-year-old son. He said he felt that if he took his own life, the investigation into who actually killed Turner would end with him.

No amount of money will change his life moving forward, he said.

Barnette said it’s not about money but about “the climate that allowed him to get in prison.”

“We ask that this young man get justice,” Barnette said.

Alexander said he was traumatized and doesn’t sleep well at night. He also doesn’t feel safe around law enforcement. But he hopes that by sharing his story, he can encourage others.

“We wanted his voice to be heard from Day 1,” said Tamesha Geter, the mother of Alexander’s son.

Alexander has hired Charlotte attorney Charles Everage to represent him.

A “justice rally” is planned at a later date.