Panthers: Backup QB Allen may have to play 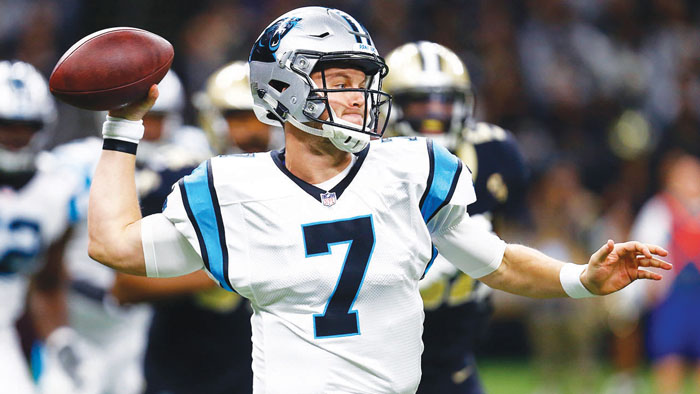 Carolina Panthers photo ... Carolina Panthers’ backup quarterback Kyle Allen may have play on Sunday against the Arizona Cardinals.Starting QB Cam Newton has an injured foot that may sideline him on Sunday.

CHARLOTTE (AP) — Cam Newton’s status for Sunday’s game at Arizona is uncertain after the 2015 league MVP reaggravated a mid-foot sprain.

Newton did not practice Tuesday and Panthers coach Ron Rivera gave no timetable for his QB’s potential return, saying “He’s going to get his treatment, we’ll see how he feels and we’ll adjust to it as we go through it.”

Rivera said backup Kyle Allen would make his second career NFL start for the Panthers against Arizona if Newton isn’t able to play. Rivera said that means the Panthers (0-2) will have to circle the wagons with four of their next five games on the road.

“Does it change things (if Newton is out)? Yes, it changes things dramatically,” Rivera said. “If we’re going to go to end up going with Kyle for a while, yes, we have to find out who we are with him as the quarterback. And going on the road it is going to be a little bit of a challenge.”

Rivera said he first learned that Newton’s foot was sore after Carolina’s 20-14 loss to the Buccaneers Thursday night, although he told reporters after the game “don’t worry about the foot.” After four days of rest and treatment, Newton reported to the team’s headquarters on Tuesday morning but didn’t feel ready to practice.

“He’s going to do everything he can to get back out as soon as he can,” Rivera said.

The 30-year-old Newton originally sprained his left foot in Carolina’s third preseason game against the Patriots but returned to practice in time for the regular season opener. The Panthers have since stumbled to a poor start, losing to the Rams and Buccaneers at home.

Newton’s lack of production has been a major reason why.

He ranks 31st in the NFL in passer efficiency rating (71) among qualifying QBs and has completed just 56 percent of his passes for 572 yards with no touchdown passes and one interception. As a runner, Newton hasn’t been effective either, carrying five times for minus-2 yards with two fumbles, leading to some questions about his long-term future with the team.

Newton has not thrown or run for a touchdown in his last four games dating back to last season when he was plagued by shoulder injuries.

He joins a list of high-profile NFL quarterbacks who could be on the sideline this weekend.

Pittsburgh’s Ben Roethlisberger (elbow) is out for the season, New Orleans’ Drew Brees (hand) is out indefinitely, Jacksonville’s Nick Foles (collarbone) is on injured reserve and Eli Manning of the New York Giants has been benched.

Panthers safety Eric Reid said if Newton is out any length of time he would “welcome” the team signing former 49ers teammate Colin Kaepernick, who remains a free agent. But Reid expressed little hope that would happen, reiterating that he feels league owners won’t sign Kaepernick because of his stance on protesting racial and social injustice.

“The Panthers have not approached me about Colin, but I would welcome that,” Reid said. “As you alluded to, there are a lot of quarterbacks around the league who are in need of a quarterback. Colin is sitting by his phone.”

However, Rivera said he doesn’t expect the Panthers to sign an experienced quarterback at this time, even though Allen and rookie Will Grier only have one career start between them.

“I don’t think so,” Rivera said. “The guys we have here, we brought them here for a reason.”

Allen’s only NFL start came in Week 17 of last season when he led the Panthers to a 33-14 win over the playoff-bound Saints, completing 16 of 27 passes for 266 yards with three total touchdowns.

“Kyle balled last year,” said Panthers wide receiver Jarius Wright. “He came in fully committed to being the starting quarterback and he did his job. He also gave us a chance to do our jobs. Any time that happens you can live with that. It’s that next man up mentality.”

Coach Pat Shurmur announced Tuesday that the No. 6 overall pick in the NFL draft is replacing the two-time Super Bowl MVP as the Giants’ quarterback, beginning Sunday at Tampa Bay.

The move comes less than 24 hours after Shurmur refused to say Manning would remain the starter following two straight losses, the sixth time in seven years New York has gotten off to a 0-2 start.

The 38-year-old Manning has been the Giants’ starter since replacing Kurt Warner after nine games in the 2004 season, the year Manning was traded to New York by San Diego after it took him with the No. 1 overall pick.

Manning led the Giants to Super Bowl titles following the 2007 and ‘11 seasons, beating Tom Brady and the Patriots both times.

“Eli and I spoke this morning,” Shurmur said. “I told him that we are making a change and going with Daniel as the starter. I also talked to Daniel. Eli was obviously disappointed, as you would expect, but he said he would be what he has always been, a good teammate, and continue to prepare to help this team win games. Daniel understands the challenge at hand, and he will be ready to play on Sunday.”

The Giants players had Tuesday off and Manning was not available for comment.

Manning is in the final year of a four-year, $84 million contract that includes a no-trade clause. His salary cap hit this season is $23.2 million.

In two games, Manning completed 56 of 89 passes for 556 yards, two touchdowns and two interceptions for a passer rating of 78.7. But the Giants have scored only four touchdowns, despite averaging 420 yards.

Veteran receiver Golden Tate missed the first two games serving a four-game suspension for using performance enhancers and go-to guy Sterling Shepard was out this past weekend with a concussion.

“Ultimately, this is a move that I felt was best for this team at this time,” said Shurmur, who is in his second season with the Giants. “I have said it since I got here, I am very fond of Eli. His work ethic, his preparation, his football intelligence. All those attributes are as good as I have ever seen in a player. And Eli worked as hard as you could ask of anybody to get ready for this season. This move is more about Daniel moving forward than about Eli.”

The question of when Jones would take over has been a constant topic since the Giants drafted him. It gained momentum when the 22-year-old Duke product completed 29 of 34 passes for 416 yards, two touchdowns, no interceptions in the preseason. His 137.2 quarterback rating was the best in the league.

Jones is much more mobile than Manning and will be able to extend plays with his legs. Manning has been a sitting target for opponents once they get past the O-line. Jones also has shown a good touch with his deep throws.

The hint of an impending change surfaced Monday and a day later, Shurmur benched the man who has been the face of the organization for the past 15-plus years.

Manning, who is playing in a team-record 16th season with the Giants, knew the change was a possibility.

“We’re 0-2 and you are looking for answers,” he said Monday. “I get it, we drafted a guy early and you are not winning games, these things are going to come up. I just have to keep working and do whatever my job is.”

On Sunday, his job will be as Jones’ backup.

Some former teammates were upset with the move.

“So incredibly Disappointed & Frustrated with the @Giants Right now. Defense gives up 63 Points in 2 Games & WR Group is depleted but let’s Change our QB??” said Shaun O’Hara, the center of the ‘07 champions.

Earlier this season, general manager Dave Gettleman said he favored the ‘Kansas City’ model when asked about having a young quarterback. He was referring to Patrick Mahomes, who spent his first season as a backup to Alex Smith, and took over last year.

Giants co-owner John Mara said before the season his hope was Manning would play well enough to remain the starter the whole season.

Jones will be the third of the 11 quarterbacks selected in this year’s draft to both play and start a game. Kyler Murray, the first overall selection by Arizona, started the Cardinals’ first two games. Gardner Minshew, a sixth-round selection by Jacksonville out of Washington State, started the Jaguars’ loss Sunday in Houston as a replacement for the injured Nick Foles.

Manning started 210 consecutive regular-season games from Nov. 21, 2004 to Nov. 23, 2017, the second-longest streak by a quarterback in NFL history. Only Brett Favre (297) started more consecutive games. Manning did not play on Dec. 3, 2017, at Oakland when then-coach Ben McAdoo started Geno Smith instead.

McAdoo and general manager Jerry Reese were fired the next day and Manning returned to running the team, starting the past 22 games.

Patriots are nearly unanimous No. 1 in AP Pro32…