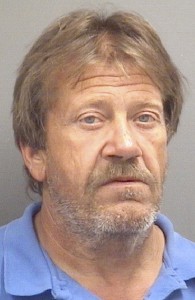 The trial of a China Grove man charged with the murder and robbery of a co-worker in 2016 began last Monday and continues next week.

Terry Bunn, the owner of Terry’s Auto Sales in Kannapolis, told investigators with the Kannapolis Police Department that Davis did not show up for work and he made unsuccessful attempts to reach him by phone. He went to Davis’ Chris Ann Lane home and used a screwdriver to open the locked front door. Bunn said he found Davis dead in a back bedroom and called 911.

Investigators said Dover had called Davis to ask for money as early as May 8 — two days before Davis was found dead. Davis often had large sums of money, according to police. Davis’ daughter, Charlotte, told investigators her father typically barricaded his front door with a chair, but detectives found the chair to the side in the living room.

Kannapolis detectives spoke with Dover on May 10 at his home on Haven Trail in China Grove. Dover and his girlfriend, Carol Carlson, gave consent for investigators to search their home. Investigators found two shirts and a pair of jeans with a reddish-brown stain that appeared to be blood.

Dover voluntarily went to the Kannapolis Police Department and admitted calling Davis but denied involvement in his death. He was released the same day.

Detectives spoke with a woman who said that on May 9, Dover bought a small amount of crack cocaine and later met her to buy a larger amount. The woman said Dover did not typically have much money and she thought it was unusual for him to have some.

Kannapolis police arrested Dover on a charge of driving while license revoked. He admitted buying crack but said the money he used came from neighbors.

Detectives say Dover stole $2,754 and a ring from Davis.

While in jail, Dover called his girlfriend to tell her he had $3,000 hidden in a trash can outside their home. Carlson told investigators she didn’t know where Dover got the money. Dover also couldn’t explain to detectives where the money came from.

Dover’s cellphone records revealed he was near Chris Ann Lane the day Davis was killed, not at home, which is where he told detectives he called Davis from.

In another phone call from jail, Kannapolis detectives discovered Dover’s girlfriend sent him a letter that they said incriminated him and “put him there” at Dover’s home. The letters were found in Dover’s jail cell.

Prosecutors plan to call forensic scientists with expertise in blood and DNA analysis, as well as experts to confirm details of what led to Davis’ death. Defense attorney Pete Hoffman has said he will bring in his own experts, as well as Carlson and other witnesses.

The trial, which began Monday, is expected to take at least another week. If convicted, Dover could receive life in prison without parole.

By Shavonne Walker shavonne.walker@salisburypost.com WOODLEAF — A Woodleaf man beat a woman with a crowbar, sledgehammer and ax until she... read more